Burn It All Down Panel with Sarah Gailey, Max Gladstone, and Ryan Van Loan 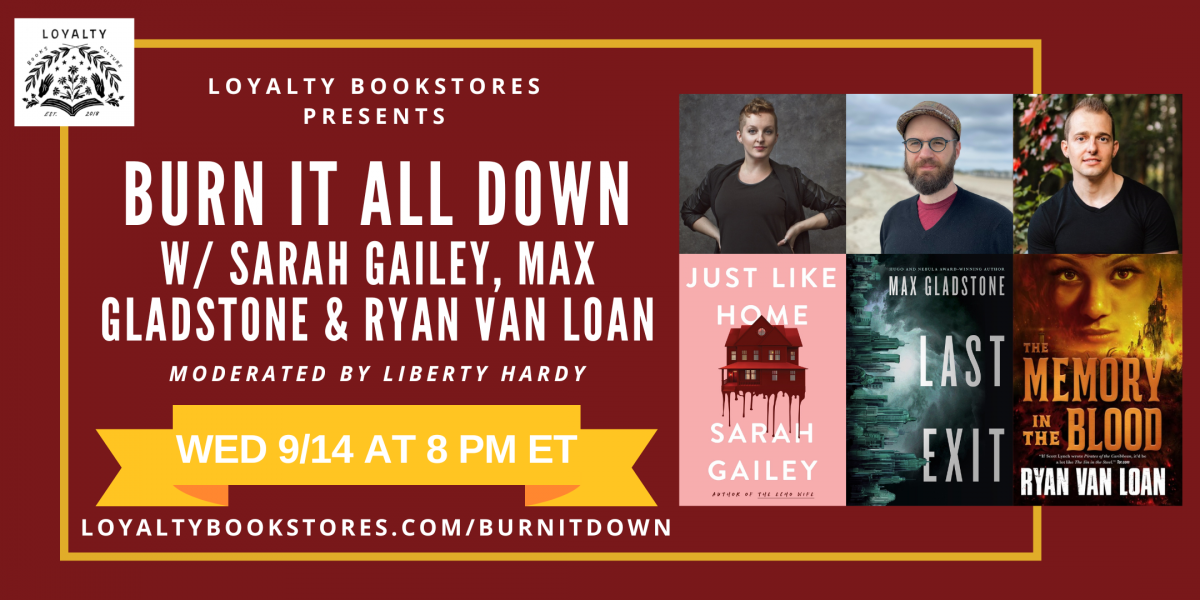 Loyalty is thrilled to host a Burn It All Down panel celebrating fiery recent releases from Sarah Gailey (Just Like Home), Max Gladstone (Last Exit), and Ryan Van Loan (The Memory in the Blood), moderated by Liberty Hardy! This event will be held digitally via Crowdcast. Click here to register for the event with a donation of any amount of your choice. You can also order the book below to be added to the event's registration list. Donations will go to the Trans Women of Color Collective. There will also be an option to snag the books during the event.

Just Like Home is a darkly gothic thriller from nationally bestselling author Sarah Gailey, perfect for fans of Netflix's The Haunting of Hill House as well as HBO's true crime masterpiece I'll Be Gone in the Dark.

“Come home.” Vera’s mother called and Vera obeyed. In spite of their long estrangement, in spite of the memories — she's come back to the home of a serial killer. Back to face the love she had for her father and the bodies he buried there, beneath the house he'd built for his family.

Coming home is hard enough for Vera, and to make things worse, she and her mother aren’t alone. A parasitic artist has moved into the guest house out back and is slowly stripping Vera’s childhood for spare parts. He insists that he isn’t the one leaving notes around the house in her father’s handwriting… but who else could it possibly be?

There are secrets yet undiscovered in the foundations of the notorious Crowder House. Vera must face them and find out for herself just how deep the rot goes.

When Zelda and her friends first met, in college, they believed they had all the answers. They had figured out a big secret about how the world worked and they thought that meant they could change things.

They failed. One of their own fell, to darkness and rot.

Ten years later, they've drifted apart, building lives for themselves, families, fortunes. All but Zelda. She's still wandering the backroads of the nation. She's still fighting monsters. She knows: the past isn't over. It's not even past.

The road's still there. The rot's still waiting. They can't hide from it any more. Because, at long last, their friend is coming home. And hell is coming with her.

ABOUT THE MEMORY IN THE BLOOD

The Memory in the Blood is the pulse-pounding conclusion to Ryan Van Loan's The Fall of the Gods series, featuring sea battles, hidden libraries, warring deities, old enemies, and one woman's desire for liberation and revenge.

When her quest to destroy the Gods began, Buc was a child of the streets. Now she is a woman of steel, shaped by gaining and losing power, tempered by love and betrayal, and honed to a fine edge by grief and her desire for vengeance.

A perilous, clandestine mission to a hidden library uncovers information that is key to destroying both the Dead Gods and their enemy, the Goddess Ciris. Ciris's creation, Sin, who lives inside Buc, gives her superhuman abilities and tempts her with hints of even greater power. With that power, she could achieve almost anything—end the religious war tearing her world apart, remake society at a stroke—but the price would be the betrayal of everything she has fought for . . . and the man she loved would still be dead.

In the middle of this murderous, magical maelstrom, a coded message smuggled out of the heart of the Dead Gods' cathedral reveals that the Dead Gods intend to destroy Ciris—and much of the world with her.

If Buc has to destroy all Gods, eat the rich, and break the world's economy to save the people, she will do it. Even if it costs her everything.

Hugo Award Winner and Bestselling author Sarah Gailey is an internationally published writer of fiction and nonfiction. Their nonfiction has been published by Mashable and The Boston Globe. Their short fiction credits include Vice and The Atlantic. Their debut novella, River of Teeth, was a 2018 Hugo and Nebula award finalist. Their bestselling adult novel debut, Magic For Liars, was published in 2019, and their second novel, The Echo Wife, was published in 2021.

Max Gladstone is a fencer, a fiddler, and the winner of the Hugo and Nebula Awards for This is How You Lose the Time War, co-written with Amal El-Mohtar. A two-time finalist for the John W. Campbell Award, he is fluent in Mandarin and has taught English in China. He is also the author of the Craft Sequence of novels (a Hugo Award finalist), a game developer, and the showrunner for the fiction serial, Bookburners. Max lives and writes in Somerville, Massachusetts. You can find him online at maxgladstone.com and on Twitter as @maxgladstone.

Ryan Van Loan (he/him) served six years in the US Army Infantry, on the front lines of Afghanistan. He now works in healthcare innovation. The Sin in the Steel is his debut novel. Van Loan and his wife live in Pennsylvania.

Liberty Hardy is a senior contributing editor for Book Riot and cohost of the popular All the Books! podcast. She lives in the great state of Maine, where she reads over 600 books a year and hangs out with her three cats, who hate to read.