Cat Fitzpatrick and Cecilia Gentili for THE CALL-OUT and FALTAS *In-Person!* 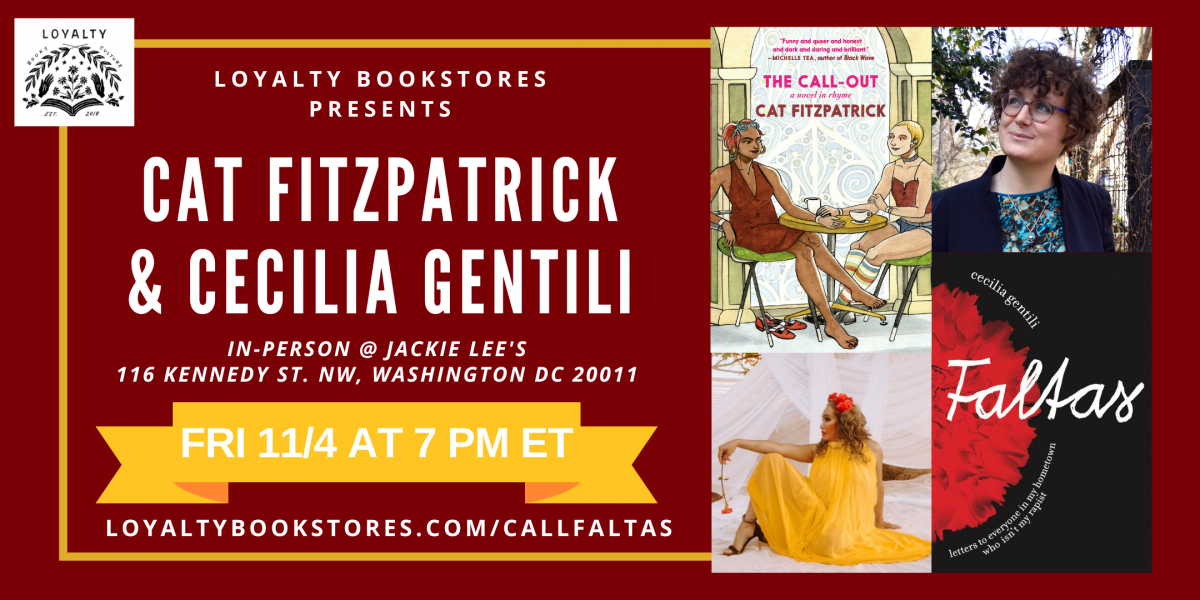 Loyalty is excited to welcome Cat Fitzpatrick and Cecilia Gentili for a LIVE and IN-PERSON event celebrating their new releases, The Call-Out and Faltas! Join us at Jackie Lee's at 7 PM on Friday, November 4th for a fun and festive discussion with these two fabulous authors, followed by a meet + greet & book signing!

This is a ticketed event taking place at Jackie Lee's at 116 Kennedy St. NW, Washington DC 20011—grab your tickets using the button below! There are two ticket options: one includes a special cocktail, and one is a free general admission ticket. Copies of both books will be available for sale at the event. Proof of vaccination is required to attend this event. Please email events@loyaltybookstores.com with any questions.

A novel written in verse, The Call-Out recalls the Russian literary classic Eugene Onegin, but instead of 19th century Russian aristocrats crudely solved their disagreements with pistols, the participants in this rhyming drama have developed a more refined weapon, the online call-out, a cancel-culture staple. In this passionate tangle of modern relationships, where a barbed tweet can be as dangerous as the narrator’s bon-mots, Cat Fitzpatrick has fashioned a modern novel of manners that gives readers access to a vibrant cultural underground.

A rich and moving epistolary memoir about transgender childhood, sexual trauma, motherhood, and a young queer life in 1970s Argentina

In these hilarious and heartbreaking letters, Cecilia Gentili reinvents the trans memoir, putting the confession squarely between the writer and her enemies, paramours and friends. Writing to childhood figures such as her rapist's daughter, her father's mistress, her best friend, and her mother, Gentili probes deeply into the bitter cruelty, buried secrets, and delicious gossip of a small town. Is she here for revenge, or forgiveness? Both. And more. A story of sex, theft, murder, motherhood, and outrageous fashion choices, Faltas is a beautiful, messy meditation on what it takes to heal, and even grow.

A painstaking, personal and power-filled manifesto for survivors and trans women and anyone dreaming and yearning on the margins. Faltas is as intentional, resilient, original and acerbic as its activist author.--Janet Mock, author of Redefining Realness & Surpassing Certainty

Cat Fitzpatrick is the first trans woman to serve as Director of the Women’s and Gender Studies program at Rutgers University–Newark, and the Editrix at LittlePuss Press. She is the author of a collection of poems, Glamour­puss (Topside Press) and co-edited the anthology Meanwhile, Elsewhere: Science Fiction & Fantasy from Transgender Writers, which won the ALA Stonewall Award for Literature. The Call-Out is her first novel.
Cecilia Gentili is: an activist, who founded Transgender Equity Consulting after serving as the Director of Policy at GMHC; a performer, whose one woman-show, The Knife Cuts Both Ways, ran at Dixon Place Theatre in New York City, and who appeared as Ms. Orlando on Pose; and a writer, whose memoir Faltas: Letters To Everyone In My Hometown Who Isn't My Rapist is out now from LittlePuss Press.
Please note Loyalty has a zero tolerance policy for harassment or intimidation of any kind during this event.
Event date:
Friday, November 4, 2022 - 7:00pm
Event address:
Jackie Lee's
116 Kennedy St. NW
Washington, DC 20011

The Call-Out: A Novel in Rhyme (Paperback)

Faltas: Letters to Everyone in My Hometown Who Isn't My Rapist (Paperback)