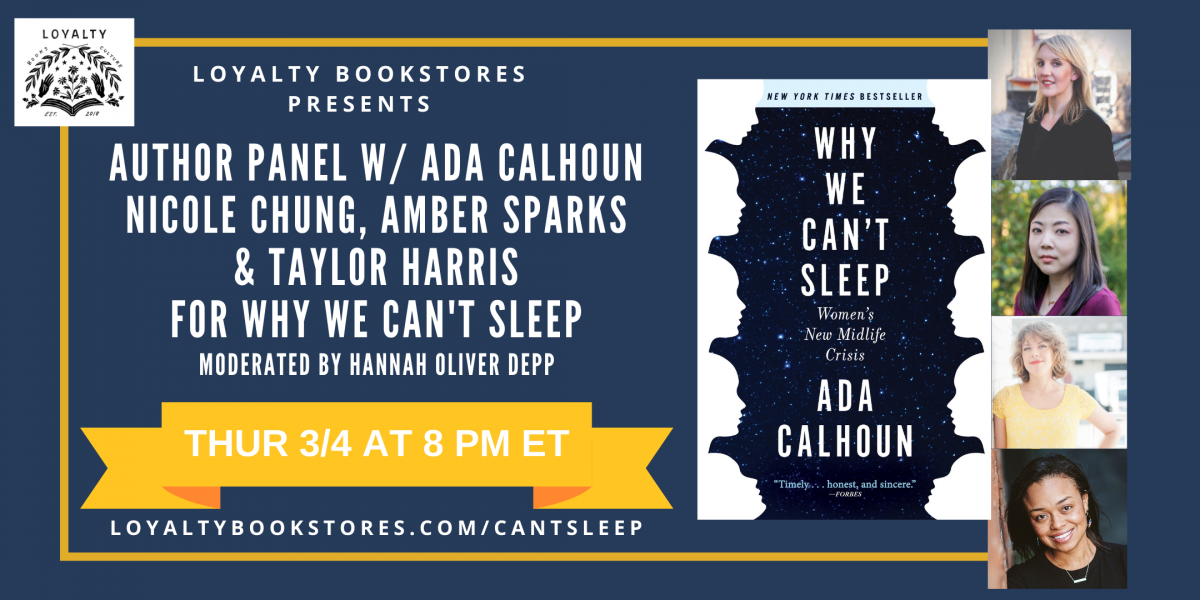 Join us in celebrating the paperback release of Why We Can't Sleep: Women's New Midlife Crisis with Ada Calhoun, Nicole Chung, Amber Sparks, and Taylor Harris! Loyalty's owner Hannah Oliver Depp is moderating this panel discussion of amazing authors. This event will be held digitally via Crowdcast. Click here to register for the event with a donation of any amount of your choice. Donations will go to Black Lives Matter DC. You can order the book on our website to be automatically registered for the event, and there will also be an option to get the book during the event.

When Ada Calhoun found herself in the throes of a midlife crisis, she thought that she had no right to complain. She was married with children and a good career. So why did she feel miserable? And why did it seem that other Generation X women were miserable, too?

Calhoun decided to find some answers. She looked into housing costs, HR trends, credit card debt averages, and divorce data. At every turn, she saw a pattern: sandwiched between the Boomers and the Millennials, Gen X women were facing new problems as they entered middle age, problems that were being largely overlooked.

Speaking with women across America about their experiences as the generation raised to "have it all," Calhoun found that most were exhausted, terrified about money, under-employed, and overwhelmed. Instead of being heard, they were told instead to lean in, take "me-time," or make a chore chart to get their lives and homes in order.

In Why We Can't Sleep, Calhoun opens up the cultural and political contexts of Gen X's predicament and offers solutions for how to pull oneself out of the abyss--and keep the next generation of women from falling in. The result is reassuring, empowering, and essential reading for all middle-aged women, and anyone who hopes to understand them.

Ada Calhoun is the author of the memoir Wedding Toasts I'll Never Give, named an Amazon Book of the Month and one of the top ten memoirs of 2017 by W magazine; and the history St. Marks Is Dead, one of the best books of 2015, according to Kirkus and the Boston Globe. She has collaborated on several New York Times bestsellers, and written for the New York Times, New York, and The New Republic.

Nicole Chung is the author of the national bestseller All You Can Ever Know. Named a Best Book of the Year by The Washington Post, NPR, TIME, Library Journal, and many other outlets, All You Can Ever Know was a finalist for the National Book Critics Circle Award, a semifinalist for the PEN Open Book Award, an Indies Choice Honor Book, and an official Junior Library Guild Selection. Chung’s writing has appeared in The New York Times, The New York Times Magazine, The Guardian, and GQ, among others, and she also writes a weekly advice column for Slate. Her next book is forthcoming from Ecco Books/HarperCollins.

Amber Sparks is the author of several short story collections, including The Unfinished World and Other Stories, and I Do Not Forgive You (Liveright). Her essays and fiction can be found widely in print and online, in places like The Paris Review, NYMag, Granta, and Tin House.

Taylor Harris lives in Charlottesville, VA, and enjoys writing about race, motherhood, and health. This Boy We Made: A Memoir of Motherhood, Genetics, and Facing the Unknown is forthcoming from Catapult in early 2022.

Hannah Oliver Depp is the owner of Loyalty Bookstores in Petworth, DC and Silver Spring, MD. Loyalty serves all readers as a diverse, intersectional feminist bookstore and programming space. She holds a Masters in English from American University. Oliver Depp is a founding member of the American Bookselling Association Committee on Diversity, Equity, and Inclusion and serves on the boards of Bookshop.org and the New Atlantic Independent Bookselller’s Assocation.

And I Do Not Forgive You: Stories and Other Revenges (Hardcover)