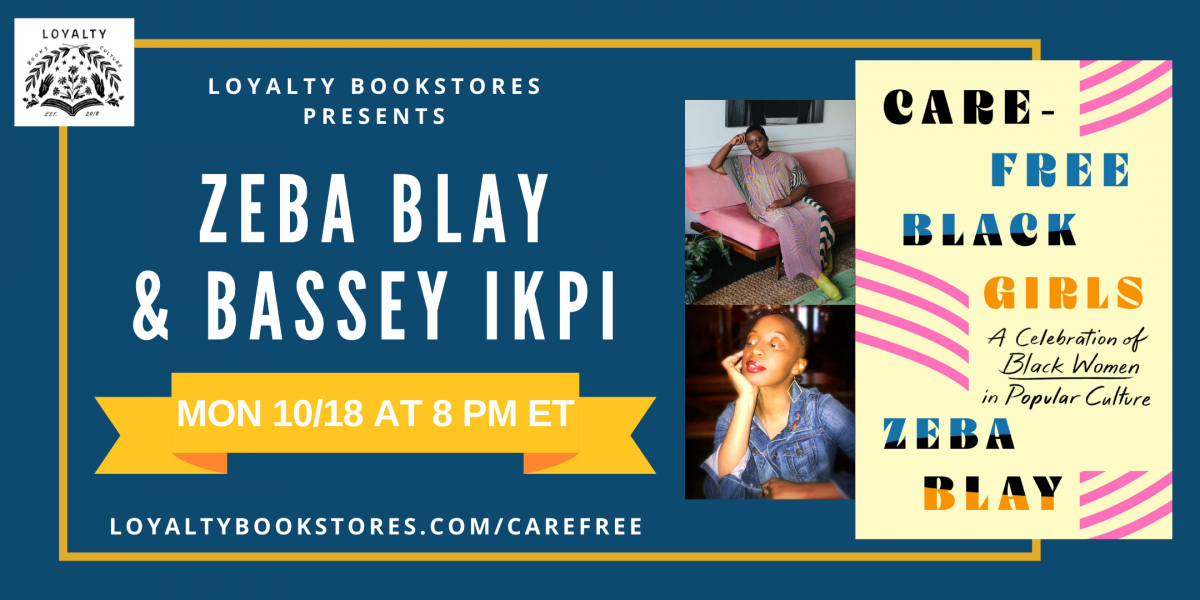 Loyalty is so excited to celebrate Carefree Black Girls: A Celebration of Black Women in Popular Culture with Zeba Blay and Bassey Ikpi! This event will be held digitally via Crowdcast. Click here to register for the event with a donation of any amount of your choice or you can order the book below to be added to the event's registration list. Donations will go to BLM DC. There will also be an option to snag the book during the event.

An empowering and celebratory portrait of Black women—from Josephine Baker to Aunt Viv to Cardi B.

In 2013, film and culture critic Zeba Blay was one of the first people to coin the viral term #carefreeblackgirls on Twitter. As she says, it was “a way to carve out a space of celebration and freedom for Black women online.”

In this collection of essays, Carefree Black Girls, Blay expands on this initial idea by delving into the work and lasting achievements of influential Black women in American culture--writers, artists, actresses, dancers, hip-hop stars--whose contributions often come in the face of bigotry, misogyny, and stereotypes. Blay celebrates the strength and fortitude of these Black women, while also examining the many stereotypes and rigid identities that have clung to them. In writing that is both luminous and sharp, expansive and intimate, Blay seeks a path forward to a culture and society in which Black women and their art are appreciated and celebrated.

Zeba Blay is a film and culture critic who has contributed to publications including The New York Times, The Village Voice, ESSENCE, Shadow and Act, Film Quarterly, and Indiewire. Formerly Senior Culture Writer at HuffPost, Blay has spent her nearly decade-long career writing about pop culture at the intersection of race, gender, and identity. Born in Accra, Ghana, she is based in the New York City area.

Bassey Ikpi embodies the brilliance of multifaceted creative minds. The writer, performer, and advocate is author of the instant New York Times bestselling book, I’m Telling the Truth, but I’m Lying (Harper Perennial 2019). Essence Magazine esteemed this debut collection of essays as “beautiful and compelling,” while Audible defines the writing as both “visceral” and “comforting.” The compilation, which went into a second pressing on the day of its release, has earned the mental health activist stunning reviews from readers and media outlets nationwide. Whether written or spoken, Bassey is effortlessly clever--an alchemy of intellect, humor, and pathos. Appearing on stages and screens across the world as a public speaker and TV personality, Bassey first gained public acclaim as an internationally recognized poet. In a past life, she was a featured poet on HBO’s Def Poetry Jam and toured with its Tony Award-winning Broadway show. Also an active voice in pop culture commentary and the mental health community, Bassey has been published by The Root, Huffington Post, and Essence, as well as in anthologies including Rookie On Love from acclaimed editor Tavi Gevinson. Bassey has also been commissioned by Nike’s global nonprofit Girls Effect, writing and performing the short film, Invisible Barriers.