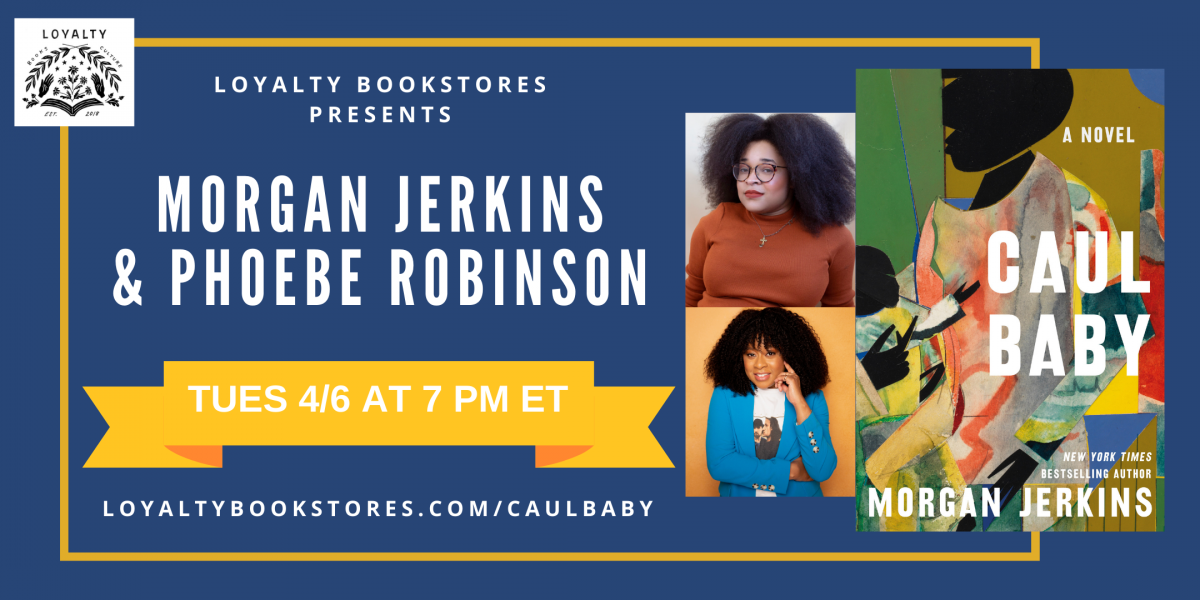 Loyalty is super psyched to be a bookstore partner for the celebration of Caul Baby with Morgan Jerkins and Phoebe Robinson!  This event will be held digitally on the publisher's Crowdcast channel. In order to be registered for the event, you can purchase a signed* copy of Caul Baby below (*while supplies last). All attendees will receive a link and event code the day before the event from the publisher via Crowdcast. Please email events@loyaltybookstores.com with any questions.

New York Times bestselling author Morgan Jerkins makes her fiction debut with this electrifying novel, for fans of Ta-Nehisi Coates and Jacqueline Woodson, that brings to life one powerful and enigmatic family in a tale rife with secrets, betrayal, intrigue, and magic.

Laila desperately wants to become a mother, but each of her previous pregnancies has ended in heartbreak. This time has to be different, so she turns to the Melancons, an old and powerful Harlem family known for their caul, a precious layer of skin that is the secret source of their healing power.

When a deal for Laila to acquire a piece of caul falls through, she is heartbroken, but when the child is stillborn, she is overcome with grief and rage. What she doesn’t know is that a baby will soon be delivered in her family—by her niece, Amara, an ambitious college student—and delivered to the Melancons to raise as one of their own. Hallow is special: she’s born with a caul, and their matriarch, Maman, predicts the girl will restore the family’s prosperity.

Growing up, Hallow feels that something in her life is not right. Did Josephine, the woman she calls mother, really bring her into the world? Why does her cousin Helena get to go to school and roam the streets of New York freely while she’s confined to the family’s decrepit brownstone?

As the Melancons’ thirst to maintain their status grows, Amara, now a successful lawyer running for district attorney, looks for a way to avenge her longstanding grudge against the family. When mother and daughter cross paths, Hallow will be forced to decide where she truly belongs.

Engrossing, unique, and page-turning, Caul Baby illuminates the search for familial connection, the enduring power of tradition, and the dark corners of the human heart.

Morgan Jerkins is the author of Wandering in Strange Lands and the New York Times bestseller This Will Be My Undoing. A visiting professor at Columbia University and a Forbes 30 under 30 Leader in Media, Jerkins's short form work has been featured in The New Yorker, The New York Times, The Atlantic, Rolling Stone, ELLE, Esquire, and The Guardian, among many others. She is based in Harlem.

Phoebe Robinson is best known as the co-creator and co-star of the hit WNYC Studios podcast 2 Dope Queens, which was turned into eight one-hour, critically-acclaimed HBO specials. She’s also a New York Times best-selling author of the books Everything’s Trash, But It’s Okay and You Can’t Touch My Hair and Other Things I Still Have to Explain. Additionally, Phoebe was a staff writer on the final season of Portlandia, starred in the movies Ibiza and What Men Want, and was a five-time moderator on Michelle Obama's international Becoming book tour. Most recently, Phoebe founded Tiny Reparations, a production company under ABC Studios, and TinyRep’s first project, a talk show entitled Doing the Most w/Phoebe Robinson, will premiere in 2021 on Comedy Central.
She has also just launched a literary imprint called Tiny Reparations Books and released a brand-new advice-interview hybrid podcast entitled Black Frasier.

Wandering in Strange Lands: A Daughter of the Great Migration Reclaims Her Roots (Hardcover)

This Will Be My Undoing: Living at the Intersection of Black, Female, and Feminist in (White) America (Paperback)

Everything's Trash, But It's Okay (Paperback)

You Can't Touch My Hair: And Other Things I Still Have to Explain (Paperback)

Please Don't Sit on My Bed in Your Outside Clothes: Essays (Hardcover)