Celeste Ng and Dolen Perkins-Valdez for OUR MISSING HEARTS *In-Person!* 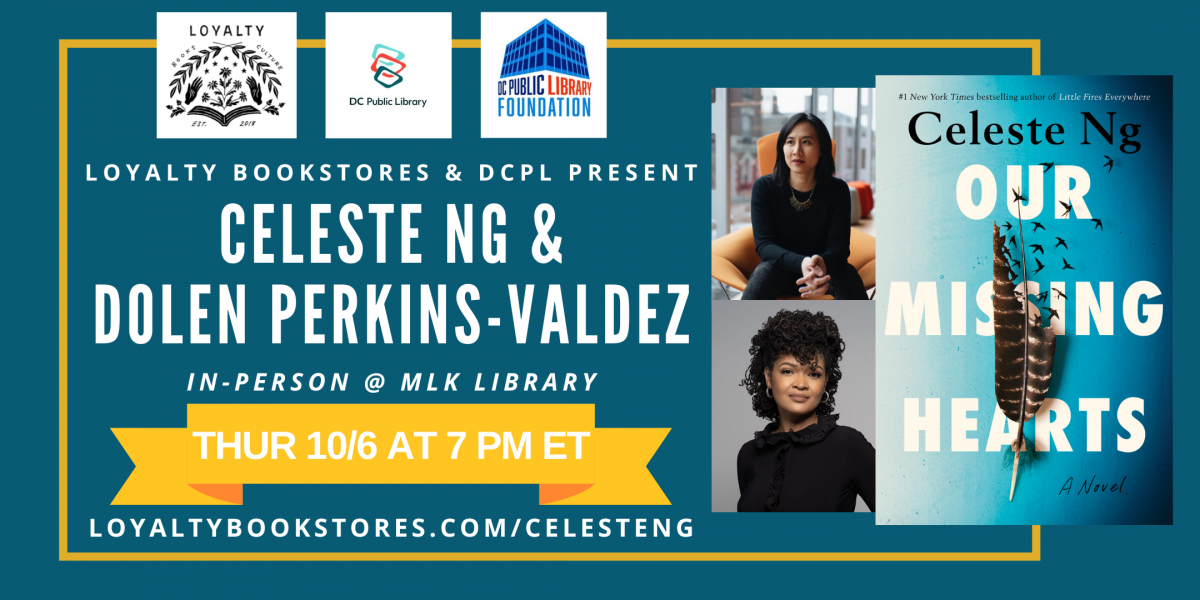 Join Loyalty Bookstores and DC Public Library for a live, in-person event with Celeste Ng and Dolen Perkins-Valdez for Our Missing Hearts! This event will take place at DCPL's MLK Library location. This is a ticketed event and you must order a ticket from Loyalty to attend—please select your ticket option using the button below. **Proof of vaccination and face masks are required for all attendees.** We will have additional copies of Celeste's and Dolen's books available for sale at the event. This event will also be livestreamed on DCPL's Youtube channel. Please email events@loyaltybookstores.com with any questions.

One of The Millions’ Most-Anticipated Books of 2022

“As lyrical as it is chilling, as astonishing as it is empathic, Our Missing Hearts arguably achieves literary perfection.”  —Booklist (starred review)

From the number one bestselling author of Little Fires Everywhere, a deeply suspenseful and heartrending novel about the unbreakable love between a mother and child in a society consumed by fear

Twelve-year-old Bird Gardner lives a quiet existence with his loving but broken father, a former linguist who now shelves books in a university library. Bird knows to not ask too many questions, stand out too much, or stray too far. For a decade, their lives have been governed by laws written to preserve “American culture” in the wake of years of economic instability and violence. To keep the peace and restore prosperity, the authorities are now allowed to relocate children of dissidents, especially those of Asian origin, and libraries have been forced to remove books seen as unpatriotic—including the work of Bird’s mother, Margaret, a Chinese American poet who left the family when he was nine years old.

Bird has grown up disavowing his mother and her poems; he doesn’t know her work or what happened to her, and he knows he shouldn’t wonder. But when he receives a mysterious letter containing only a cryptic drawing, he is pulled into a quest to find her. His journey will take him back to the many folktales she poured into his head as a child, through the ranks of an underground network of librarians, into the lives of the children who have been taken, and finally to New York City, where a new act of defiance may be the beginning of much-needed change.

Our Missing Hearts is an old story made new, of the ways supposedly civilized communities can ignore the most searing injustice. It’s a story about the power—and limitations—of art to create change, the lessons and legacies we pass on to our children, and how any of us can survive a broken world with our hearts intact.

Celeste Ng is the number one New York Times bestselling author of Everything I Never Told You and Little Fires Everywhere. Her third novel, Our Missing Hearts, will be published in October 2022. Ng is the recipient of fellowships from the National Endowment for the Arts and the Guggenheim Foundation, and her work has been published in over thirty languages.

Dolen Perkins-Valdez is the New York Times bestselling author of Wench and Balm. She was a finalist for two NAACP Image Awards and the Hurston/Wright Legacy Award for fiction, and she was awarded the First Novelist Award by the Black Caucus of the American Library Association. She lives in Washington, DC with her family.

Our Missing Hearts: A Novel (Hardcover)

Everything I Never Told You: A Novel (Paperback)