Ingrid Rojas Contreras and Daisy Hernández for THE MAN WHO COULD MOVE CLOUDS *In-Person!* 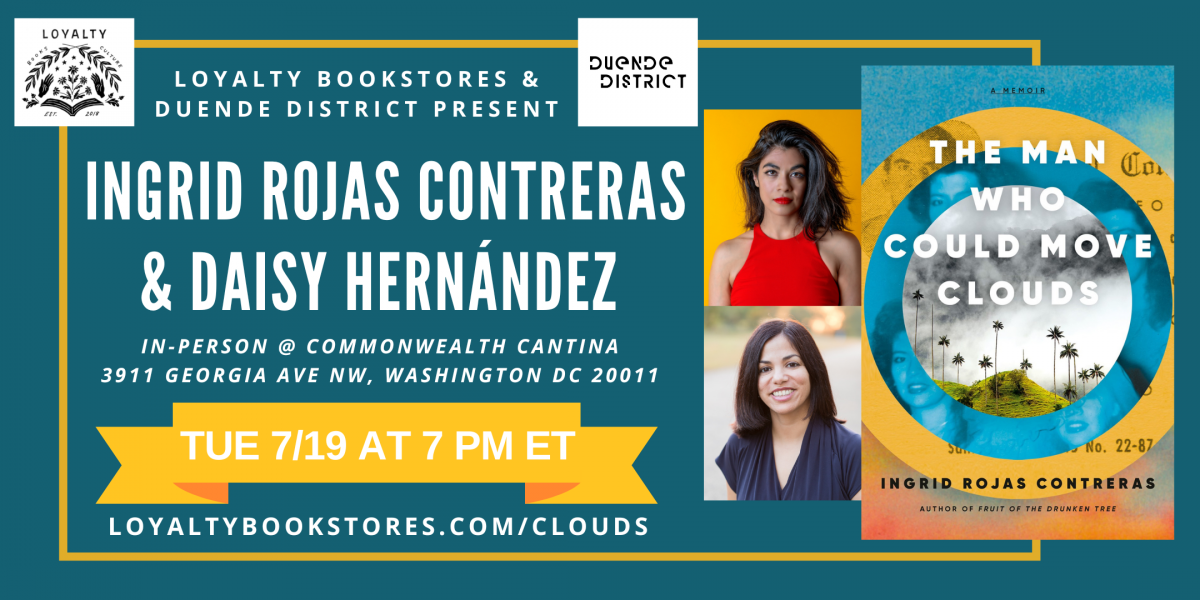 Loyalty and Duende District are thrilled to host Ingrid Rojas Contreras and Daisy Hernández for a LIVE and IN-PERSON event celebrating The Man Who Could Move Clouds! Join us at Commonwealth Cantina at 7 PM on Tuesday, July 19th for a fantastic chat between Ingrid and Daisy, followed by a book signing!

This is a ticketed event taking place at Commonwealth Cantina at ​3911 Georgia Ave NW, ​Washington, DC 20011—grab your tickets using the button below! There are two ticket options: one includes a copy of The Man Who Could Move Clouds and admission to the event, and the other is a $5 general admission ticket. Additional copies of The Man Who Could Move Clouds, as well as copies of Ingrid's and Daisy's other books, will be available for sale at the event. Proof of vaccination will be required, as well as a temperature check at the door. Please email events@loyaltybookstores.com with any questions.

A TIME BEST BOOK OF THE SUMMER

From the author of the “original, politically daring and passionately written” (Vogue) novel Fruit of the Drunken Tree, comes a dazzling, kaleidoscopic memoir reclaiming her family's otherworldly legacy.

For Ingrid Rojas Contreras, magic runs in the family. Raised amid the political violence of 1980s and '90s Colombia, in a house bustling with her mother’s fortune-telling clients, she was a hard child to surprise. Her maternal grandfather, Nono, was a renowned curandero, a community healer gifted with what the family called “the secrets”: the power to talk to the dead, tell the future, treat the sick, and move the clouds. And as the first woman to inherit “the secrets,” Rojas Contreras’ mother was just as powerful. Mami delighted in her ability to appear in two places at once, and she could cast out even the most persistent spirits with nothing more than a glass of water.

This legacy had always felt like it belonged to her mother and grandfather, until, while living in the U.S. in her twenties, Rojas Contreras suffered a head injury that left her with amnesia. As she regained partial memory, her family was excited to tell her that this had happened before: Decades ago Mami had taken a fall that left her with amnesia, too. And when she recovered, she had gained access to “the secrets.”

In 2012, spurred by a shared dream among Mami and her sisters, and her own powerful urge to relearn her family history in the aftermath of her memory loss, Rojas Contreras joins her mother on a journey to Colombia to disinter Nono’s remains. With Mami as her unpredictable, stubborn, and often hilarious guide, Rojas Contreras traces her lineage back to her Indigenous and Spanish roots, uncovering the violent and rigid colonial narrative that would eventually break her mestizo family into two camps: those who believe “the secrets” are a gift, and those who are convinced they are a curse.

Interweaving family stories more enchanting than those in any novel, resurrected Colombian history, and her own deeply personal reckonings with the bounds of reality, Rojas Contreras writes her way through the incomprehensible and into her inheritance. The result is a luminous testament to the power of storytelling as a healing art and an invitation to embrace the extraordinary.

Ingrid Rojas Contreras was born and raised in Bogotá, Colombia. Her debut novel Fruit of the Drunken Tree was the silver medal winner in First Fiction from the California Book Awards, and a New York Times editor's choice. Her essays and short stories have appeared in the New York Times Magazine, The Believer, and Zyzzyva, among others. She lives in California

Daisy Hernández is the author of The Kissing Bug: A True Story of a Family, an Insect, and a Nation’s Neglect of a Deadly Disease, which won the 2022 PEN /Jean Stein Book Award and was selected as an inaugural title for the National Book Foundation’s Science + Literature Program. She is also the author of the award-winning memoir A Cup of Water Under My Bed and coeditor of Colonize This! Young Women of Color on Today's Feminism. The former editor of ColorLines magazine, she has reported for the New York Times, National Geographic, The Atlantic, and Slate, and she is an Associate Professor at Miami University in Ohio.

The Man Who Could Move Clouds: A Memoir (Hardcover)