Nicole Glover and P. Djèlí Clark for THE CONDUCTORS 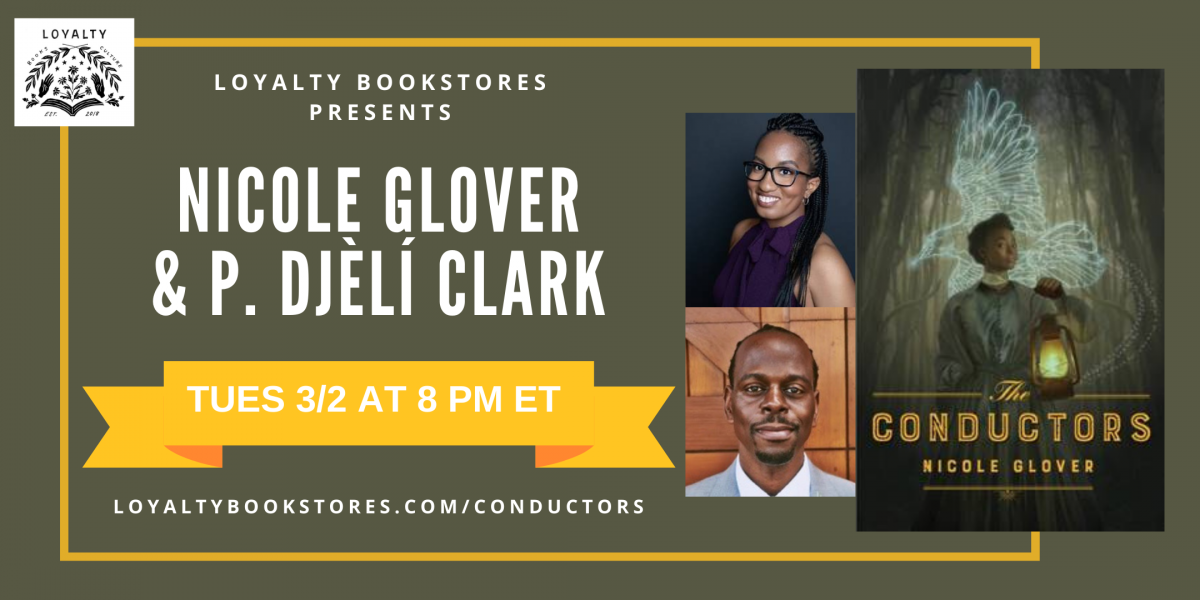 Loyalty is super psyched to celebrate the release of The Conductors with Nicole Glover and P. Djéli Clark!! The Conductors is one of most anticipated 2021 releases and we can't wait to chat with these two brilliant authors. This event will be held digitally via Crowdcast. Click here to register for the event with a donation of any amount of your choice. Donations will go to Black Lives Matter DC. You can order the book below and there will also be an option to buy the book during the event. If you purchase the book from our website, you'll be automatically registered for the event.

A compelling debut by a new voice in fantasy fiction, The Conductors features the magic and mystery of Jim Butcher’s Dresden Files series written with the sensibility and historical setting of Octavia Butler’s Kindred. Meet Hetty Rhodes, a magic-user and former conductor on the Underground Railroad who now solves crimes in post–Civil War Philadelphia.

As a conductor on the Underground Railroad, Hetty Rhodes helped usher dozens of people north with her wits and magic. Now that the Civil War is over, Hetty and her husband, Benjy, have settled in Philadelphia, solving murders and mysteries that the white authorities won’t touch. When they find one of their friends slain in an alley, Hetty and Benjy bury the body and set off to find answers. But the secrets and intricate lies of the elites of Black Philadelphia only serve to dredge up more questions. To solve this mystery, they will have to face ugly truths all around them, including the ones about each other.

In this vibrant and original novel, Nicole Glover joins a roster of contemporary fantasy writers, such as Victor LaValle and Zen Cho, who use speculative fiction to delve into important historical and cultural threads.

NICOLE GLOVER works as a UX researcher in Virginia. She believes libraries are magical places and problems seem smaller with a cup of tea in hand. Her life outside of books include bicycles, video games, and baking the perfect banana bread. The Conductors is her debut novel. She can be found at nicole-glover.com.

Phenderson Djéli Clark is the award winning and Hugo, Nebula, Sturgeon, and World Fantasy nominated author of the novellas The Black God’s Drums and The Haunting of Tram Car 015. His stories have appeared in online venues such as Tor.com, Daily Science Fiction, Heroic Fantasy Quarterly, Apex, Lightspeed, Fireside Fiction, Beneath Ceaseless Skies, and in print anthologies including, Griots, Hidden Youth and Clockwork Cairo. He is a founding member of FIYAH Literary Magazine and an infrequent reviewer at Strange Horizons.