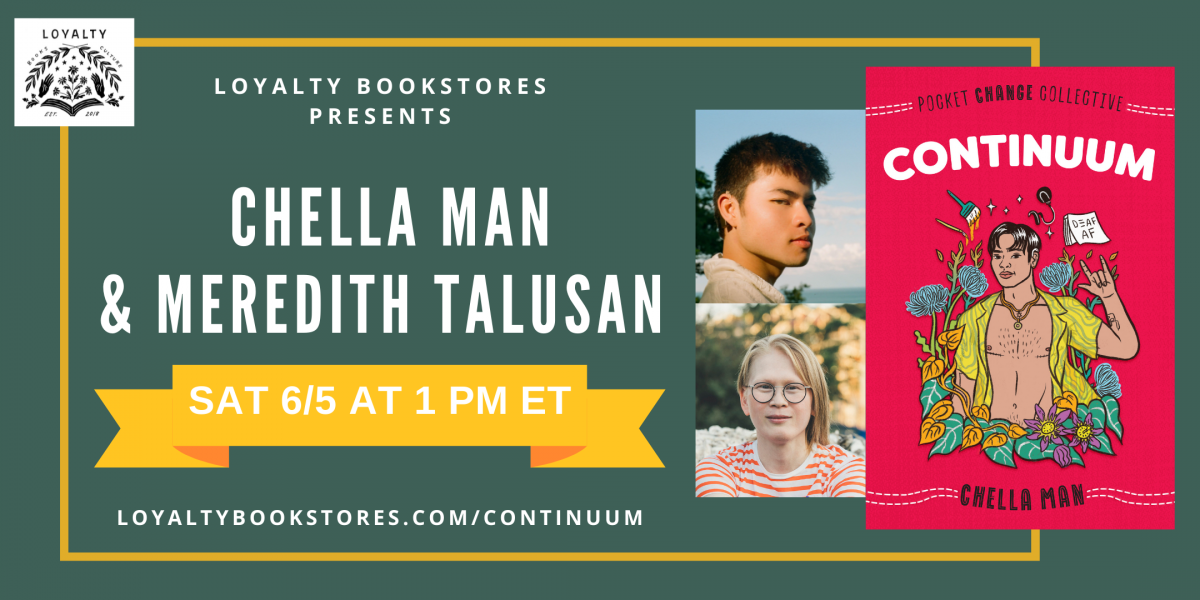 Loyalty is so excited to welcome Chella Man and Meredith Talusan to celebrate the release of Continuum! This event will be held digitally via Crowdcast. Click here to register for the event with a donation of any amount of your choice or you can order the book below to be added to the event's registration list. Donations will go to Deaf Queer Resource Center. There will also be an option to snag the book during the event. ASL interpretation will be provided.

Pocket Change Collective was born out of a need for space. Space to think. Space to connect. Space to be yourself. And this is your invitation to join us.

Chella chronicles the value in creating your own mold in order to reclaim your space and to feel represented in this always ever-evolving world, and he inspires others to stretch what it means to be human--and there's no right way.--Nyle DiMarco (model, actor, and Deaf activist)

Full of heart, grace and precision, Chella Man charts his path toward himself in a world not yet equipped for all he encompasses. An affirming, artistic and accessible primer for anyone searching for themselves or yearning to learn about others.--Janet Mock (Bestselling author of Redefining Realness and Surpassing Certainty)

Chella is the future. A total visionary and a wonderful example of a human being in every way. A master of empathy, courage, and growth.--Jameela Jamil (actress, model, writer, and activist)

Navigating social norms can be so damn confusing and traumatic as a kid, but Chella shows that there is always a degree of dignity behind each step as we venture closer to the self.--Christine Sun Kim (sound artist and composer)

Chella Man's journey is as compelling as it is brave and candid. I can't even imagine all the boxes people wanted to put him into and yet, he has emerged triumphant. His story will resonate with anyone who has a desire to be their true self. I can't wait to see the next chapter of his extraordinary life. --Marlee Matlin (Academy Award and Golden Globe-winning actress, author, and activist)

In Continuum, fine artist, activist, and Titans actor Chella Man uses his own experiences as a deaf, transgender, genderqueer, Jewish person of color to talk about cultivating self-acceptance and acting as one's own representation.

Pocket Change Collective is a series of small books with big ideas from today's leading activists and artists.

What constructs in your life must you unlearn to support inclusivity and respect for all? This is a question that artist, actor, and activist Chella Man wrestles with in this powerful and honest essay. A story of coping and resilience, Chella journeys through his experiences as a deaf, transgender, genderqueer, Jewish person of color, and shows us that identity lies on a continuum -- a beautiful, messy, and ever-evolving road of exploration.

Renowned for his personal documentation of his experience in gender transition, Chella Man is celebrated for his motto "be your own representation." As a deaf, genderqueer, Chinese, and Jewish individual, Chella found he didn't have role models to look up to, and so he became a voice and a true representation for himself and for others. With over 290K subscribers and many millions of views on his YouTube video entitled "One year on testosterone: voice updates," Chella is normalizing the conversation around gender issues for disabled and LGBTQ+ youth.