Keenan Norris and Victor LaValle for THE CONFESSION OF COPELAND CANE 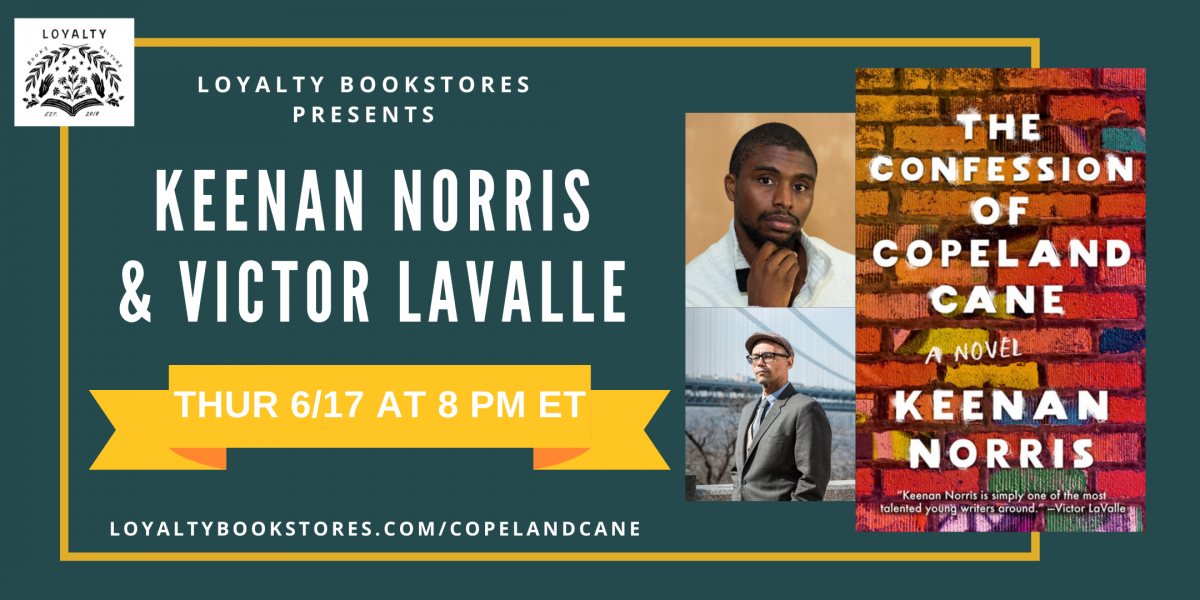 Loyalty is super psyched to celebrate the release of The Confession of Copeland Cane with Keenan Norris and Victor LaValle! This event will be held digitally via Crowdcast. Click here to register for the event with a donation of any amount of your choice or you can order the book below to be added to the event's registration list. Donations will go to BLM DC. There will also be an option to snag the book during the event.

"Keenan Norris is simply one of the most talented young writers around." - Victor LaValle

Copeland Cane V, the child who fell outta Colored People Time and into America, is a fugitive...

He is also just a regular teenager coming up in a terrifying world. A slightly eccentric, flip-phone loving kid with analog tendencies and a sideline hustling sneakers, the boundaries of Copeland's life are demarcated from the jump by urban toxicity, an educational apparatus with confounding intentions, and a police state that has merged with media conglomerates--the highly-rated Insurgency Alert Desk that surveils and harasses his neighborhood in the name of anti-terrorism.

Recruited by the nearby private school even as he and his folks face eviction, Copeland is doing his damnedest to do right by himself, for himself. And yet the forces at play entrap him in a reality that chews up his past and obscures his future. Copeland's wry awareness of the absurd keeps life passable, as do his friends and their surprising array of survival skills. And yet in the aftermath of a protest rally against police violence, everything changes, and Copeland finds himself caught in the flood of history.

Set in East Oakland, California in a very near future, The Confession of Copeland Cane introduces us to a prescient and contemporary voice, one whose take on coming of age in America becomes a startling reflection of our present moment.

Keenan Norris is a novelist, essayist and short story writer, the author of the forthcoming novel The Confession of Copeland Cane set in Oakland, California, circa 2030. His debut novel Brother and the Dancer won the James D. Houston Award and his chapbook By the Lemon Tree was nominated for a California Book Award. Keenan’s short work has appeared in numerous forums, including the Los Angeles Review of Books, Los Angeles Times, Alta, popmatters.com, Visible Magazine, BOOM: A Journal of California and several anthologies of California literature. He holds an M.F.A. from Mills College and a Ph.D. from the University of California, Riverside and he’s been a 2017 Marin Headlands Artist-in-Residence, as well as a Public Voices fellow (2020), a Callaloo fellow (2016) and a Yerba Buena Center for the Arts fellow(2017, 2015). He teaches American Literature and Creative Writing at San José State University and serves as a guest editor for the Oxford African-American Studies Center. Learn more at keenannorris.com.

Victor LaValle is the author of the short story collection Slapboxing with Jesus, four novels, The Ecstatic, Big Machine, The Devil in Silver, and The Changeling and two novellas, Lucretia and the Kroons and The Ballad of Black Tom. He is also the creator and writer of two comic books Victor LaValle's DESTROYER and EVE.He has been the recipient of numerous awards including the World Fantasy Award, British Fantasy Award, Bram Stoker Award, Whiting Writers' Award, a Guggenheim Fellowship, Shirley Jackson Award, American Book Award, and the key to Southeast Queens. He was raised in Queens, New York. He now lives in Washington Heights with his wife and kids. He teaches at Columbia University.

The Confession of Copeland Cane (Hardcover)

The Changeling: A Novel (Paperback)

The Ballad of Black Tom (Paperback)