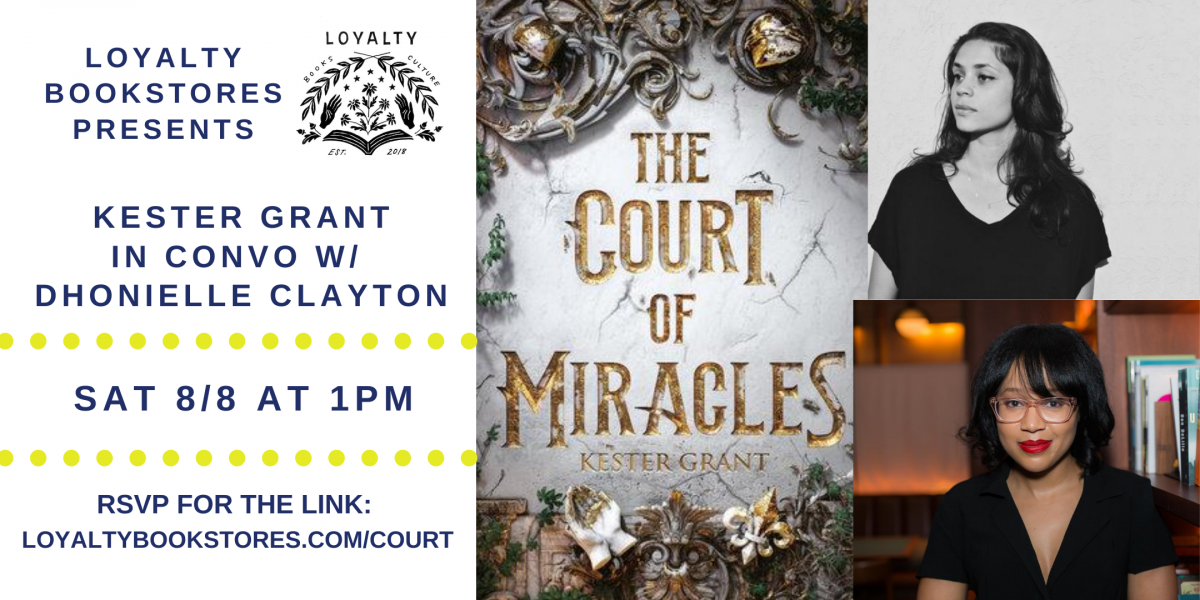 Join us for a chat with two phenomenal authors, Kester Grant and Dhonielle Clayton, in celebration of the recent release of The Court of Miracles! This event will be held digitally via crowdcast. This virtual event is free to RSVP, with options to purchase a copy of The Court of Miracles, The Belles, or both! Click on the button below to RVSP!

Les Misérables meets Six of Crows in this page-turning adventure as a young thief finds herself going head to head with leaders of Paris's criminal underground in the wake of the French Revolution.

In an alternate 1828 Paris, the French Revolution has failed and the city is divided between merciless royalty and nine underworld criminal guilds, known as the Court of Miracles. Eponine (Nina) Thénardier is a talented cat burglar and member of the Thieves Guild. Nina's life is midnight robberies, avoiding her father's fists, and watching over her naïve adopted sister, Cosette (Ettie). When Ettie attracts the eye of the Tiger--the ruthless lord of the Guild of Flesh--Nina is caught in a desperate race to keep the younger girl safe. Her vow takes her from the city's dark underbelly to the glittering court of Louis XVII. And it also forces Nina to make a terrible choice--protect Ettie and set off a brutal war between the guilds, or forever lose her sister to the Tiger.

Kester Grant is a British-Mauritian writer of color. She was born in London, grew up between the UK, Democratic Republic of Congo, and the tropical island paradise of Mauritius.  As a wanton nomad she and her husband are unsure which country they currently reside in but they can generally be found surrounded by their fiendish pack of cats and dogs. You can check out her website at www.kestergrant.com.

Dhonielle Clayton hails from the Washington, D.C. suburbs on the Maryland side, but now lives in New York City. She has earned an MA in Children’s Literature from Hollins University and an MFA Writing for Children at the New School. She taught secondary school for several years – at a pre-professional ballet academy and a private K-8 school. She spent most of her twenties in and out of America – living in London, Paris, a small Japanese town, Bermuda – and wandering the planet. She’s been on five out of seven continents, and has grand plans to reach all of them. She is a former elementary and middle school librarian, and co-founder of CAKE Literary, a creative kitchen whipping up decadent – and decidedly diverse – literary confections for middle grade, young adult, and women’s fiction readers. She is also COO of the non-profit We Need Diverse Books. Dhonielle is the author of New York Times bestseller The Belles and coauthor of the Tiny Pretty Things series. You can find her online at www.dhonielleclayton.com or follow her @brownbookworm.

The Court of Miracles (Hardcover)