Morowa Yejidé and Jeffery Renard Allen for CREATURES OF PASSAGE 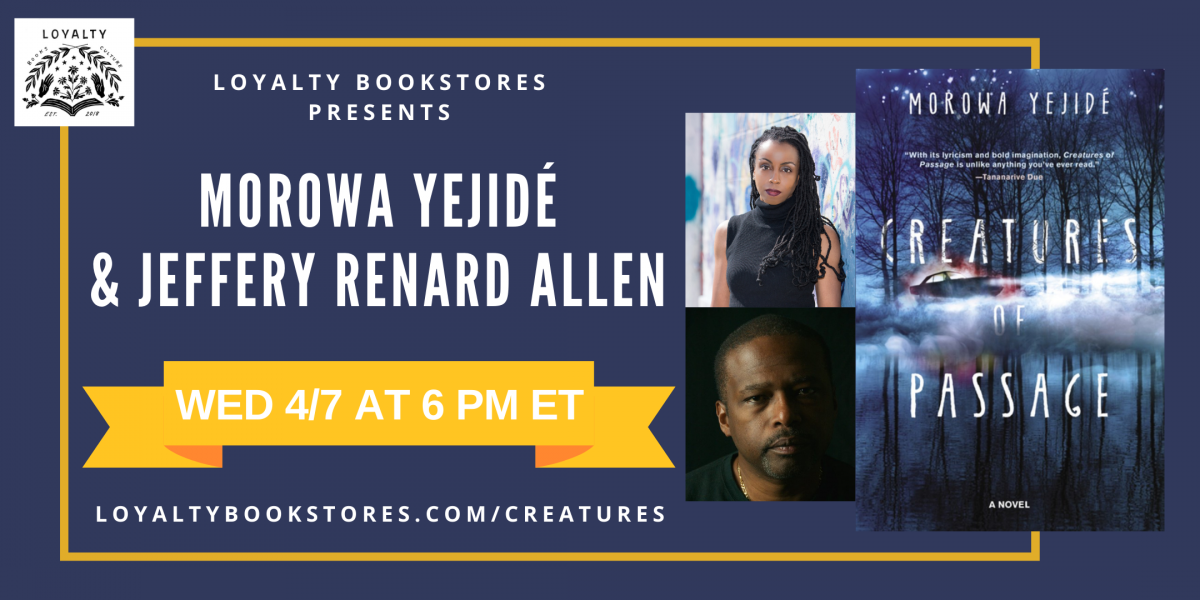 Loyalty is so excited to welcome Morowa Yejidé and Jeffery Renard Allen in conversation for the release of Creatures of Passage! This event will be held digitally via Crowdcast. Click here to register for the event with a donation of any amount of your choice or you can order a copy of Creatures of Passage below to be added to the event's registration list. Donations will go to Black Lives Matter DC. There will also be an option to snag the book during the event.

"In its luminous prose, and its nods to mysticism and myth, the novel brings to mind the best of Toni Morrison. It's that good."
--Washington Post, One of the Best Books about Washington, DC, recommended by George Pelecanos

Morowa Yejidé, a native of Washington, DC, is the author of the critically acclaimed novel Time of the Locust, which was a 2012 finalist for the PEN/Bellwether Prize, long-listed for the 2015 PEN/Bingham Prize, and a 2015 NAACP Image Award nominee. She lives in the DC area with her husband and three sons. Creatures of Passage is her second novel.

Jeffery Renard Allen is the author of five books including the novels Song of the Shank and Rails Under My Back, which won the Chicago Tribune‘s Heartland Prize for Fiction; the short story collection Holding Pattern, which received The Ernest J. Gaines Award for Literary Excellence; and two collections of poetry. Allen is the recipient of a Whiting Writers’ Award, a grant in Innovative Literature from the Creative Capital Foundation, and a Guggenheim Fellowship.

Time of the Locust (Paperback)

Song of the Shank: A Novel (Paperback)

Rails Under My Back: A Novel (Paperback)