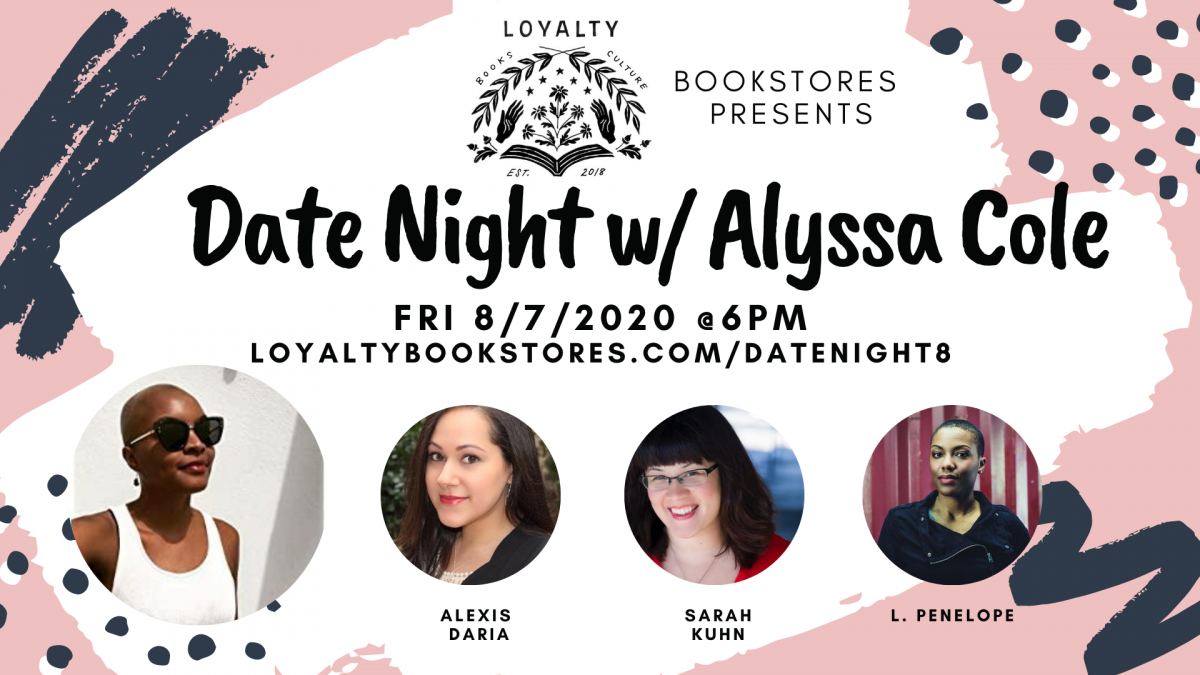 The Loyalty storefronts might be closed, but our love for Romancelandia never shuts down. Our new digital series with host Alyssa Cole and a diverse group of Romance writers every other Friday! You can simply RSVP for the link to the event or RSVP and purchase a coupon to use towards the purchase of books at Loyalty.

Our eighth evening is a date with the incredible romance authors ALEXIS DARIA, SARAH KUHN and L. PENELOPE. We'll chat about writing during Covid-19, our favorite tropes, the TV getting us through, and whatever else comes to mind during this free flowing chat with host Alyssa Cole.

Alyssa Cole is an award-winning author of historical, contemporary, and sci-fi romance. Her contemporary rom-com A Princess in Theory was one of the New York Times' 100 Notable Books of 2018, and her books have received critical acclaim from Library Journal, BuzzFeed, Kirkus, Booklist, Jezebel, Vulture, Book Riot, Entertainment Weekly, and various other outlets. When she's not working, she can usually be found watching anime or wrangling her many pets.

Alexis Daria is a native New Yorker and award-winning author writing stories about successful Latinx characters and their (occasionally messy) familias. Her debut Take the Lead won the 2018 RITA® Award for “Best First Book” and was one of the “Best Romance Novels of 2017” in The Washington Post and Entertainment Weekly. Her super powers include spotting celebrities in NYC, winning Broadway ticket lotteries, and live-tweeting.

Sarah Kuhn is the author of the popular Heroine Complex novels—a series starring Asian American superheroines. The first book is a Locus bestseller, an RT Reviewers’ Choice Award nominee, and one of the Barnes & Noble Sci-Fi & Fantasy Blog’s Best Books of 2016. Her YA debut, the Japan-set romantic comedy I Love You So Mochi, is a Junior Library Guild selection and a nominee for YALSA’s Best Fiction for Young Adults. She has also penned a variety of short fiction and comics, and her hotly anticipated graphic novel Shadow of the Batgirl is coming out in early 2020 from DC Comics. Additionally, she was a finalist for both the CAPE (Coalition of Asian Pacifics in Entertainment) New Writers Award and the Astounding Award for Best New Writer. A third generation Japanese American, she lives in Los Angeles with her husband and an overflowing closet of vintage treasures.

Leslye Penelope has been writing since she could hold a pen and loves getting lost in the worlds in her head. She is an award-winning author of fantasy and paranormal romance. She was born in the Bronx, just after the birth of hip hop, but left before she could acquire an accent. Equally left and right-brained, she studied Film at Howard University and minored in Computer Science. This led to a graduate degree in Multimedia and a career in website development. She’s also an award-winning independent filmmaker, co-founded a literary magazine, and sometimes dreams in HTML. Leslye lives in Maryland with her husband and their furry dependents.

You Had Me at Hola: A Novel (Paperback)

I Love You So Mochi (Point Paperbacks) (Paperback)