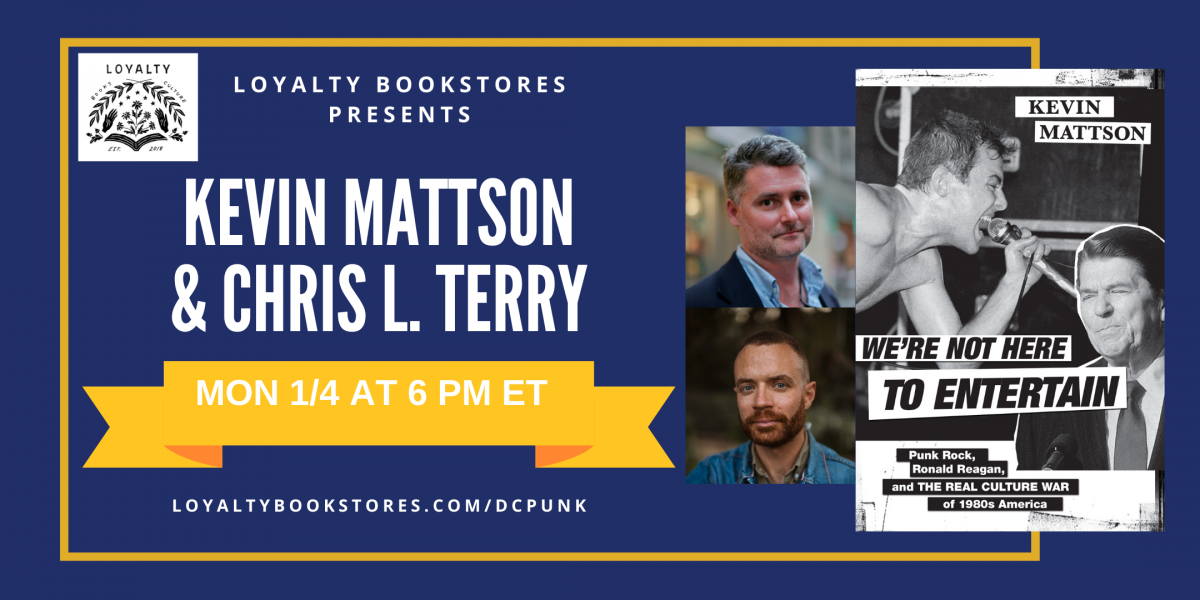 Join us for our first event of 2021! Kevin Mattson and Chris L. Terry will be in conversation for We're Not Here To Entertain: Punk Rock, Ronald Reagan, and the Real Culture War of 1980s America.  We're super pysched for this conversation! This event will be held digitally via Crowdcast. Click here to register for the event with a donation of any amount of your choice. Donations will go to Black Lives Matter DC. You can order the book below and there will also be an option to buy the book during the event.

Many remember the 1980s as the era of Ronald Reagan, a conservative decade populated by preppies and yuppies dancing to a soundtrack of electronic synth pop music. In some ways, it was the "MTV generation." However, the decade also produced some of the most creative works of punk culture, from the music of bands like the Minutemen and the Dead Kennedys to avant-garde visual arts, literature, poetry, and film. In We're Not Here to Entertain, Kevin Mattson documents what Kurt Cobain once called a "punk rock world" --the all-encompassing hardcore-indie culture that incubated his own talent. Mattson shows just how widespread the movement became--ranging across the nation, from D.C. through Ohio and Minnesota to LA--and how democratic it was due to its commitment to Do-It-Yourself (DIY) tactics.

Throughout, Mattson puts the movement into a wider context, locating it in a culture war that pitted a blossoming punk scene against the new president. Reagan's talk about end days and nuclear warfare generated panic; his tax cuts for the rich and simultaneous slashing of school lunch program funding made punks, who saw themselves as underdogs, seethe at his meanness. The anger went deep, since punks saw Reagan as the country's entertainer-in-chief; his career, from radio to Hollywood and television, synched to the very world punks rejected. Through deep archival research, Mattson reignites the heated debates that punk's opposition generated in that era-about everything from "straight edge" ethics to anarchism to the art of dissent. By reconstructing the world of punk, Mattson demonstrates that it was more than just a style of purple hair and torn jeans. In so doing, he reminds readers of punk's importance and its challenge to simplistic assumptions about the 1980s as a one-dimensional, conservative epoch.

Kevin Mattson grew up in the suburban sprawl known as the Washington, D.C. Metropolitan Area. It was here that he first experienced the "punk rock world" that fuelled his formative years. He played in bands, wrote for zines, and became politically active, helping to cofound the organization Positive Force. He now teaches American history at Ohio University and is the author of numerous books that explore the intersection between culture and politics, including Upton Sinclair and the Other American Century and What the Heck Are You Up To, Mr. President?

CHRIS L. TERRY was born in 1979 to an African American father and an Irish American mother. He has an BA in English from Virginia Commonwealth University and a creative writing MFA from Columbia College Chicago. Terry’s debut novel, Zero Fade, was named a Best Book of the Year by Slate and Kirkus Reviews. Terry lives in Los Angeles with his family.