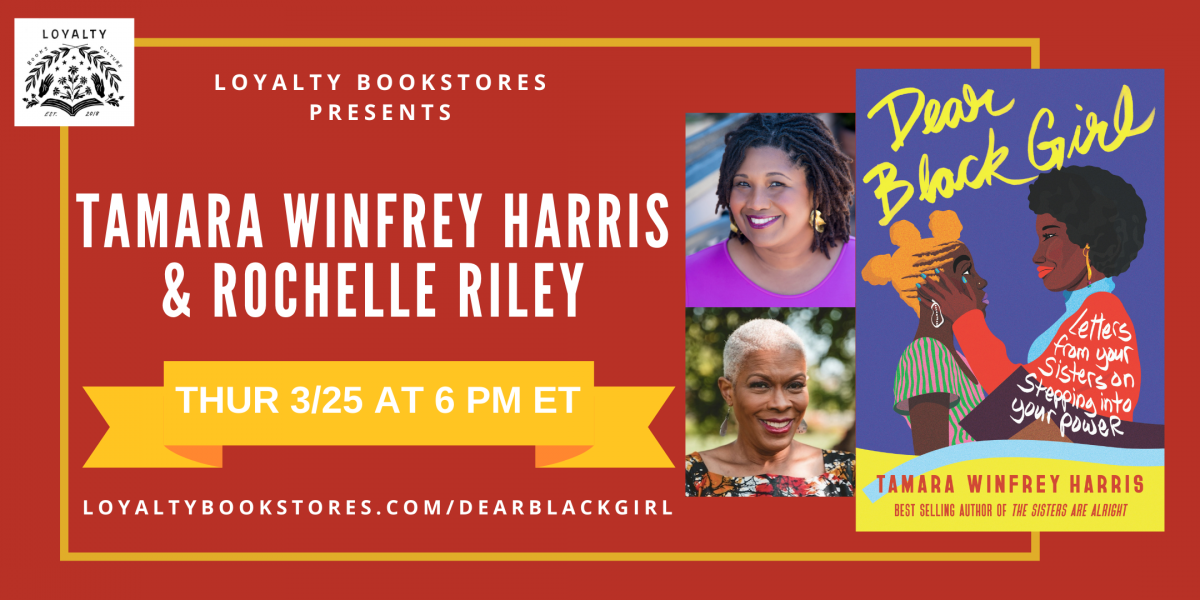 Loyalty is so excited to welcome Tamara Winfrey Harris in conversation with Rochelle Riley for the release of Dear Black Girl: Letter From Your Sisters On Stepping Into Your Power! This event will be held digitally via Crowdcast. Click here to register for the event with a donation of any amount of your choice. Donations will go to Black Lives Matter DC. You can order the book on our website to be automatically registered for the event, and there will also be an option to get the book during the event.

"Dear Black Girl is the empowering, affirming love letter our girls need in order to thrive in a world that does not always protect, nurture, or celebrate us. This collection of Black women's voices... is a must-read, not only for Black girls, but for everyone who cares about Black girls, and for Black women whose inner-Black girl could use some healing." - Tarana Burke, Founder of the 'Me Too' Movement

"Dear Dope Black Girl, You don't know me, but I know you. I know you because I am you! We are magic, light, and stars in the universe." So begins a letter that Tamara Winfrey Harris received as part of her Letters to Black Girls project, where she asked black women to write honest, open, and inspiring letters of support to young black girls aged thirteen to twenty-one. Her call went viral, resulting in a hundred personal letters from black women around the globe that cover topics such as identity, self-love, parents, violence, grief, mental health, sex, and sexuality.

In Dear Black Girl, Winfrey Harris organizes a selection of these letters, providing "a balm for the wounds of anti-black-girlness" and modeling how black women can nurture future generations. Each chapter ends with a prompt encouraging girls to write a letter to themselves, teaching the art of self-love and self-nurturing. Winfrey Harris's The Sisters Are Alright explores how black women must often fight and stumble their way into alrightness after adulthood. Dear Black Girl continues this work by delivering pro-black, feminist, LGBTQ+ positive, and body positive messages for black women-to-be--and for the girl who still lives inside every black woman who still needs reminding sometimes that she is alright.

Tamara Winfrey Harris is the author of The Sisters Are Alright, which won several awards, including the Harlem Book Fair's Phillis Wheatley Award. Her work also appears in the books The Burden: African Americans and the Enduring Impact of Slavery and The Lemonade Reader: Beyoncé, Black Feminism and Spirituality, as well as in publications such as the New York Times, Cosmopolitan, New York Magazine, Ebony, the American Prospect, and Ms. magazine. She is also vice president of community leadership and effective philanthropy at the Central Indiana Community Foundation.

Rochelle Riley is Director of Arts and Culture for the city of Detroit. The author, essayist, and arts advocate ended a nearly twenty-year stint in 2019 as a columnist for the Detroit Free Press, where she was an award-winning voice for children and advocate for improved education, government, and race relations. She is editor of The Burden: African Americans and the Enduring Impact of Slavery (Wayne State University Press, 2018). She calls herself "a writer by trade, warrior by necessity."

Dear Black Girl: Letters From Your Sisters on Stepping Into Your Power (Paperback)

The Sisters Are Alright: Changing the Broken Narrative of Black Women in America (Paperback)

That They Lived: African Americans Who Changed the World (Painted Turtle) (Paperback)