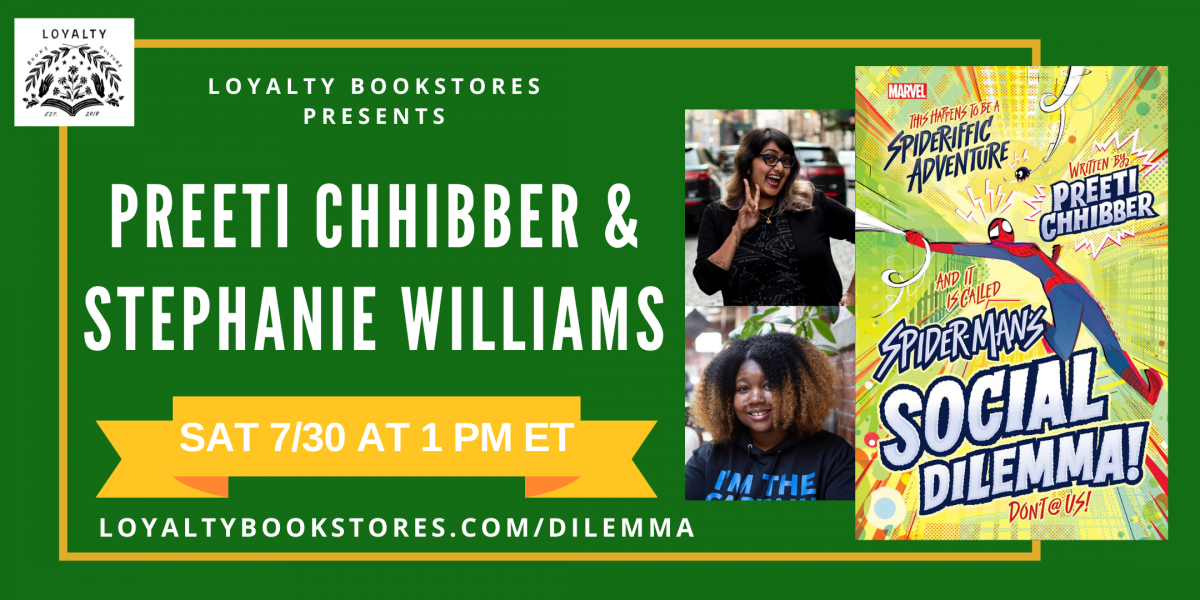 Loyalty is thrilled to host Preeti Chhibber and Stephanie Williams for an event celebrating Spider-Man's Social Dilemma! This event is free to attend and will be held digitally via Crowdcast. Click here to register for the event. You can also order a copy of the book below to be automatically added to the registration list, and there will be an option to snag the book during the event.

The first in a three-book middle grade novel series by Spider-Man's number one fan and hilarious fiction writer, Preeti Chhibber!

On top of all that, the notorious villain the Sandman is acting more strangely than ever, social media seems to be taking a toll on MJ, and someone keeps trying to steal an artifact that’s supposedly powered by alien matter . . . which can’t be good. Something eerie is going on, and Peter is determined to figure out what it is before things go from weird to dangerous.

Preeti Chhibber is an author, speaker, and freelancer. She's written for SYFY, Polygon, and Elle, among others. In 2022, she made her Marvel comics debut in WOMEN OF MARVEL #1 with a brand-new Black Cat story. This year will also see the release of Spider-Man’s Social Dilemma, the first in an original upper-middle grade Peter Parker trilogy from Marvel Press. Find her co-hosting the podcasts Desi Geek Girls and Tar Valon or Bust. She’s appeared on panels at NYCC, SDCC, and on screen on SYFY. You probably recognize her from one of several BuzzFeed “look at these tweets” lists. PreetiChhibber.com

Nicoletta Baldari is a cartoonist and character designer who works with Disney, DC Comics, Hasbro, Konami, Dark Horse, IDW, and Lucasfilm drawing cool princesses, Jedis, and everything you can imagine. But if eating french fries was a job, she'd apply for that instead. Her home is the west wing of Wayne Manor (which everybody knows is on the south side of Rome) with her husband and two sweet kittens that are always playing with her hair.

Stephanie Williams is a comic book historian and pop culture critic for notable publications such as SYFYFANGRRLS, Marvel, The A.V. Club, Nerdist, Den of Geek, and Rotten Tomatoes. Stephanie is also a comic creator with three ongoing webcomics, Parenthood Activate!, But What If Though?, and Living Heroes. She made her Marvel debut with a short story featuring Monica Rambeau in Marvel’s Voices: Legacy. She recently made her DC Comics debut in Wonder Woman Black and Gold #2 and is co-writing the Nubia and the Amazons miniseries.

Nubia: Queen of the Amazons (Hardcover)