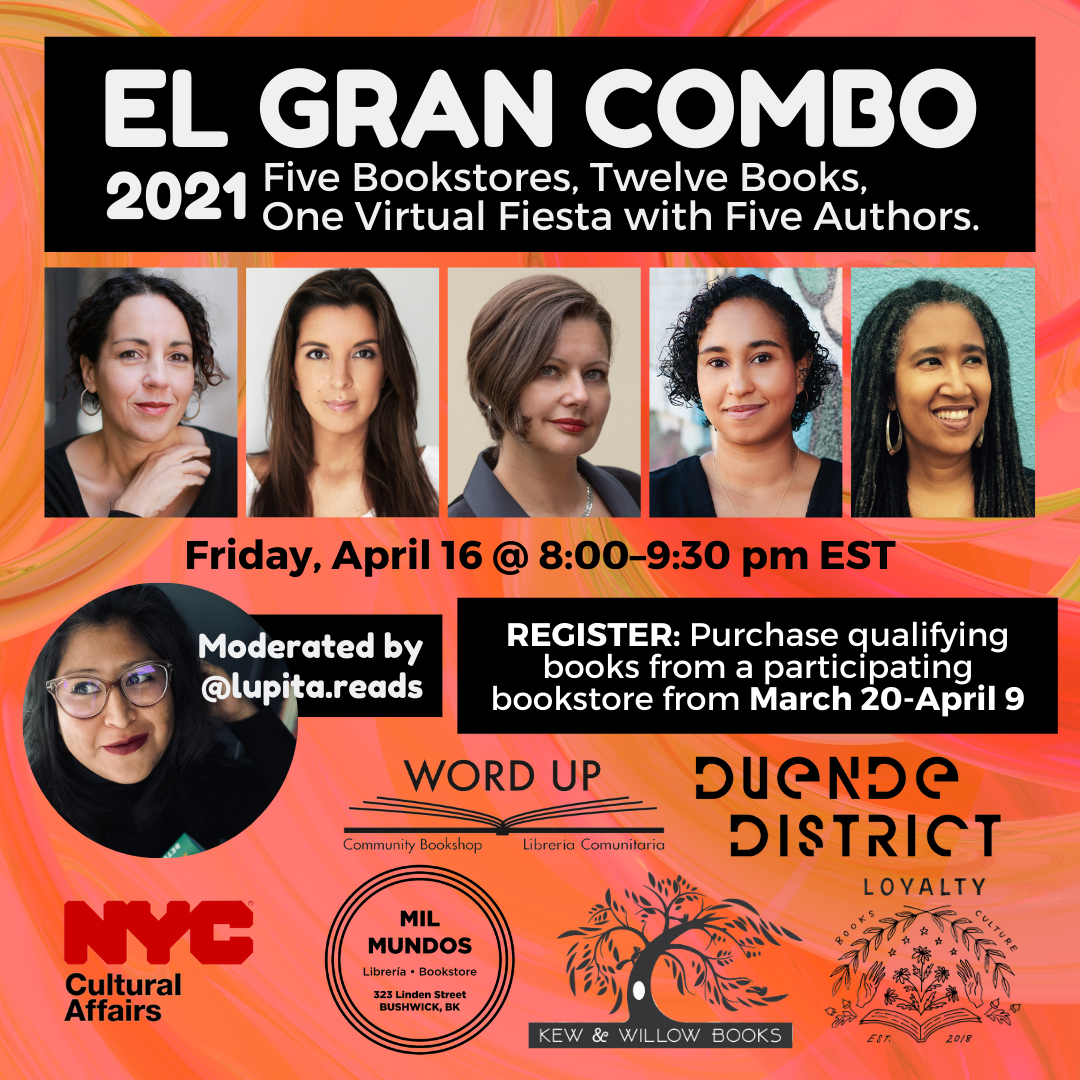 One Year Later: Five Authors, Five Bookstores, One Virtual Fiesta: Don't know what to read next while social distancing? Join EL GRAN COMBO by buying ONLINE one or more of the twelve books below between now and April 9, 2021, at one of our favorite community bookstores: Word Up Community Bookshop, Mil Mundos Books, Loyalty Bookstores, Duende District, and Kew & Willow Books.

Snag one of the books below to get an invite on April 14, 2021, to a private virtual event on Friday, April 16, 2021, 8:00–9:30pm EST via Zoom. Conversation and Q&A will be moderated by the one and only @lupita.reads with Angie Cruz, Carolina De Robertis, Naima Coster, Patricia Engel, and Aya de Leon.

The President and the Frog by Carolina De Robertis (August 3rd, 2021)

What's Mine and Yours by Naima Coster

A Spy In The Struggle by Aya De Leon

My Broken Language: A Memoir by Quiara Alegría Hudes - April 2021

The Kissing Bug: A True Story of a Family, an Insect, and a Nation's Neglect of a Deadly Disease by Daisy Hernández (June 1, 2021)

Once I Was You: A Memoir of Love and Hate in a Torn America & Una vez fui tú: Mi vida entre el amor y el odio en los Estados Unidos by Maria Hinojosa

A writer of Uruguayan origins, Carolina De Robertis is the author of five novels, including The President and the Frog, forthcoming in August 2021, Cantoras, and The Gods of Tango. Her books have received two Stonewall Book Awards, a Reading Women Award, Italy's Rhegium Julii Prize, and numerous other honors, and they have been translated into seventeen languages. De Robertis is also an award-winning translator of Latin American literature, and editor of the anthology Radical Hope: Letters of Love and Dissent in Dangerous Times. In 2017, the Yerba Buena Center for the Arts named De Robertis on its 100 List of “people, organizations, and movements that are shaping the future of culture.” She teaches at San Francisco State University, and lives in Oakland, California, with her wife and two children.

Angie Cruz is a novelist and editor. Her novel, Dominicana is the inaugural book pick for GMA book club and chosen as the 2019/2020 Wordup Uptown Reads. It was shortlisted for The Women’s Prize, longlisted for the Andrew Carnegie Medals for Excellence in Fiction, The Aspen Words Literary Prize, a RUSA Notable book and the winner of the ALA/YALSA Alex Award in fiction. Her first novel, Soledad (2001) and second novel, Let It Rain Coffee (2005) were both published by Simon & Schuster. She has published short fiction and essays in magazines and journals, including The New York Times, VQR, and Gulf Coast Literary Journal. She is founder and Editor-in-Chief of Aster(ix), a literary and arts journal, and is an Associate Professor of English at the University of Pittsburgh.

Naima Coster is the author of two novels, What's Mine and Yours, a Read with Jenna Book Club pick, and her debut, Halsey Street, which was a finalist for the 2018 Kirkus Prize for Fiction. In 2020, she received the National Book Foundation's "5 Under 35" honor. Naima's stories and essays have appeared in the New York Times, Kweli, The Paris Review Daily, The Cut, Catapult, The Rumpus, and elsewhere. She has taught writing for over a decade in community settings, youth programs, and universities. She lives in Brooklyn with her family.

Patricia Engel is the author of Infinite Country, a Reese’s Book Club pick, Esquire Book Club and Indie Next pick, and more. Her other books include The Veins of the Ocean, which won the Dayton Literary Peace Prize and was named a New York Times Editors’ Choice and a San Francisco Chronicle Best Book of the Year; It’s Not Love, It’s Just Paris, which won the International Latino Book Award, and of Vida, a finalist for the PEN/Hemingway Fiction Award and the Young Lions Fiction Award, and a New York Times Notable Book of the Year. For Vida, Patricia was the first woman to be awarded Colombia’s national prize in literature, the Premio Biblioteca de Narrativa Colombiana. She has been awarded fellowships from the Guggenheim Foundation, the National Endowment for the Arts, and is the recipient of an O. Henry Award. Her short fiction has appeared in The Best American Short Stories, The Best American Mystery Stories, The O. Henry Prize Stories, and elsewhere. She teaches at the University of Miami.

Aya de León teaches creative writing at UC Berkeley. Kensington Books publishes her award-winning feminist heist series, which includes Side Chick Nation, about Hurricane Maria in Puerto Rico. Recently, Kensington published her first standalone novel, A Spy in the Struggle, about FBI infiltration of an African American organization in the Bay Area fighting for climate justice and Black Lives. Her work has appeared in Harper’s Bazaar, Ebony, Guernica, and on Def Poetry. In 2022, Candlewick will publish Aya’s first young adult novel in a spy girl series, called Undercover Latina. Her next adult book is Queen of Urban Prophecy—a novel that addresses misogyny in hip hop, police violence, and climate justice—out in August.

Lupita Aquino--better known as Lupita Reads -- is a columnist for the Washington Independent Review of Books, and book curator for BESE media. She is a passionate reader amplifying and highlighting books written by authors of color through her Instagram blog.

This program is supported, in part, by public funds from the New York City Department of Cultural Affairs in partnership with the City Council.

The President and the Frog: A novel (Hardcover)

What's Mine and Yours (Hardcover)

A Spy in the Struggle: A Riveting Must-Read Novel of Suspense (Paperback)

My Broken Language: A Memoir (Hardcover)

The Kissing Bug: A True Story of a Family, an Insect, and a Nation's Neglect of a Deadly Disease (Hardcover)

Once I Was You: A Memoir of Love and Hate in a Torn America (Hardcover)

Once I Was You: A Memoir (Paperback)