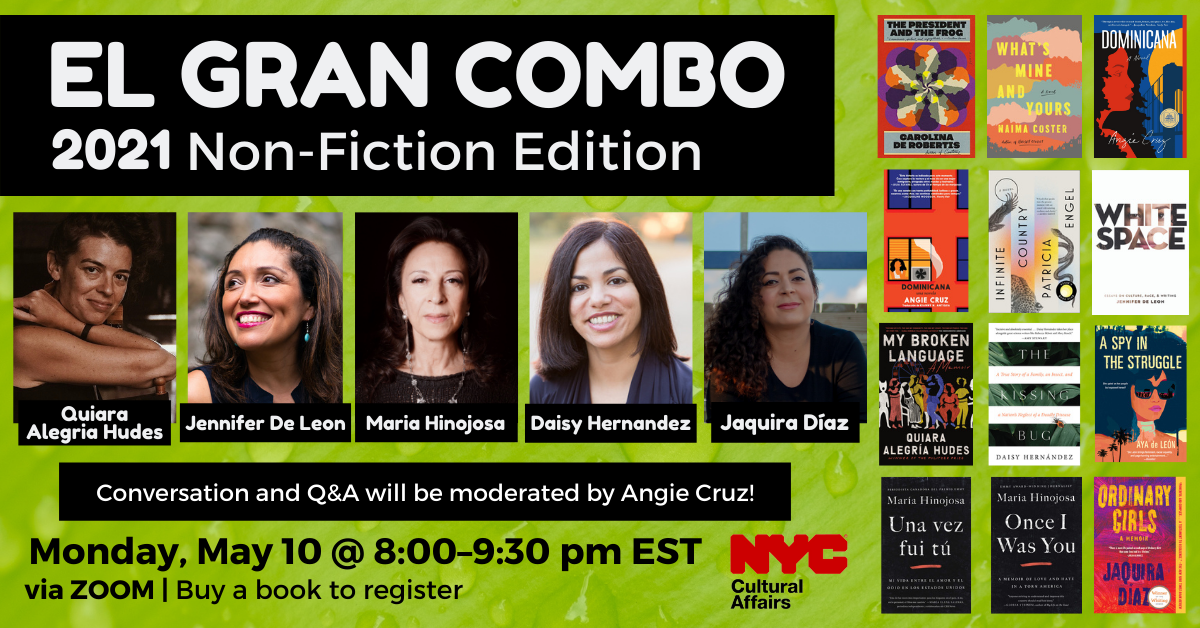 We're bringing back El Gran Combo for a non-fiction edition with all new authors for another virtual fiesta! Join us in a conversation with authors Jaquira Díaz, Jennifer De Leon, Daisy Hernandez, Quiara Alegria Hudes, and Maria Hinojosa, with moderation by Angie Cruz.

If you bought a participating book for EL GRAN COMBO on April 16th, then you will be automatically invited. If you didn’t, you can be invited by buying ONLINE one or more of the twelve books below between March 20 and May 5, 2021, at Loyalty Bookstores or at one of our favorite community bookstores: Word Up Community Bookshop, Mil Mundos Books, Duende District, and Kew & Willow Books.

The President and the Frog by Carolina De Robertis (August 3rd, 2021)

What's Mine and Yours by Naima Coster

A Spy In The Struggle by Aya De Leon

My Broken Language: A Memoir by Quiara Alegría Hudes - April 2021

The Kissing Bug: A True Story of a Family, an Insect, and a Nation's Neglect of a Deadly Disease by Daisy Hernández (June 1, 2021)

Once I Was You: A Memoir of Love and Hate in a Torn America & Una vez fui tú: Mi vida entre el amor y el odio en los Estados Unidos by Maria Hinojosa

Maria Hinojosa dreamt of a space where she could create independent, multimedia journalism that explores and gives a critical voice to the diverse American experience. She made that dream a reality in 2010 when she created Futuro Media, an independent, nonprofit newsroom based in Harlem, NYC with the mission to create multimedia content from a POC perspective. As Anchor and Executive Producer of the Peabody Award-winning show Latino USA, distributed by PRX, and Co-Host of Futuro Media’s award-winning political podcast In The Thick, Hinojosa has informed millions about the changing cultural and political landscape in America and abroad.

Jaquira Díaz was born in Puerto Rico and raised in Miami. She is the author of Ordinary Girls: A Memoir, winner of a Whiting Award, a Florida Book Awards Gold Medal, and a Lambda Literary Awards finalist. Ordinary Girls was an Indies Introduce Selection, a Barnes & Noble Discover Great New Writers Notable Selection, an Indie Next Pick, and a Library Reads selection. Díaz's work has been published in The Guardian, Time Magazine, T: The New York Times Style Magazine, The Best American Essays, and is forthcoming in The Atlantic. She is the recipient of two Pushcart Prizes, an Elizabeth George Foundation grant, and fellowships from the MacDowell Colony, the Kenyon Review, and the Wisconsin Institute for Creative Writing. A former Visiting Assistant Professor at the University of Wisconsin-Madison’s MFA Program in Creative Writing, and Consulting Editor at the Kenyon Review, she splits her time between Montréal, Miami Beach, and the UK with her spouse, the writer Lars Horn.

Jennifer De Leon is author of the YA novel Don’t Ask Me Where I’m From (Simon & Schuster), editor of the anthology Wise Latinas: Writers on Higher Education (University of Nebraska Press), and most recently, the essay collection White Space: Essays on Culture, Race, & Writing (UMass Press) which won the Juniper Prize. She is Assistant Professor of Creative Writing at Framingham State University and faculty member in the MFA in Creative Nonfiction program at Bay Path University. Connect with her @jdeleonwriter on Instagram and Twitter or at her website: www.jenniferdeleonauthor.com

Quiara Alegría Hudes is the Pulitzer Prize–winning playwright of Water by the Spoonful and the author of a memoir, My Broken Language. She wrote the book for the Tony-winning Broadway musical In the Heights and later adapted it for the screen. Her notable essays include “High Tide of Heartbreak” in American Theatre magazine and “Corey Couldn’t Take It Anymore” in The Cut. As a prison reform activist, Hudes and her cousin founded Emancipated Stories, a platform where people behind bars can share one page of their life story with the world. She lives with her family in New York but frequently returns to her native Philly.

Angie Cruz is a novelist and editor. Her novel, Dominicana is the inaugural book pick for GMA book club and chosen as the 2019/2020 Wordup Uptown Reads. It was shortlisted for The Women’s Prize, longlisted for the Andrew Carnegie Medals for Excellence in Fiction, The Aspen Words Literary Prize, a RUSA Notable book and the winner of the ALA/YALSA Alex Award in fiction. Her first novel, Soledad (2001) and second novel, Let It Rain Coffee (2005) were both published by Simon & Schuster. She has published short fiction and essays in magazines and journals, including The New York Times, VQR, and Gulf Coast Literary Journal. She is founder and Editor-in-Chief of Aster(ix), a literary and arts journal, and is an Associate Professor of English at the University of Pittsburgh.