Patrick Radden Keefe and Jia Tolentino for EMPIRE OF PAIN 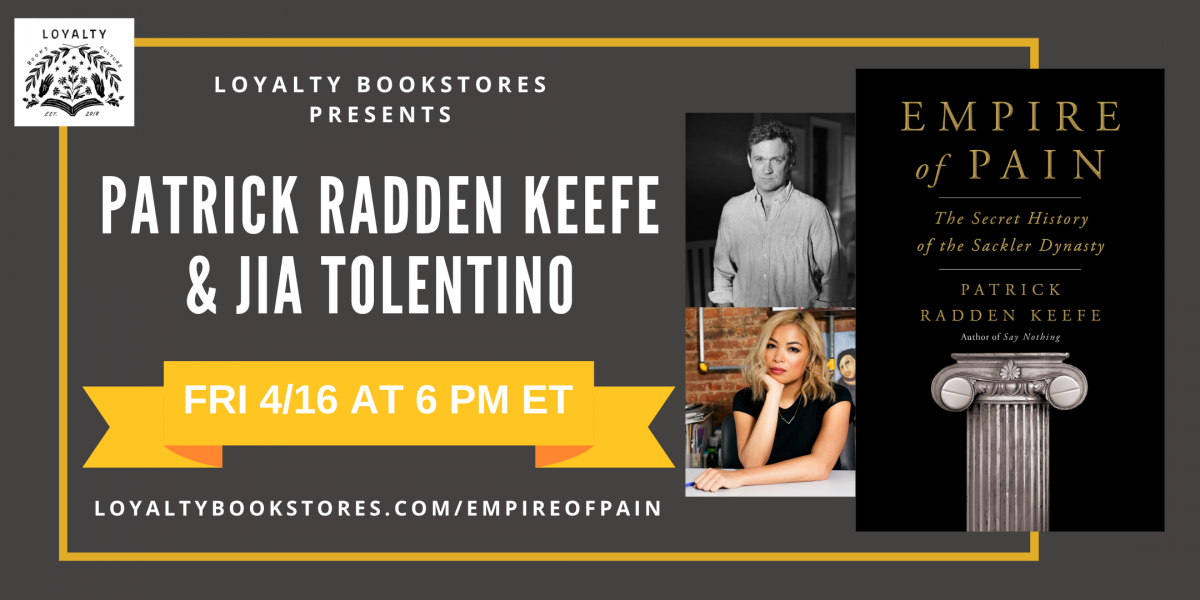 Loyalty is so excited to celebrate the release of Empire of Pain: The Secret History of the Sackler Dynasty with Patrick Radden Keefe and Jia Tolentino!! This event will be held digitally via Crowdcast. Click here to register for the event with a donation of any amount of your choice or you can order the book below to be added to the event's registration list. Donations will go to Black Lives Matter DC. There will also be an option to snag the book during the event. The first 100 purchases from our website will receive a signed bookplate with their order!

A grand, devastating portrait of three generations of the Sackler family, famed for their philanthropy, whose fortune was built by Valium and whose reputation was destroyed by OxyContin, by the prize-winning, bestselling author of Say Nothing

The Sackler name adorns the walls of many storied institutions—Harvard, the Metropolitan Museum of Art, Oxford, the Louvre. They are one of the richest families in the world, known for their lavish donations to the arts and the sciences. The source of the family fortune was vague, however, until it emerged that the Sacklers were responsible for making and marketing a blockbuster painkiller that was the catalyst for the opioid crisis.
Empire of Pain begins with the story of three doctor brothers, Raymond, Mortimer and the incalculably energetic Arthur, who weathered the poverty of the Great Depression and appalling anti-Semitism. Working at a barbaric mental institution, Arthur saw a better way and conducted groundbreaking research into drug treatments. He also had a genius for marketing, especially for pharmaceuticals, and bought a small ad firm.
Arthur devised the marketing for Valium, and built the first great Sackler fortune. He purchased a drug manufacturer, Purdue Frederick, which would be run by Raymond and Mortimer. The brothers began collecting art, and wives, and grand residences in exotic locales. Their children and grandchildren grew up in luxury.
Forty years later, Raymond’s son Richard ran the family-owned Purdue. The template Arthur Sackler created to sell Valium—co-opting doctors, influencing the FDA, downplaying the drug’s addictiveness—was employed to launch a far more potent product: OxyContin. The drug went on to generate some thirty-five billion dollars in revenue, and to launch a public health crisis in which hundreds of thousands would die.
This is the saga of three generations of a single family and the mark they would leave on the world, a tale that moves from the bustling streets of early twentieth-century Brooklyn to the seaside palaces of Greenwich, Connecticut, and Cap d’Antibes to the corridors of power in Washington, D.C.  Empire of Pain chronicles the multiple investigations of the Sacklers and their company, and the scorched-earth legal tactics that the family has used to evade accountability. The history of the Sackler dynasty is rife with drama—baroque personal lives; bitter disputes over estates; fistfights in boardrooms; glittering art collections; Machiavellian courtroom maneuvers; and the calculated use of money to burnish reputations and crush the less powerful.
Empire of Pain is a masterpiece of narrative reporting and writing, exhaustively documented and ferociously compelling. It is a portrait of the excesses of America’s second Gilded Age, a study of impunity among the super elite and a relentless investigation of the naked greed and indifference to human suffering that built one of the world’s great fortunes.

Patrick Radden Keefe is a staff writer at The New Yorker  and the author, most recently, of the New York Times bestseller Say Nothing: A True Story of Murder and Memory in Northern Ireland, which received the National Book Critics Circle Award for Nonfiction, was selected as one of the ten best books of 2019 by The New York Times Book Review, The Washington Post, the Chicago Tribune and The Wall Street Journal, and was named one of the “10 Best Nonfiction Books of the Decade” by Entertainment Weekly. His previous books are The Snakehead and Chatter. His work has been recognized with a Guggenheim Fellowship, the National Magazine Award for Feature Writing and the Orwell Prize for Political Writing. He is also the creator and host of the eight-part podcast Wind of Change.

Jia Tolentino is a staff writer at the New Yorker and the author of the essay collection Trick Mirror.

Empire of Pain: The Secret History of the Sackler Dynasty (Hardcover)

Say Nothing: A True Story of Murder and Memory in Northern Ireland (Paperback)