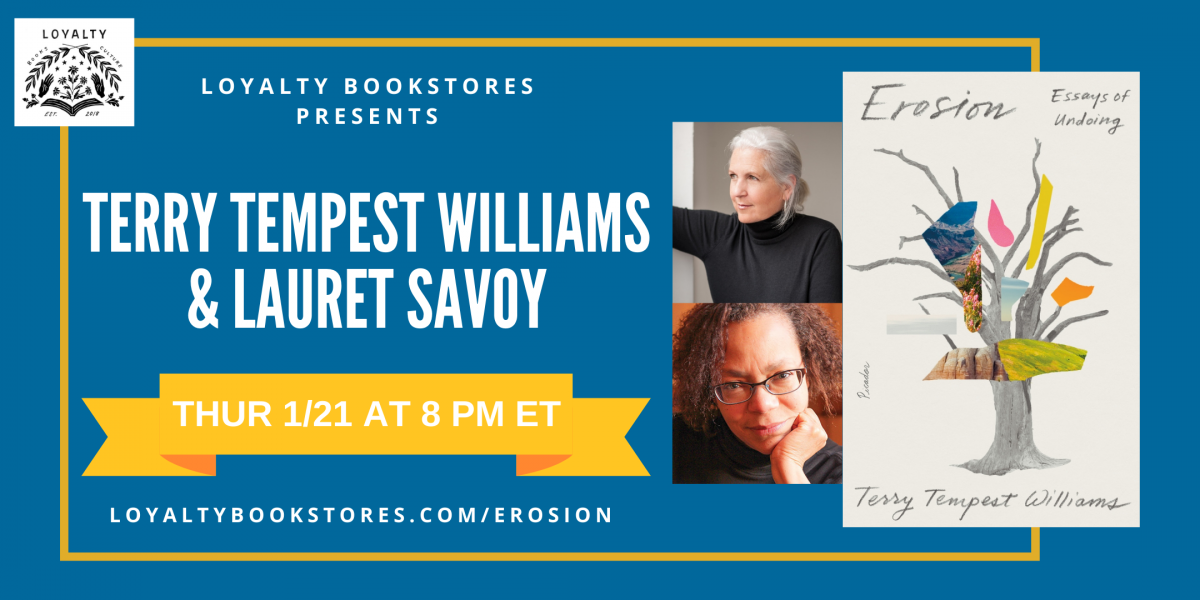 We're so excited to welcome Terry Tempest Williams and Lauret Savoy in conversation for Erosion! This event will be held digitally via Crowdcast. Click here to register for the event with a donation of any amount of your choice. Donations will go to Black Lives Matter DC. You can order the book below and there will also be an option to buy the book during the event.

Fierce, timely, and unsettling essays from an important and beloved writer and conservationist

Terry Tempest Williams's fierce, spirited, and magnificent essays are a howl in the desert. She sizes up the continuing assaults on America's public lands and the erosion of our commitment to the open space of democracy. She asks: "How do we find the strength to not look away from all that is breaking our hearts?"

We know the elements of erosion: wind, water, and time. They have shaped the spectacular physical landscape of our nation. Here, Williams bravely and brilliantly explores the many forms of erosion we face: of democracy, science, compassion, and trust. She examines the dire cultural and environmental implications of the gutting of Bear Ears National Monument—sacred lands to Native Peoples of the American Southwest; of the undermining of the Endangered Species Act; of the relentless press by the fossil fuel industry that has led to a panorama in which "oil rigs light up the horizon." And she testifies that the climate crisis is not an abstraction, offering as evidence the drought outside her door and, at times, within herself.

These essays are Williams's call to action, blazing a way forward through difficult and dispiriting times. We will find new territory—emotional, geographical, communal. The erosion of desert lands exposes the truth of change. What has been weathered, worn, and whittled away is as powerful as what remains. Our undoing is also our becoming.

Erosion is a book for this moment, political and spiritual at once, written by one of our greatest naturalists, essayists, and defenders of the environment. She reminds us that beauty is its own form of resistance, and that water can crack stone.

Terry Tempest Williams is the award-winning author of The Hour of Land: A Personal Topography of America’s National Parks; Refuge: An Unnatural History of Family and Place; Finding Beauty in a Broken World; and When Women Were Birds, among other books. Her work is widely taught and anthologized around the world. She and her husband Brooke Williams divide their time between Cambridge, Massachusetts and Castle Valley, Utah.

Tracing memory threads Lauret Edith Savoy’s life and work: unearthing what is buried, re-membering what is fragmented, shattered, eroded. A woman of African American, Euro-American, and Native American heritage, she writes about the stories we tell of the American land’s origins and the stories we tell of ourselves in this land. Her books include Trace: Memory, History, Race, and the American Landscape; The Colors of Nature: Culture, Identity and the Natural World; Bedrock: Writers on the Wonders of Geology; and Living with the Changing California Coast. Trace won the 2016 American Book Award from the Before Columbus Foundation and the 2017 ASLE Creative Writing Award. It was also a finalist for the 2016 PEN American Open Book Award and Phillis Wheatley Book Award, as well as shortlisted for the William Saroyan International Prize for Writing and Orion Book Award. Lauret is the David B. Truman Professor of Environmental Studies and Geology at Mount Holyoke College, a photographer, and pilot. Winner of Mount Holyoke’s Distinguished Teaching Award and an Andrew Carnegie Fellowship, she has also held fellowships from the Smithsonian Institution and Yale University. Lauret is a Fellow of the Geological Society of America.

The Hour of Land: A Personal Topography of America's National Parks (Paperback)

When Women Were Birds: Fifty-four Variations on Voice (Paperback)

The Colors of Nature: Culture, Identity, and the Natural World (Paperback)