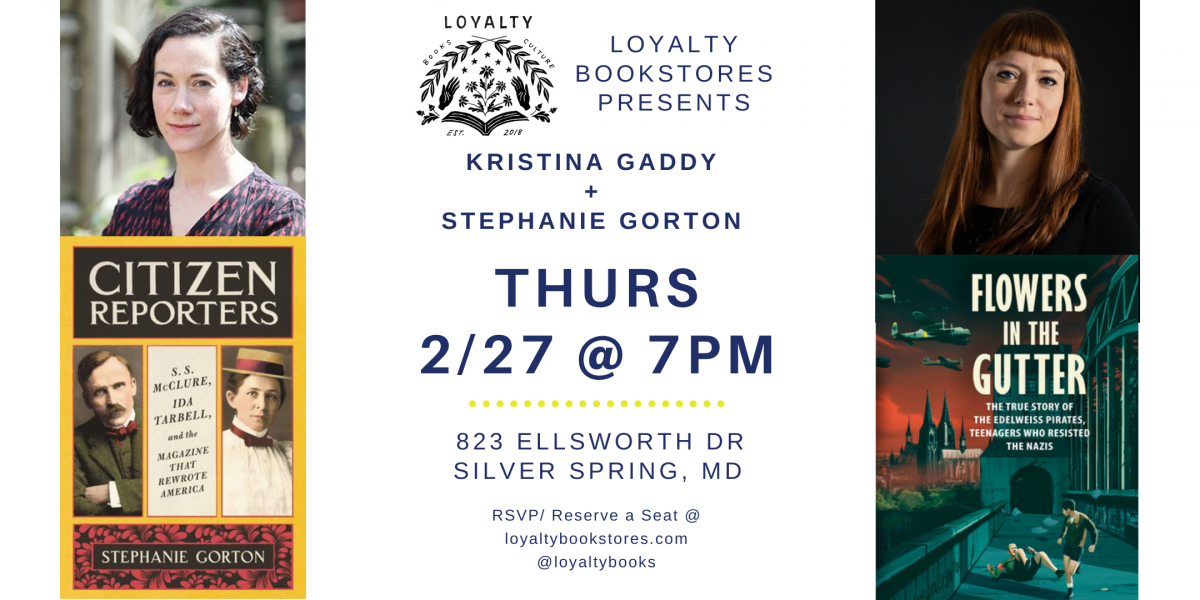 Join us for wine and great conversation with these two chroniclers of bad ass and unknown history at our Silver Spring store!

Citizen Reporters is the fascinating history of the rise and fall of influential Gilded Age magazine McClure's and the two unlikely outsiders at its helm--as well as a timely, full-throated defense of investigative journalism in America.The president of the United States made headlines around the world when he publicly attacked the press, denouncing reporters who threatened his reputation as "muckrakers" and "forces for evil." The year was 1906, the president was Theodore Roosevelt--and the publication that provoked his fury was McClure's magazine.

One of the most influential magazines in American history, McClure's drew over 400,000 readers and published the groundbreaking stories that defined the Gilded Age, including the investigation of Standard Oil that toppled the Rockefeller monopoly. Driving this revolutionary publication were two improbable newcomers united by single-minded ambition. S. S. McClure was an Irish immigrant, who, despite bouts of mania, overthrew his impoverished upbringing and bent the New York media world to his will. His steadying hand and star reporter was Ida Tarbell, a woman who defied gender expectations and became a notoriously fearless journalist.

The scrappy, bold McClure's group--Tarbell, McClure, and their reporters Ray Stannard Baker and Lincoln Steffens--cemented investigative journalism's crucial role in democracy. From reporting on labor unrest and lynching, to their exposés of municipal corruption, their reporting brought their readers face to face with a nation mired in dysfunction. They also introduced Americans to the voices of Willa Cather, Arthur Conan Doyle, Robert Louis Stevenson, Joseph Conrad, and many others.

Tracing McClure's from its meteoric rise to its spectacularly swift and dramatic combustion, Citizen Reporters is a thrillingly told, deeply researched biography of a powerhouse magazine that forever changed American life. It's also a timely case study that demonstrates the crucial importance of journalists who are unafraid to speak truth to power.

Flowers In the Gutter is the true story of the Edelweiss Pirates, working-class teenagers who fought the Nazis by whatever means they could.

Fritz, Gertrud, and Jean were classic outsiders: their clothes were different, their music was rebellious, and they weren't afraid to fight. But they were also Germans living under Hitler, and any nonconformity could get them arrested or worse. As children in 1933, they saw their world change. Their earliest memories were of the Nazi rise to power and of their parents fighting Brownshirts in the streets, being sent to prison, or just disappearing.

As Hitler's grip tightened, these three found themselves trapped in a nation whose government contradicted everything they believed in. And by the time they were teenagers, the Nazis expected them to be part of the war machine. Fritz, Gertrud, and Jean and hundreds like them said no. They grew bolder, painting anti-Nazi graffiti, distributing anti-war leaflets, and helping those persecuted by the Nazis. Their actions were always dangerous. The Gestapo pursued and arrested hundreds of Edelweiss Pirates. In World War II's desperate final year, some Pirates joined in sabotage and armed resistance, risking the Third Reich's ultimate punishment. This is their story.

Stephanie Gorton has written for NewYorker.com, Smithsonian.com, the Los Angeles Review of Books, The Toast, The Millions, and other publications. Previously, she held editorial roles at Canongate Books, the Overlook Press, and Open Road. A graduate of the University of Edinburgh and Goucher College's MFA program in creative nonfiction, she lives in Providence, Rhode Island, with her family.

K. R. Gaddy is a freelance writer and historian. Her work has appeared in the Washington Post, Baltimore Sun, Bitch Magazine, Narratively, Proximity, Atlas Obscura, and OZY, among other publications. She received a Robert W. Deutsch Foundation Rubys Artist Grant for her writing and research.

The event is free but please RSVP here!

Flowers in the Gutter: The True Story of the Edelweiss Pirates, Teenagers Who Resisted the Nazis (Hardcover)