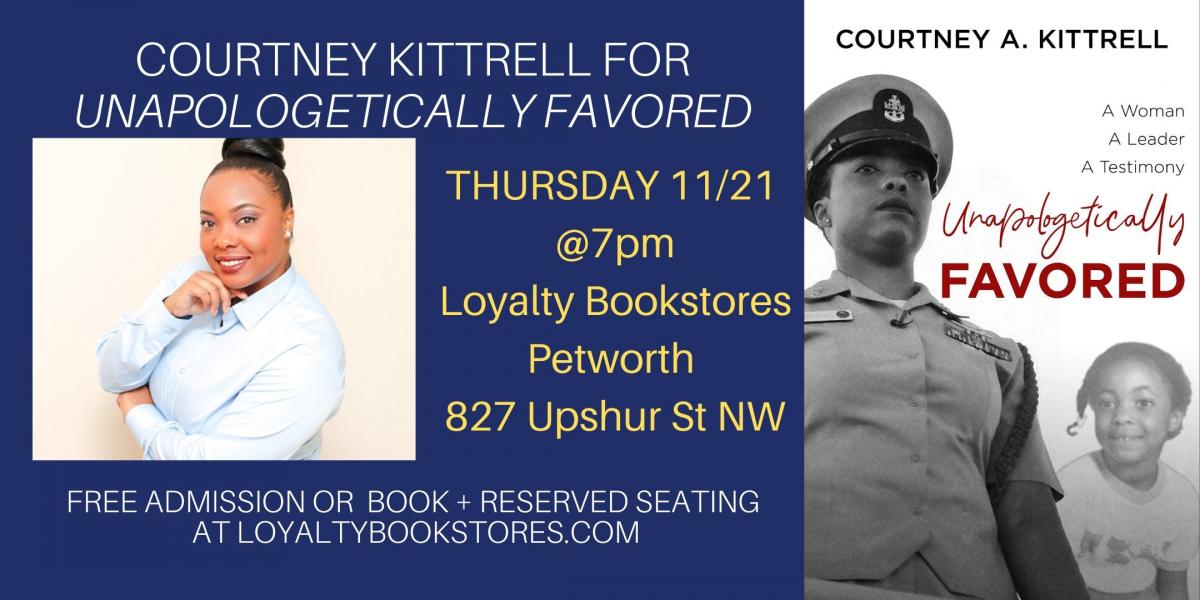 Join us for a reading and Q&A with Courtney Kittrell for her memoir Unapologetically Favored.

Courtney’s riveting memoir, details her coming-of-age story. It reveals her personal battles — including coming to terms with her sexual identity — and career success in the Navy during the “don’t ask, don’t tell” era.

While living a life trying to please others, Courtney simultaneously lost herself. She suffered in silence and experienced depression, feelings of failure, and suicidal thoughts until she developed relationships in the Navy that changed her outlook on herself — empowering her to stand in her purpose and never apologize for who she is. Navy leaders recognized Courtney’s impressive qualities and gave her opportunities to achieve greatness. She excelled each time and matured into a leader and mentor, someone skilled at motivating people and unlocking their potential. Courtney found her purpose.

Unapologetically Favored is a liberating recollection of Courtney’s personal transformation and professional evolution as a leader and mentor who identifies key mental health concerns those in leadership roles face. Her testimony helps raise awareness while reducing the stigma of mental health illness in today’s workforce.

Courtney hopes her unfiltered and raw account of a life filled with abandonment, confusion, strength, hope, and self-acceptance inspires others to hold their heads high, bask in confidence, and walk in purpose. She is proud to call herself a lesbian, a woman and most of all a sailor in the U.S. Navy. She will always be unapologetically favored.

Courtney Kittrell is a native of Greensboro, North Carolina and a 20-year veteran with the United States Navy. Her military experiences have made a mark on her life through personal and leadership struggles. Courtney has deployed onboard USS DWIGHT D. EISENHOWER, USS JOHN F. KENNEDY, USS ENTERPRISE, and USS GEORGE H. W. BUSH. Her journey has taken her to many countries including Spain, Portugal, England, Turkey, Bahrain, Dubai, Israel, Italy and scores of other places. Courtney is a leader of many and a friend to all. She has been motivated to be a voice for others who are battling depression, suicidal thoughts, and mental health issues. She lives with her wife, Tiffany R. Barber, and their dog, Dreyfuss, in Chesapeake, Virginia.

Unapologetically Favored: A woman. A leader. A testimony. (Hardcover)