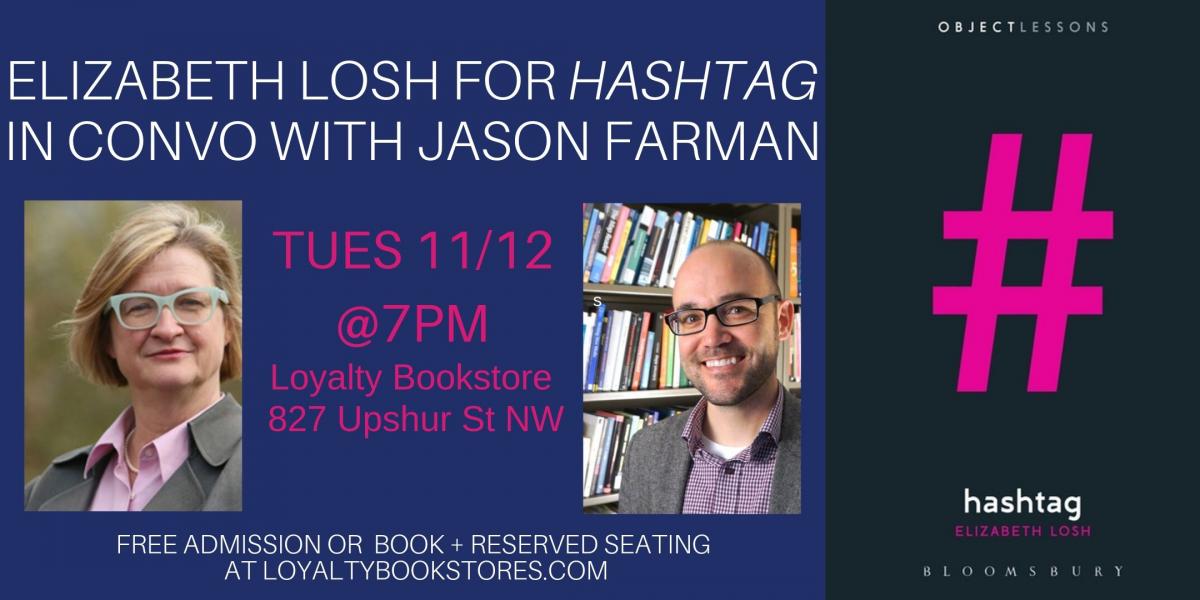 Object Lessons is a series of short, beautifully designed books about the hidden lives of ordinary things.

Hashtags silence as well as shout. They originate in the quiet of the archive and the breathless suspense of the control room, as well as in the roar of rallies in the streets. The #hashtag is a composite creation, with two separate design histories: one involving the crosshatch symbol and one about the choice of letters after it.

Celebration and criticism of hashtag activism rarely addresses the hashtag itself as an object or tries to locate its place in the history of writing for machines. Although hashtags tend to be associated with Silicon Valley invention myths or celebrity power users, the story of the hashtag is much more interesting and surprising, speaking to how we think about naming, identity, and ownership.

Object Lessons is published in partnership with an essay series in The Atlantic.

Elizabeth Losh is the Gale and Steve Kohlhagen Distinguished Professor of English and American Studies at William & Mary, where she specializes in New Media.  Before coming to William and Mary, she directed the Culture, Art, and Technology Program at the University of California, San Diego. She is the is the author of three books: Virtualpolitik, the award-winning The War on Learning: Gaining Ground in the Digital University, and her most recent book Hashtag. She is the co-author of the popular comic book textbook Understanding Rhetoric: A Graphic Guide to Writing. She has published two edited collections about contemporary issues in digital culture: MOOCs and Their Afterlives: Experiments in Scale and Access in Higher Education and Bodies of Information: Intersectional Feminism and Digital Humanities. Her current book-in-progress focuses on the impact of the smart phone in the White House in the Obama and Trump administrations. She has also written a number of frequently cited essays about communities that produce, consume, and circulate online video, videogames, digital photographs, text postings, and programming code. Much of this body of work concerns fake news, online harassment, the legitimation of political institutions through visual evidence, representations of war and violence in global news, and digital activism for human rights causes.

Jason Farman is an Associate Professor at the University of Maryland, College Park where he is the Director of the Design Cultures & Creativity Program and a faculty member with the Human-Computer Interaction Lab. He is a Faculty Associate with Harvard University’s Berkman Klein Center for Internet & Society. He is author of the book Delayed Response: The Art of Waiting from the Ancient to the Instant World, published through Yale University Press. This book was awarded an Alfred P. Sloan Foundation Grant for the Public Understanding of Science and Technology. He is also the author of Mobile Interface Theory, winner of the 2012 Book of the Year Award from the Association of Internet Researchers. He is the editor of the books The Mobile Story (2014) and Foundations of Mobile Media Studies (2016). His work has been featured in The Atlantic, the Wall Street Journal, the New York Times, NPR, 99% Invisible, Atlas Obscura, ELLE Magazine, Brain Pickings, and others.