An Evening with Author Malka Older 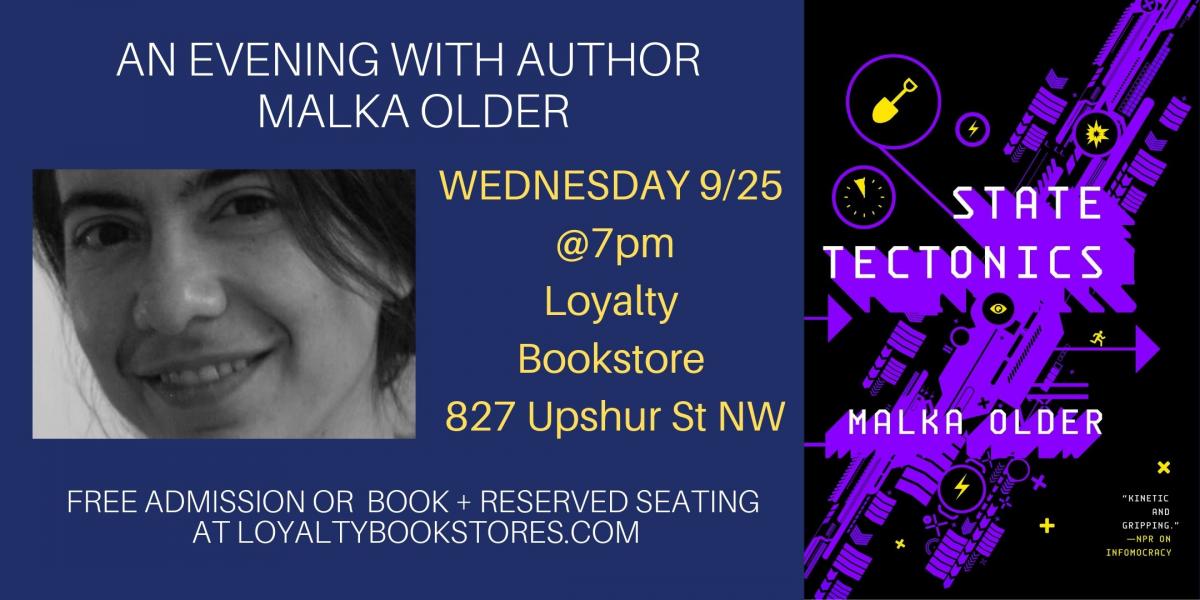 Join us for a reading, Q&A, and signing with speculative fiction author Malka Older. She'll be discussing State Tectonics, the final book in The Centenal Cycle and her upcoming book of short stories And Other Disasters.

One of the best books of 2018, according to Kirkus Reviews, the Chicago Review of Books, and BookRiot.

Campbell Award finalist Malka Older's State Tectonics concludes The Centenal Cycle, the cyberpunk poltical thriller series that began with Infomocracy and is a finalist for the Hugo Award for Best Series.

The future of democracy must evolve or die.

The last time Information held an election, a global network outage, two counts of sabotage by major world governments, and a devastating earthquake almost shook micro-democracy apart. Five years later, it's time to vote again, and the system that has ensured global peace for 25 years is more vulnerable than ever.

Unknown enemies are attacking Information's network infrastructure. Spies, former superpowers, and revolutionaries sharpen their knives in the shadows. And Information's best agents question whether the data monopoly they've served all their lives is worth saving, or whether it's time to burn the world down and start anew.

Bio: MALKA OLDER is a writer, aid worker, and sociologist. Her science-fiction political thriller Infomocracywas named one of the best books of 2016 by Kirkus, Book Riot, and the Washington Post. The Centenal Cycle trilogy, which also includes Null States (2017) and State Tectonics (2018), is a finalist for the Hugo Best Series Award of 2018. She is also the creator of the serial Ninth Step Station, currently running on Serial Box, and her short story collection And Other Disasters will come out in December 2019. Named Senior Fellow for Technology and Risk at the Carnegie Council for Ethics in International Affairs for 2015, she has more than a decade of field experience in humanitarian aid and development. Her doctoral work on the sociology of organizations at Sciences Po Paris explores the dynamics of post-disaster improvisation in governments.