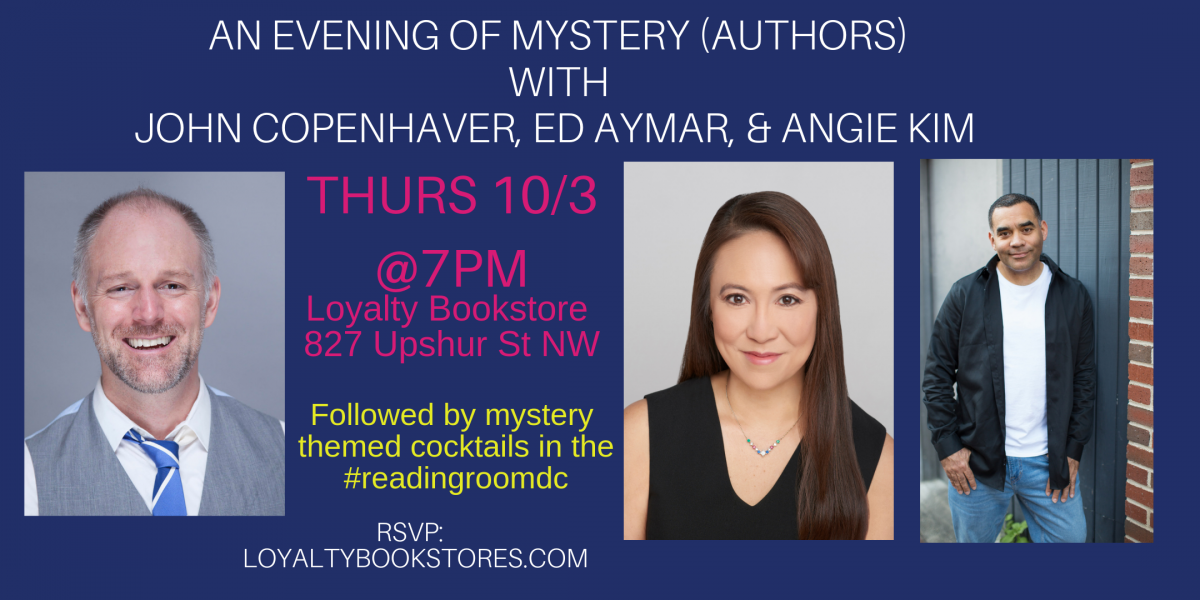 Join us for an evening of readings and engaging discussion with three of today's finest mystery writers John Copenhaver (Dodging and Burning), E.A. Aymar (The Unrepentant), and Angie Kim (Miracle Creek). The discussion will be moderated by Sisters in Crime President, author Sherry Harris. The event will be followed by mystery-themed cocktails in the #readingroomdc with Chantal Tseng!

John Copenhaver's Anthony, Macavity, Strand Critics, Barry, and Lammy Award-nominated historical crime novel, Dodging and Burning (Pegasus, 2018), received a Publishers Weekly starred review, and Library Journal starred review and Debut of the Month. The Associated Press calls it “a riveting debut,” and BOLO Books: “A masterwork of tone and voice … a beacon for voices too often stifled.” Copenhaver writes a crime fiction review column for Lambda Literary called “Blacklight,” and he is the five-time recipient of Artist Fellowships from the D.C. Commission on the Arts and Humanities. He’s a Lambda Fellow, and he has completed residencies at VCCA, VSC, and Ragdale. He’s a Larry Neal awardee, and his work has appeared in CrimeReads, Electric Lit, Glitterwolf, PANK, New York Journal of Books, Washington Independent Review of Books, and others. He chairs the 7-12 grade English department at Flint Hill School. He grew up in the mountains of southwestern Virginia and currently lives in DC with his husband, artist Jeffery Paul (Herrity).

E.A. Aymar’s most recent thriller, The Unrepentant, was published in March of 2019 by Down and Out Books. His other thrillers include the novel-in-stories The Night of the Flood (in which he served as co-editor and contributor), as well as I’ll Sleep When You’re Dead and You’re As Good As Dead. Aymar’s column, “Decisions and Revisions,” appears monthly in the Washington Independent Review of Books, and he is also the Managing Editor of The Thrill Begins, ITW’s online resource for aspiring and debut thriller writers. In addition to ITW, he is a member of the Mystery Writers of America and SinC. Aymar also runs the Noir at the Bar series for Washington, D.C., and has hosted and spoken at a variety of crime fiction, writing, and publishing events nationwide. He was born in Panama and now lives and writes in the D.C./MD/VA triangle.

Angie Kim is the debut author of the national bestseller Miracle Creek, a literary courtroom drama that has been named an IndieNext and LibraryReads pick, a Best Book of 2019 So Far by Time Magazine and Amazon, a Washington Post Summer Reads selection, and a Top 10 AppleBooks Debuts of the Year. Her writing has appeared in Vogue, The New York Times, The Washington Post, Glamour, Salon, and Slate. She moved from Seoul, Korea, to Baltimore as a preteen, and attended Stanford University and Harvard Law School, where she was an editor of the Harvard Law Review, then practiced as a trial lawyer at Williams & Connolly. She lives in Northern Virginia with her husband and three sons.

Dodging and Burning: A Mystery (Paperback)