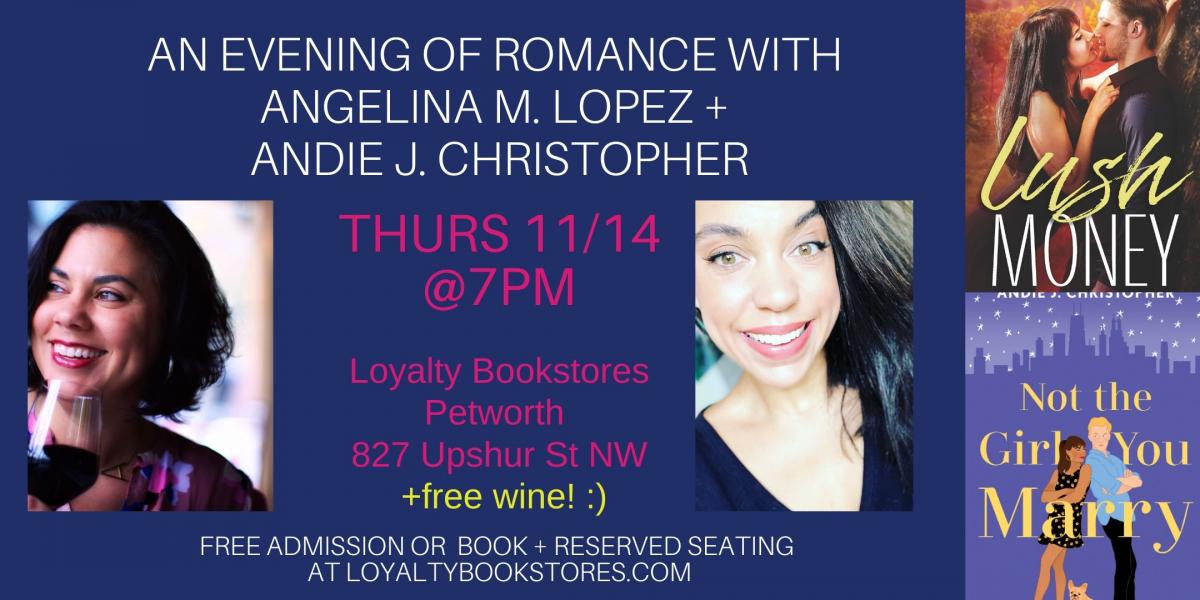 Join us for wine, great conversation, and romance (novels) with authors Angelina Lopez and Andie J. Christopher as we celebrate their new releases Lush Money and Not the Girl You Married.

Angelina M. Lopez wrote "arthur" when her kindergarten teacher asked her what she wanted to be when she grew up. In the years since she learned to spell the word correctly, she's been a journalist for an acclaimed city newspaper, a freelance magazine writer, and a content marketer for small businesses. At long last, she found her way back to "author."

Angelina writes sexy, contemporary stories about strong women and the confident men lucky enough to fall in love with them. The fact that her parents own a vineyard in California’s Russian River Valley might imply a certain hedonism about her; it's not true. She's a wife and a mom who lives in the suburbs of Washington, D.C. She makes to-do lists with perfectly drawn check boxes. She checks them with glee.

Her first book, Lush Money, will be available Oct. 14 from Carina Press. You can find more about her at her website, AngelinaMLopez.com and at @AngelinaMLo on Twitter.

USA Today Bestselling author Andie J. Christopher writes edgy, funny, sexy contemporary romance featuring heat, humor, and dirty talking heroes that make readers sweat. She grew up in a family of voracious readers, and picked up her first Harlequin Romance novel at age twelve when she’d finished reading everything else in her grandmother’s house. It was love at first read. It wasn’t too long before she started writing her own stories — her first heroine drank Campari and drove an Alfa Romeo up a winding road to a minor royal’s estate in Spain. Andie lives in the Nation’s Capital with her French Bulldog, Gus, a stockpile of Campari, and way too many books.

A marriage of convenience and three nights a month. That’s all the sultry, self-made billionaire wants from the impoverished prince. And at the end of the year, she’ll grant him his divorce…with a settlement large enough to save his beloved kingdom.

As a Latinx woman, Roxanne Medina has conquered small-town bullies, Ivy League snobs and boardrooms full of men. She’s earned the right to mother a princess and feel a little less lonely at the top. The offer she’s made is more than generous, and when the contract’s fulfilled, they’ll both walk away with everything they’ve ever wanted.

Príncipe Mateo Ferdinand Juan Carlos de Esperanza y Santos is one of the top winegrowers in the world, and he’s not marrying and having a baby with a stranger. Even if the millions she’s offering could save his once-legendary wine-producing principality.

But the successful, single-minded beauty uses a weapon prince Mateo hadn’t counted on: his own desire.

NOT THE GIRL YOU MARRY -

How To Lose a Guy in 10 Days gets a millennial makeover in this romantic comedy by USA Today bestselling author Andie J. Christopher.

Jack Nolan is a gentleman, a journalist, and unlucky in love. His viral success has pigeon-holed him as the how-to guy for a buzzy, internet media company instead of covering hard-hitting politics. Fed up with his fluffy articles and the app-based dating scene as well, he strikes a deal with his boss to write a final piece de resistance: How to Lose a Girl. Easier said than done when the girl he meets is Hannah Mayfield, and he's not sure he wants her to dump him.

Hannah is an extremely successful event planner who's focused on climbing the career ladder. Her firm is one of the most prestigious in the city, and she's determined to secure her next promotion. But Hannah has a bit of an image problem. She needs to show her boss that she has range, including planning dreaded, romantic weddings. Enter Jack. He’s the perfect man to date for a couple weeks to prove to her boss that she’s not scared of feelings.

Before Jack and Hannah know it, their fake relationship starts to feel all too real—and neither of them can stand to lose each other.

Not the Girl You Marry (Paperback)