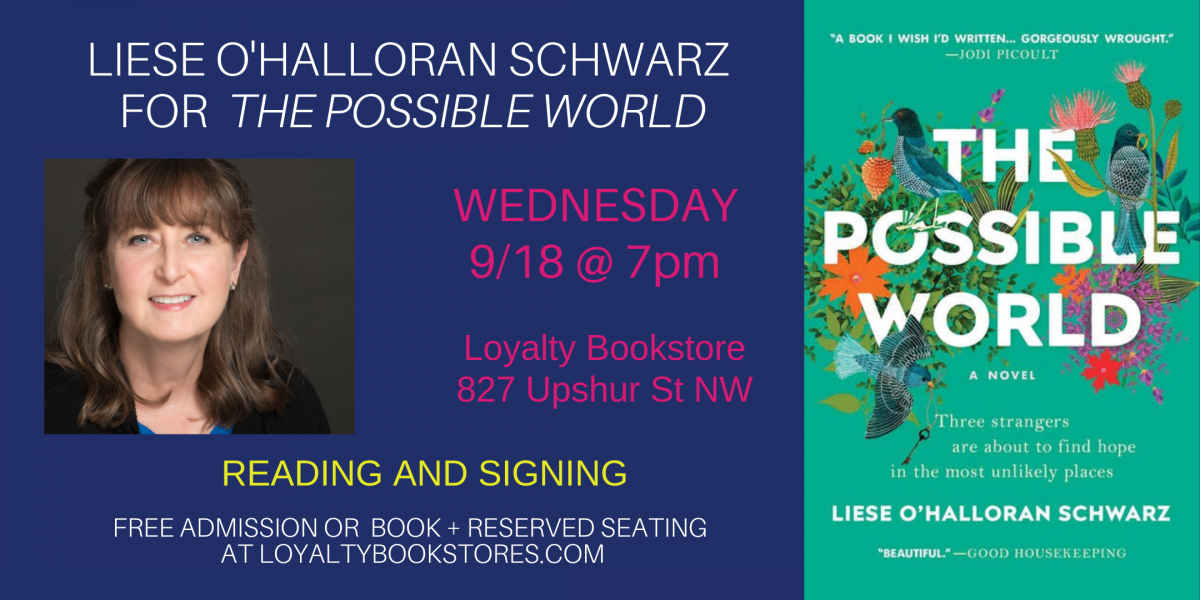 Join us for a reading and signing with Liese O'Halloran Schwarz to celebrate the paperback release her novel The Possible World.

Liese O'Halloran Schwarz grew up in Washington, DC after an early childhood overseas. She attended Harvard University and then medical school at University of Virginia. While in medical school, she won the Henfield/Transatlantic Review Prize and also published her first novel, Near Canaan.

She specialized in emergency medicine and like most doctors, she can thoroughly ruin dinner parties with tales of medical believe-it-or-not. But she won't do that, because she knows how hard you worked to make a nice meal.

The Possible World , published June 2018 from Scribner (US) and Hutchinson (UK), is her second novel.

She currently lives in Chapel Hill, North Carolina, and is at work on the next book.

ABOUT THE POSSIBLE WORLD

A richly compelling and deeply moving novel that traces the converging lives of a young boy who witnesses a brutal murder, the doctor who tends to him, and an elderly woman guarding her long buried past.

It seems like just another night shift for Lucy, an overworked ER physician in Providence, Rhode Island, until six-year-old Ben is brought in as the sole survivor from a horrifying crime scene. He’s traumatized and wordless; everything he knows has been taken from him in an afternoon. It’s not clear what he saw, or what he remembers.

Lucy, who’s grappling with a personal upheaval of her own, feels a profound, unexpected connection to the little boy. She wants to help him…but will recovering his memory heal him, or damage him further?

Across town, Clare will soon be turning one hundred years old. She has long believed that the lifetime of secrets she’s been keeping don’t matter to anyone anymore, but a surprising encounter makes her realize that the time has come to tell her story.

As Ben, Lucy, and Clare struggle to confront the events that shattered their lives, something stronger than fate is working to bring them together.

An expertly stitched story that spans nearly a century—from the Great Depression through the Vietnam War era and into the present—The Possible World is a captivating novel about the complicated ways our pasts shape our identities, the power of maternal love, the loneliness born out of loss, and how timeless bonds can help us triumph over grief.

The Possible World: A Novel (Paperback)