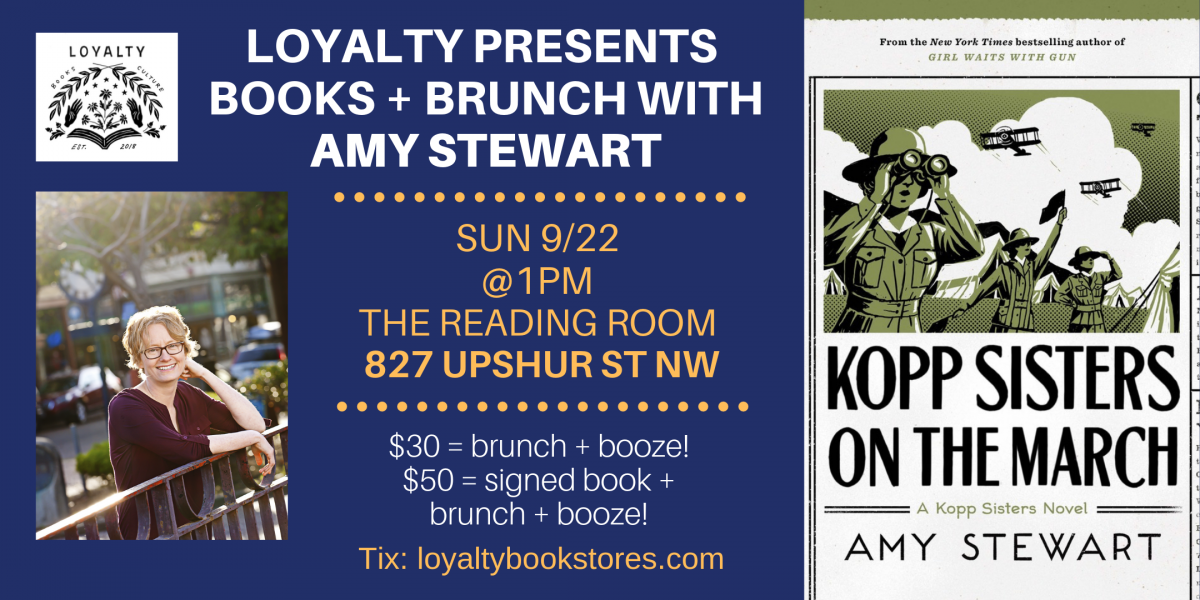 DC reads hard, and we brunch harder. Join us for a fantastic union of both featuring NYT Bestselling author Amy Stewart!

You'll enjoy an intimate brunch meal with the author and your choice of signature punch and mimosas to liven up the meal. Amy Stewart will discuss the latest book in her Kopp Sisters series Kopp Sisters on the March and sign copies amidst a relaxed session of conversation and good food provided by Petworth Citizen in our co-event space: The Reading Room. You'll be surrounded by books, good light, and likeminded nerds who understand that the way to spend a Sunday is with a mimosa and a great read-- only now with a wonderful author and history maven: Amy Stewart.

ABOUT KOPP SISTERS ON THE MARCH
It’s the spring of 1917 and change is in the air. American women have done something remarkable: they’ve banded together to create military-style training camps for women who want to serve. These so-called National Service Schools prove irresistible to the Kopp sisters, who leave their farm in New Jersey to join up.

When an accident befalls the matron, Constance reluctantly agrees to oversee the camp—much to the alarm of the Kopps’ tent-mate, the real-life Beulah Binford, who is seeking refuge from her own scandalous past under the cover of a false identity. Will she be denied a second chance? And after notoriety, can a woman’s life ever be her own again?

In Kopp Sisters on the March, the women of Camp Chevy Chase face down the skepticism of the War Department, the double standards of a scornful public, and the very real perils of war. Once again, Amy Stewart has brilliantly brought a little-known moment in history to light with her fearless and funny Kopp sisters novels.

PRAISE FOR KOPP SISTERS ON THE MARCH
"Told in Stewart’s nimble, witty prose, this fifth in the popular series is based largely on fact and offers a paean to patriotism and the role women have played in war, even a century ago. Devoted fans will be pleased with the tantalizing hint Stewart provides about what lies ahead for Constance."
—Booklist, starred review

A thrilling mix of history and feminism, this new “Kopp” story contains the same captivating storytelling as the first one, with plenty of nuggets for series fans.
—Library Journal, starred review

About AMY STEWART:
Amy Stewart is the award-winning author of nine books, including her acclaimed fiction debut GIRL WAITS WITH GUN and the best-sellers THE DRUNKEN BOTANIST and WICKED PLANTS. She and her husband own a bookstore called Eureka Books. She lives in Portland, Oregon.

ISBN: 9781328736529
Availability: Not In Store - Available to special order for pickup or ship. For even speediest shipping we suggest our Bookshop.org page!
Published: Mariner Books - September 17th, 2019