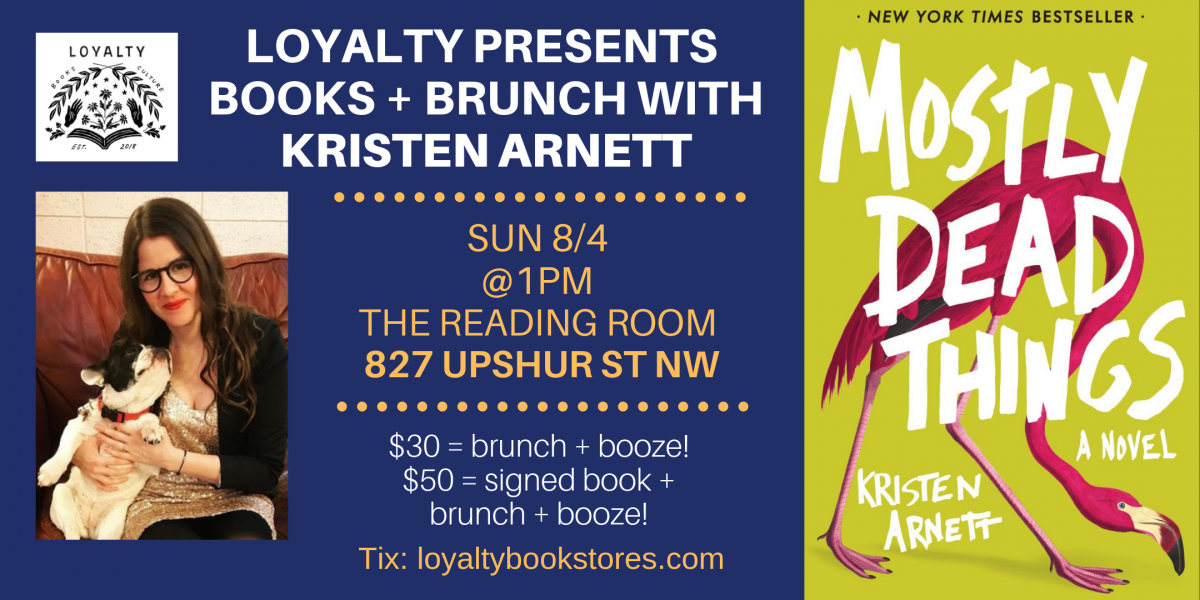 DC reads hard, and we brunch harder. Join us for a fantastic union of both featuring debut NYT Bestselling author Kristen Arnett!

You'll enjoy an intimate brunch meal with the author and your choice of signature punch and mimosas to liven up the meal. Kristen Arnett will discuss her new novel, Mostly Dead Things, and sign copies amidst a relaxed session of conversation and good food provided by Petworth Citizen in our co-event space: The Reading Room. You'll be surrounded by books, good light, and likeminded nerds who understand that the way to spend a Sunday is with a mimosa and a great read-- only now with a wonderful author and your hilarious internet bff: Kristen Arnett.

One morning, Jessa-Lynn Morton walks into the family taxidermy shop to find that her father has committed suicide, right there on one of the metal tables. Shocked and grieving, Jessa steps up to manage the failing business, while the rest of the Morton family crumbles. Her mother starts sneaking into the shop to make aggressively lewd art with the taxidermied animals. Her brother Milo withdraws, struggling to function. And Brynn, Milo’s wife―and the only person Jessa’s ever been in love with―walks out without a word. As Jessa seeks out less-than-legal ways of generating income, her mother’s art escalates―picture a figure of her dead husband and a stuffed buffalo in an uncomfortably sexual pose―and the Mortons reach a tipping point. For the first time, Jessa has no choice but to learn who these people truly are, and ultimately how she fits alongside them.

Kristen Arnett’s debut novel is a darkly funny, heart-wrenching, and eccentric look at loss and love.

KRISTEN ARNETT is a queer fiction and essay writer. She won the 2017 Coil Book Award for her debut short fiction collection, Felt in the Jaw, and was awarded Ninth Letter's 2015 Literary Award in Fiction. She's a columnist for Literary Hub and her work has either appeared or is upcoming at North American Review, The Normal School, Gulf Coast, TriQuarterly, Guernica, Electric Literature, Volume 1 Brooklyn, Bennington Review, Tin House Flash Fridays/The Guardian, Salon, The Rumpus, and elsewhere.

“Darkly funny, both macabre and irreverent, and its narrator is so real that every time I stopped reading the book, I felt a tiny pull at the back of my mind, as if I’d left a good friend in the middle of a conversation.” —Ilana Masad, NPR

“Mostly Dead Things captures the humor and strangeness of Florida without the easy stereotypes. . . . The central characters in this sad and funny book are . . . complex, flesh-and-blood human beings.” —Washington Post

“Arnett possesses all the bravery her characters dream of. There’s none of the shyness and self-consciousness of so much American fiction that masks itself as austerity. She writes comic set pieces to make you laugh, sex scenes to turn you on. The action flips from the past to the present, swimming through first love and first grief on a slick of red Kool-Aid and vodka, suntan oil and fruity lip gloss, easy and unforced. This book is my song of the summer.” —Parul Sehgal, The New York Times