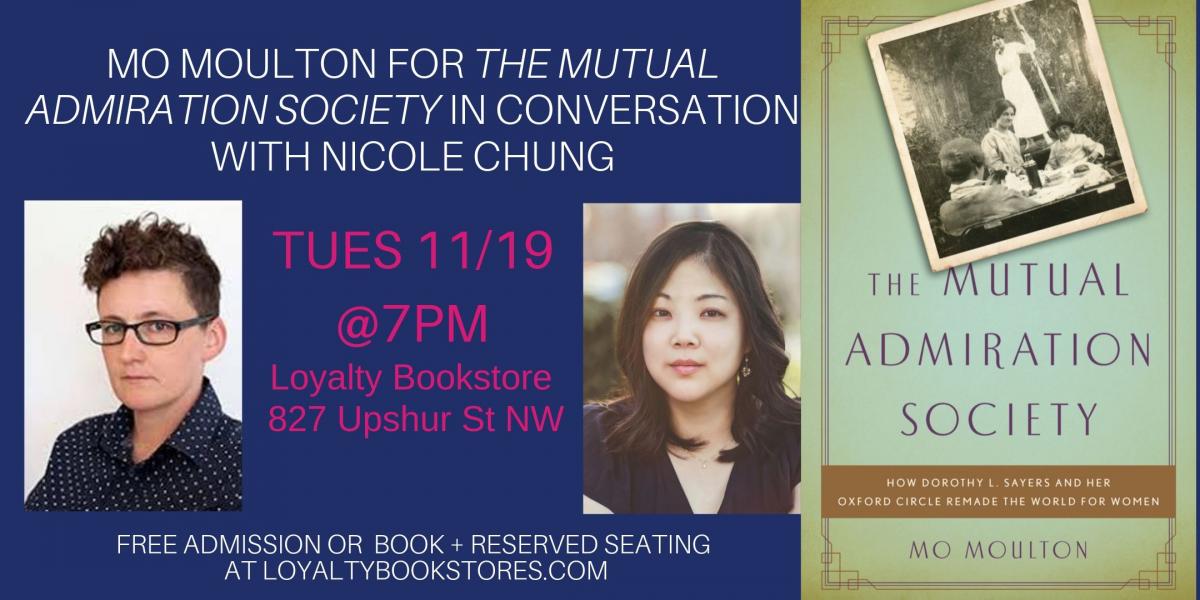 Join us for a conversation between Mo Moulton for their new book The Mutual Admiration Society: How Dorothy L. Sayers and her Oxford Circle Remade the World for Women and author Nicole Chung.

Dorothy L. Sayers is now famous for her Lord Peter Wimsey and Harriet Vane detective series, but she was equally well known during her life for an essay asking “Are Women Human?” Women’s rights were expanding rapidly during Sayers’s lifetime; she and her friends were some of the first women to receive degrees from Oxford. Yet, as historian Mo Moulton reveals, it was clear from the many professional and personal obstacles they faced that society was not ready to concede that women were indeed fully human.

Mo Moulton is currently a lecturer in the history department of the University of Birmingham. They earned their PhD in history from Brown University in 2010 and taught in the History & Literature program at Harvard University for six years. Their previous book, Ireland and the Irish in Interwar England, was named a 2014 "Book of the Year" by History Today and was the runner-up for the Royal History Society's 2015 Whitfield Prize for first book in British or Irish history. Moulton regularly writes for outlets such as The Atlantic, Public Books, Disclaimer Magazine, and the Toast. They live in London, UK.

Nicole Chung was born and raised in the Pacific Northwest. Her nationally bestselling debut memoir All You Can Ever Know was a finalist for the National Book Critics Circle Award for Autobiography and the Indies Choice Adult Nonfiction Book of the Year, longlisted for the PEN Open Book Award, and named a Best Book of the Year by The Washington Post, The Boston Globe, NPR, TIME, Newsday, Library Journal, and many others. Nicole has written for many publications, including The New York Times, GQ, The Guardian, Vulture, and Real Simple, and has taught writing workshops for Kundiman, Catapult, and PEN/Faulkner’s Writers in Schools program here in DC. She is the editor in chief of Catapult magazine and the former managing editor of The Toast.

The Mutual Admiration Society: How Dorothy L. Sayers and her Oxford Circle Remade the World for Women (Hardcover)