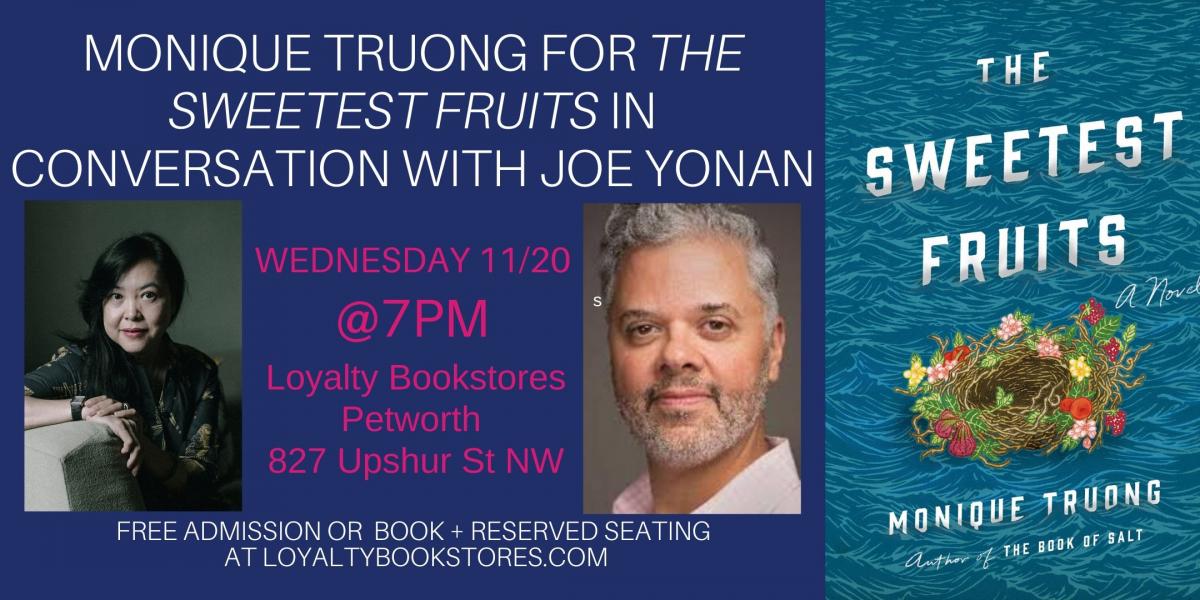 Join us for a reading and Q&A with Monique Truong for The Sweetest Fruits followed by a discussion with The Washington Post's Joe Yonan.

THE SWEETEST FRUITS introduces readers to a trio of tenacious, brave, and inspiring women who have largely been left out of the historical record—until now. In her beautifully crafted and captivating work, Truong retells the remarkable life story of 19th century writer, wanderer, and epicurean Lafcadio Hearn through the eyes of those who cared for him and made his work possible. We begin with his mother, Rosa Cassimati: A Greek woman who willed herself out of her father’s cloistered house, married an Irish officer, and came to Ireland with her two-year-old son in 1852, only to be forced to leave without him soon after. Then, we meet Alethea Foley: An African American woman born into slavery who meets and falls in love with a young and ambitious Lafcadio in Cincinnati—only to later find herself written out of his life. And finally, Koizumi Setsu: The daughter of a former samurai, Lafcadio’s second wife, and his unsung literary collaborator. Each of these women speak their truth about the man whom they knew as Patricio, Patrick, Pat, Lafcadio, or Yakumo—the man who would circumnavigate the globe to find a home—as Truong brilliantly imagines their own quests to create lives unbounded by gender, race, or custom. What emerges is a story of recovering the lost voices of women—and especially the voices of women of color—as each section is breathlessly told in the distinct voices of Rosa, Alethea, and Setsu. Delicate, rapturous prose captures the reader, as Truong examines how the touchstones that defined Lafcadio’s life—the freedom to travel, the power to write, the ability to define high cuisine—were denied to the women in his life. But the trio we meet in THE SWEETEST FRUITS were adventurers, scribes, and chefs in their own right. Here, Truong finally shares their voices with the world. Truong decided to explore the life of Lafcadio Hearn in THE SWEETEST FRUITS after discovering a surprising morsel of a biography in a copy of The New Encyclopedia of Southern Culture that spoke of a childhood in Dublin, and travels to Cincinnati and New Orleans. There, he would publish the earliest collection of Creole recipes, La Cuisine Créole, which remains an invaluable document of the city’s rich culinary heritage. The entry concludes with Lafcadio making a home for himself in Japan, under the name Koizumi Yakumo, and authoring a series of Japanese folk tales. These sparse details left Truong with countless questions about the literary and culinary scholar, and she set out to discover what—and who—had been left out of his story. After years of research, what she unearthed was a man of contradictions. A man both ahead of his time—one who reveled in the heady, exuberant mixture of peoples and flavors that greeted him throughout his travels—and of his time, limited by late 19th century biases and blinders. How to tell the story of such a man? You invite the women to do the talking.

THE SWEETEST FRUITS may recount Lafcadio’s story, but he is relegated to a supporting, near silent role as Rosa, Alethea, and Setsu share the hopes that drove them forward and the fears that held them back in these imagined recollections. Rich in historical detail and bolstered by the captivating, irrepressible voices of its narrators, THE SWEETEST FRUITS is Truong at her finest.

Monique Truong is the author of three novels—The Book of Salt; Bitter in the Mouth; and now, The Sweetest Fruits, and her work has been published in fifteen countries. Her awards and honors include the PEN/Robert Bingham Fellowship, the New York Public Library Young Lions Award, the Asian American Literary Award, and the American Academy of Arts and Letters Rosenthal Family Foundation Award.

Joe Yonan is the Food and Dining editor of The Washington Post, supervising food coverage in the features department. He is the author of the upcoming cookbook "Cool Beans" (Ten Speed Press, February 2020), the editor of "America The Great Cookbook" (Weldon Owen, 2017) and has written two other cookbooks for Ten Speed: “Eat Your Vegetables” (2013) and “Serve Yourself" (2011). He writes The Post's Weeknight Vegetarian column.

The Sweetest Fruits: A Novel (Hardcover)