POSTPONED! What If? Readings from the DC Speculative Wordsmiths

This event is postponed due to the health crisis and updates will be posted here and on social media when we have a new date! 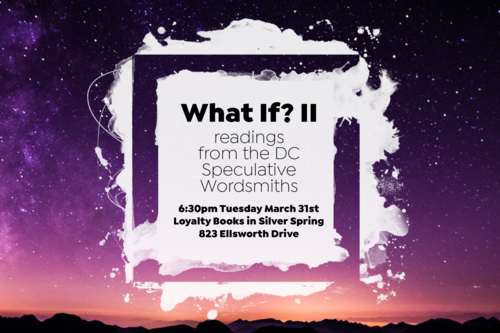 Join six speculative fiction authors from the DC area for a reading of their work and discussion of writing fantasy and science fiction in our time. Wine will be served! Event is free and open to the publix but RSVP encourage below. Authors will have books for sale at the event and will sign after the talk.

Born in Seoul, Korea, Robin Ha grew up reading and drawing comics. At fourteen she moved to the United States. After graduating from the Rhode Island School of Design with a BFA in illustration, she moved to New York City and started a career in the fashion industry. Her work has been published in independent comics anthologies including Secret Identities and The Strumpet, as well as in the pages of Marvel Comics and Heavy Metal Magazine. Her blog Banchan in 2 Pages features Korean recipe comics. She currently resides in Falls Church, Virginia.

Marianne Kirby writes about bodies both real and imagined. She plays with the liminal space between vanishing and visibility. She authored Dust Bath Revival and its sequel Hogtown Market; she co-authored Lessons from the Fatosphere: Quit Dieting and Declare a Truce with Your Body. A long-time writer, editor, and activist, Marianne has contributed to women’s interest publications, news outlets, and tv shows that require people to have opinions. She has been published by the Guardian, xoJane, the Daily Dot, Bitch Magazine, Time, and others. She has appeared on tv and radio programs ranging from the Dr. Phil Show to Radio New Zealand.

Natasha D. Lane is a friend of most things caffeinated, a lover of books, and a writing warrior to her core. As a believer that “the pen is mightier than the sword,” she graduated from Juniata College in 2015 with hopes to become a journalist. Instead, life took her on a different path and Natasha found herself digging up a manuscript from her childhood. This dusty stack of papers would become The Pariah Child & the Ever-Giving Stone. With one book under her belt, Natasha went on to release The Woman In the Tree: The True Story of Camelot, The Pariah Child: Sarafina’s Return, and her upcoming work The Pariah Child: Serwa’s Descendants.

C. S. MALERICH grew up in northern New Jersey. Storytelling was an early love, her first and favorite subjects being rabbits, felines, and horses. As an adolescent, she became interested in fantasy and mythology, which led her to major in Classics at Montclair State University. In 2005, she followed her best friend to Washington, DC, where she continued avoiding fluency in Greek and Latin and taught mythology to undergrads at the University of Maryland. She’s since pursued interests in folklore, cultural studies, and public health, sometimes all at once.Her fiction often explores intersections of liberation and justice, with an infectious dance beat. Some of her work has appeared in Apparition Lit, Ares Magazine, and the Among Animals anthologies from eco-fiction publisher Ashland Creek Press. Her novel Fire & Locket was published in 2019.C.S. continues to live and work in the DC area.

Lina Rather is a speculative fiction author from Michigan, now living in Washington, D.C. Her stories have appeared in a variety of publications, including Shimmer, Flash Fiction Online, and Lightspeed. When she isn’t writing, she likes to cook, go hiking, and collect terrible 90s comic books.

Dave Ring is a speculative fiction writer and also the community chair of the OutWrite LGBTQ Literary Festival in Washington, DC. He was a 2013 Lambda Literary Fellow, a 2018 resident of Futurescapes and Disquiet, and a 2019 resident of Sundress Academy for the Arts. He is an active member of the DC-based Speculative Wordsmiths. Dave is the publisher and managing editor of Neon Hemlock Press. He is the editor of Broken Metropolis: Queer Tales of a City That Never Was, an anthology from Mason Jar Press.