An Evening with Tochi Onyebuchi at the PETWORTH NEIGHBORHOOD LIBRARY 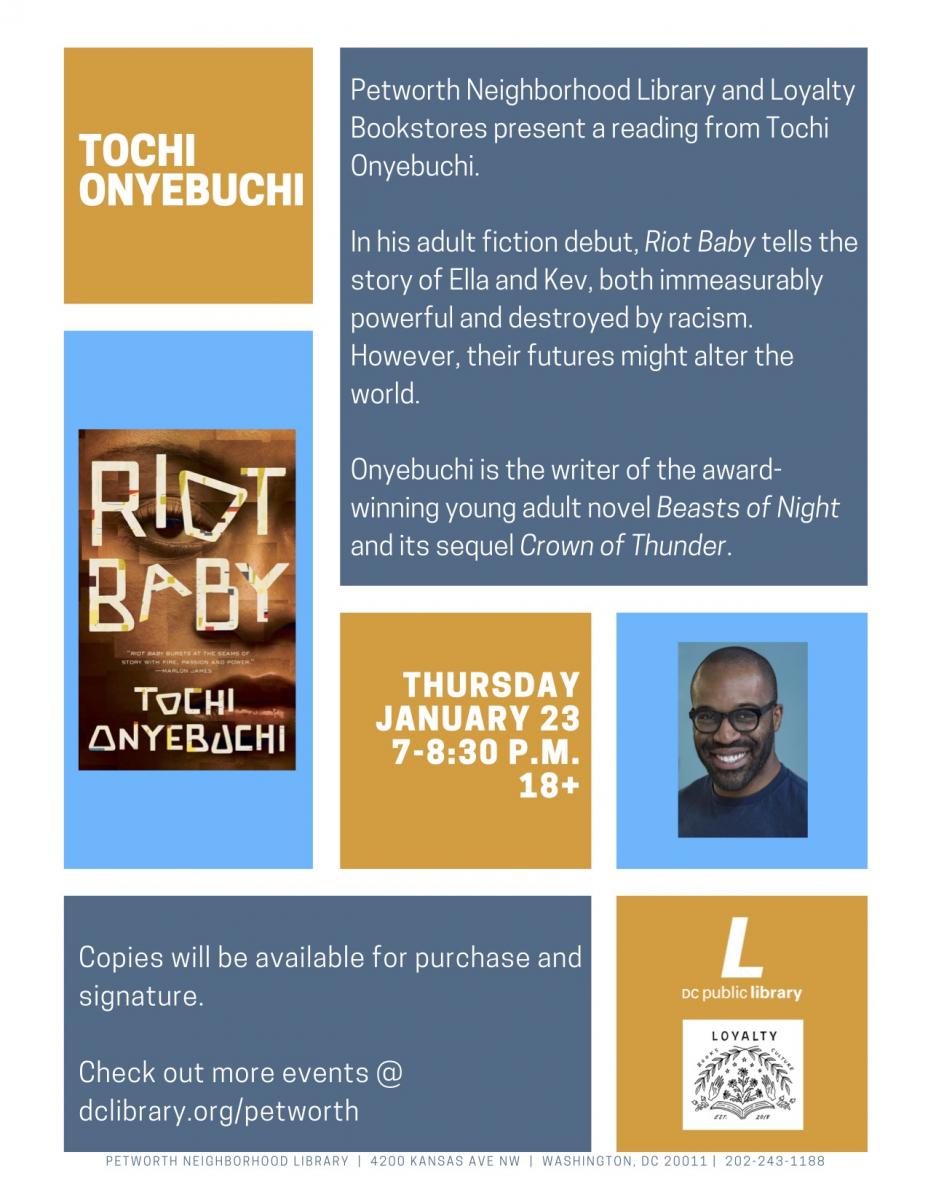 Join us for an exciting collaboration between Loyalty Bookstores and Petworth Neighborhood Library for an evening with author Tochi Onyebuchi, held at the Petworth Library for his latest release Riot Baby.

Rooted in foundational loss and the hope that can live in anger, Riot Baby is both a global dystopian narrative an intimate family story with quietly devastating things to say about love, fury, and the black American experience.

Ella and Kev are brother and sister, both gifted with extraordinary power. Their childhoods are defined and destroyed by structural racism and brutality. Their futures might alter the world. When Kev is incarcerated for the crime of being a young black man in America, Ella―through visits both mundane and supernatural―tries to show him the way to a revolution that could burn it all down.

Tochi Onyebuchi is the author of Beasts Made of Night, its sequel Crown of Thunder, War Girls, and the upcoming Riot Baby, forthcoming from Tor.com in January 2020. He has graduated from Yale University, New York University’s Tisch School of the Arts, Columbia Law School, and L’institut d’études politiques with a Masters degree in Global Business Law.

His short fiction has appeared in Asimov's Science Fiction, Omenana, Black Enough: Stories of Being Young & Black in America, and elsewhere. His non-fiction has appeared in Uncanny Magazine, Nowhere Magazine, Tor.com and the Harvard Journal of African-American Public Policy. He is the winner of the Ilube Nommo Award for Best Speculative Fiction Novel by an African and has appeared in Locus Magazine's Recommended Reading list.

Born in Massachusetts and raised in Connecticut, Tochi is a consummate New Englander, preferring the way the tree leaves turn the color of fire on I-84 to mosquitoes and being able to boil eggs on pavement. He has worked in criminal justice, the tech industry, and immigration law, and prays every day for a new album from System of a Down.

THIS EVENT IS FREE, BUT RSVP BELOW!