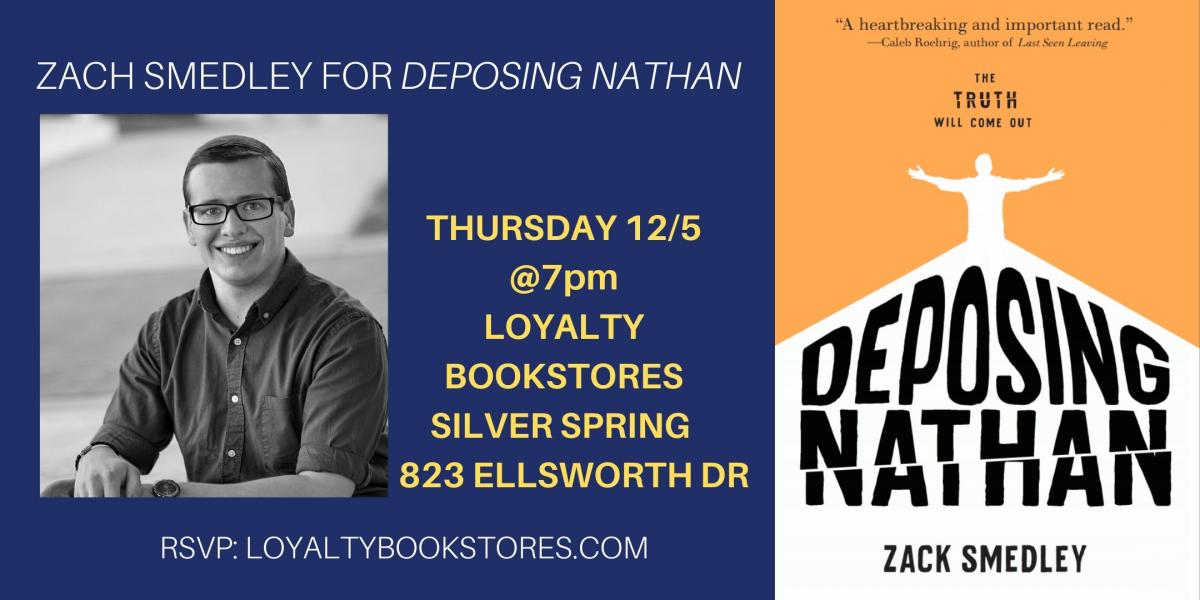 Join us for a evening with YA author Zach Smedley for his book Deposing Nathan.

For sixteen years, Nate was the perfect son—the product of a no-nonsense upbringing and deep spiritual faith. Then he met Cam, who pushed him to break rules, dream, and accept himself. Conflicted, Nate began to push back. With each push, the boys became more entangled in each others’ worlds…but they also spiraled closer to their breaking points. And now all of it has fallen apart after a fistfight-turned-near-fatal incident—one that’s left Nate with a stab wound and Cam in jail.

Now Nate is being ordered to give a statement, under oath, that will send his best friend to prison. The problem is, the real story of what happened between them isn’t as simple as anyone thinks. With all eyes on him, Nate must make his confessions about what led up to that night with Cam…and in doing so, risk tearing both of their lives apart.

Zack Smedley was born in 1995, in an endearing Southern Maryland county almost no one has heard of. He earned a degree in Chemical Engineering from UMBC in 2017, and he currently works within the field. Additionally, he’s taken several creative- and script-writing courses, and in 2015 he hosted a workshop on the modern publishing industry.

As a member of the LGBT community, his goal is to give a voice to marginalized young adults through gritty, morally complex narratives. He spends his free time building furniture, baking, modifying electronic systems, and managing his obsession with Aaron Sorkin.  You can find him on twitter at @zack_smedley.