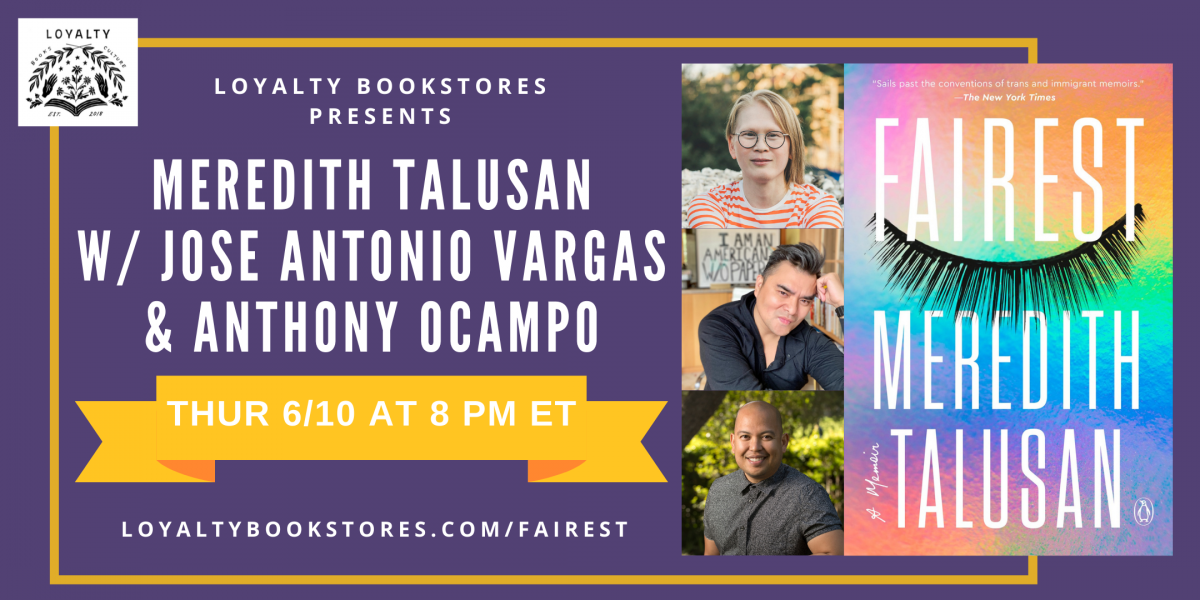 Loyalty is so excited to celebrate the paperback release of Fairest with Meredith Talusan, Jose Antonio Vargas, and Anthony Ocampo! This event will be held digitally via Crowdcast. Click here to register for the event with a donation of any amount of your choice or you can order the book below to be added to the event's registration list. Donations will go to BLM DC. There will also be an option to snag the book during the event.

Finalist for the 2021 Lambda Literary Award for Transgender Nonfiction

"Talusan sails past the conventions of trans and immigrant memoirs." --The New York Times Book Review

"A ball of light hurled into the dark undertow of migration and survival." --Ocean Vuong, author of On Earth We're Briefly Gorgeous

A singular, beautifully written coming-of-age memoir of a Filipino boy with albinism whose story travels from an immigrant childhood to Harvard to a gender transition and illuminates the illusions of race, disability, and gender

Fairest is a memoir about a precocious boy with albinism, a "sun child" from a rural Philippine village, who would grow up to become a woman in America. Coping with the strain of parental neglect and the elusive promise of U.S. citizenship, Talusan found childhood comfort from her devoted grandmother, a grounding force as she was treated by others with special preference or public curiosity. As an immigrant to the United States, Talusan came to be perceived as white. An academic scholarship to Harvard provided access to elite circles of privilege but required Talusan to navigate through the complex spheres of race, class, sexuality, and her place within the gay community. She emerged as an artist and an activist questioning the boundaries of gender. Talusan realized she did not want to be confined to a prescribed role as a man, and transitioned to become a woman, despite the risk of losing a man she deeply loved. Throughout her journey, Talusan shares poignant and powerful episodes of desirability and love that will remind readers of works such as Call Me By Your Name and Giovanni's Room. Her evocative reflections will shift our own perceptions of love, identity, gender, and the fairness of life.

Jose Antonio Vargas is a Pulitzer Prize-winning journalist, Emmy-nominated filmmaker, and Tony-nominated producer. A leading voice for the human rights of immigrants, he founded the non-profit media advocacy organization Define American, named one of the World’s Most Innovative Companies by Fast Company. In 2020, Fortune named him one of its “40 under 40” most influential people in government and politics. His best-selling memoir, Dear America: Notes of an Undocumented Citizen, was published by HarperCollins in 2018. His second book, White Is Not a Country, will be published by Pantheon Books in 2023.

Anthony Ocampo, Ph.D. is a writer and sociologist from Los Angeles. He is the author of The Latinos of Asia: How Filipino Americans Break the Rules of Race and the forthcoming Brown and Gay in LA: Queer Sons of Immigrants Coming of Age. He is a Ford Foundation, Voices of Our Nation (VONA), Tin House, and Jack Jones “Culture, Too” fellow. Dr. Ocampo is Professor of Sociology at California Polytechnic State University-Pomona and Faculty Director of the California State University Chancellor’s Doctoral Incentive Program.

The Latinos of Asia: How Filipino Americans Break the Rules of Race (Paperback)