Will Jawando and Michael Strautmanis for MY SEVEN BLACK FATHERS 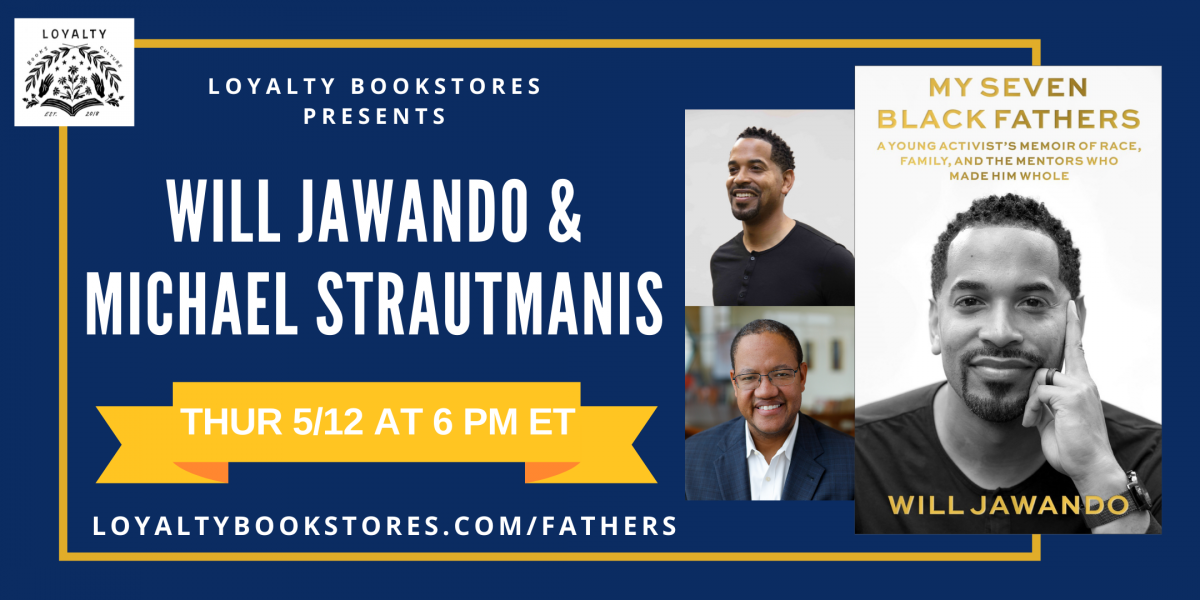 Loyalty is delighted to welcome Will Jawando and Michael Strautmanis for a celebration of My Seven Black Fathers: A Young Activist's Memoir of Race, Family, and the Mentors Who Made Him Whole! This event is free to attend and will be held digitally via Crowdcast. Click here to register for the event. You can also order a copy of the book below to be automatically added to the registration list, and there will be an option to snag the book during the event.

"Will Jawando's account of mentorship, service, and healing lays waste to the racist stereotype of the absent Black father. By arguing that Black fathers are not just found in individual families, but are indeed the treasure of entire Black communities, Will makes the case for a bold idea: that Black men can counter racist ideas and policies by virtue of their presence in the lives of Black boys and young men. This is a story we need to hear." —Ibram X. Kendi, New York Times–bestselling author of How to be an Antiracist

Will Jawando tells a deeply affirmative story of hope and respect for men of color at a time when Black men are routinely stigmatized. As a boy growing up outside DC, Will, who went by his Nigerian name, Yemi, was shunted from school to school, never quite fitting in. He was a Black kid with a divorced white mother, a frayed relationship with his biological father, and teachers who scolded him for being disruptive in class and on the playground. Eventually, he became close to Kalfani, a kid he looked up to on the basketball court. Years after he got the call telling him that Kalfani was dead, another sickening casualty of gun violence, Will looks back on the relationships with an extraordinary series of mentors that enabled him to thrive.

Among them were Mr. Williams, the rare Black male grade school teacher, who found a way to bolster Will’s self-esteem when he discovered he was being bullied; Jay Fletcher, the openly gay colleague of his mother who got him off junk food and took him to his first play; Mr. Holmes, the high school coach and chorus director who saw him through a crushing disappointment; Deen Sanwoola, the businessman who helped him bridge the gap between his American upbringing and his Nigerian heritage, eventually leading to a dramatic reconciliation with his biological father; and President Barack Obama, who made Will his associate director of public engagement at the White House—and who invited him to play basketball on more than one occasion. Without the influence of these men, Will knows he would not be who he is today: a civil rights and education policy attorney, a civic leader, a husband, and a father.

Will Jawando is an attorney, an activist, a community leader, and a councilmember in Montgomery County, Maryland, a diverse community of more than one million residents. Called “the progressive leader we need” by the late congressman John Lewis, Jawando has worked with Speaker Nancy Pelosi, Senator Sherrod Brown, and President Barack Obama. His writing has appeared in The Washington Post and The Root and on BET.com, and his work has been featured in The New York Times and New York magazine and on NPR, NBC News, and MTV. He regularly appears on CNN, MSNBC and other media outlets.

Michael Strautmanis serves as the Obama Foundation’s Executive Vice President for Civic Engagement, building its strategy to extend President and Mrs. Obama’s legacy through the development of the Obama Presidential Center and civic engagement programming in Chicago. Through community affairs, government relations, and strategic partnerships, Michael has built the Foundation's impact agenda in Chicago to create an anchor institution that will catalyze economic renewal on the South Side of Chicago and develop the city’s next generation of leaders. In this role, he is in dialogue with Chicagoans from every walk of life who are looking to learn more about the Obama Presidential Center and participate in the Foundation’s mission to empower leaders to give back to their communities. Michael also leads the My Brother's Keeper Alliance, President Obama's signature initiative to create safe, healthy, and nurturing communities for boys and young men of color across the nation.

Before joining the Obama Foundation, Michael spent over a decade in Washington, D.C., working to increase access to economic opportunity, strengthen the judicial system, and champion equity and inclusion in the White House, federal agencies, and Congress. He served in the Obama White House for four of those years as Chief of Staff to Senior Advisor Valerie Jarrett in the Office of Public Engagement and Intergovernmental Affairs. After President Obama’s first term, he joined the Walt Disney Company where he led an enterprise-wide initiative to consolidate, focus, and deepen the impact of Disney’s corporate social responsibility programs. Michael began his career in government working in the Office of General Counsel at the U.S. Agency for International Development. He did stints at the House of Representatives and American Association for Justice before joining then-Senator Obama’s congressional staff, campaign, and subsequent transition team.

An active member of Chicago’s civic community, Michael serves on the boards of Everside Health, Inc., the Lyric Opera of Chicago, City Year Chicago, the Emerald South Economic Development Collaborative, and the Billie Jean King Leadership Institute. Mike received his bachelor’s degree from the University of Illinois and a J.D. from the University of Illinois College of Law.

My Seven Black Fathers: A Young Activist's Memoir of Race, Family, and the Mentors Who Made Him Whole (Hardcover)