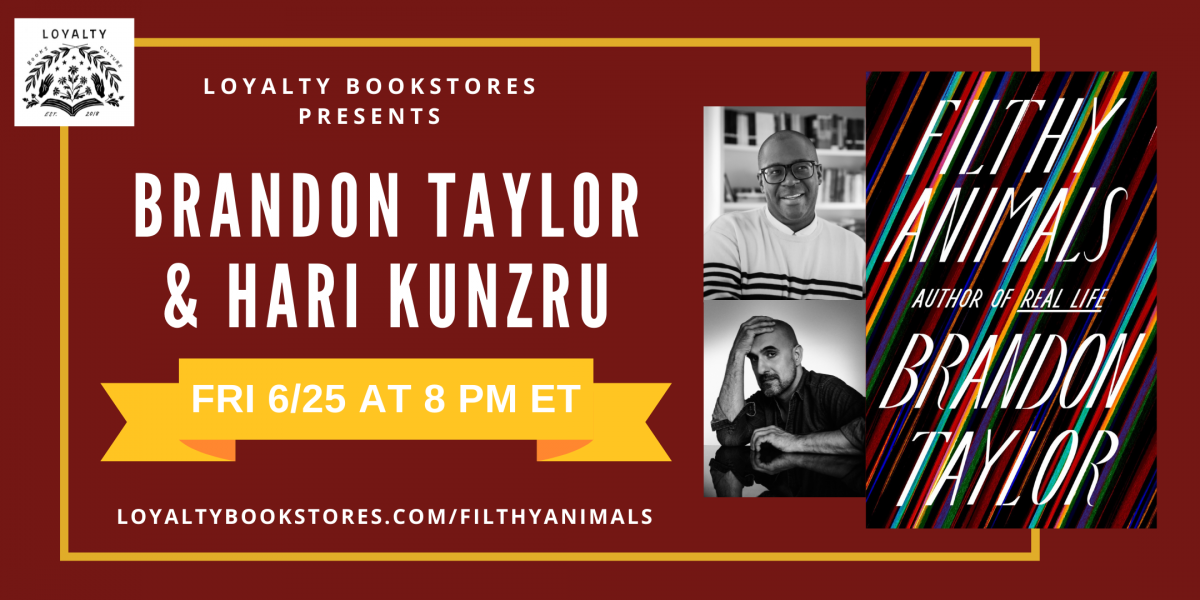 Loyalty is super psyched to welcome Brandon Taylor and Hari Kunzru to celebrate the release of Filthy Animals! This event will be held digitally via Crowdcast. Click here to register for the event with a donation of any amount of your choice or you can order the book below to be added to the event's registration list. Donations will go to BLM DC. There will also be an option to snag the book during the event.

A group portrait of young adults enmeshed in desire and violence, a hotly charged, deeply satisfying new work of fiction from the author of Booker Prize finalist Real Life

In the series of linked stories at the heart of Filthy Animals, set among young creatives in the American Midwest, a young man treads delicate emotional waters as he navigates a series of sexually fraught encounters with two dancers in an open relationship, forcing him to weigh his vulnerabilities against his loneliness. In other stories, a young woman battles with the cancers draining her body and her family; menacing undercurrents among a group of teenagers explode in violence on a winter night; a little girl tears through a house like a tornado, driving her babysitter to the brink; and couples feel out the jagged edges of connection, comfort, and cruelty.

One of the breakout literary stars of 2020, Brandon Taylor has been hailed by Roxane Gay as “a writer who wields his craft in absolutely unforgettable ways.” With Filthy Animals he renews and expands on the promise made in Real Life, training his precise and unsentimental gaze on the tensions among friends and family, lovers and others. Psychologically taut and quietly devastating, Filthy Animals is a tender portrait of the fierce longing for intimacy, the lingering presence of pain, and the desire for love in a world that seems, more often than not, to withhold it.

Brandon Taylor is the author of the acclaimed novel Real Life, which has been shortlisted for the Booker Prize, longlisted for the Center for Fiction First Novel Prize, and named a New York Times Book Review Editors’ Choice. The senior editor of Electric Literature’s Recommended Reading and a staff writer at Lit Hub, he holds graduate degrees from the University of Wisconsin–Madison and the University of Iowa, where he was an Iowa Arts Fellow at the Iowa Writers’ Workshop in fiction.

Hari Kunzru is the author of six novels: White Tears, The Impressionist, Transmission, My Revolutions, and Gods Without Men, and most recently Red Pill. His work has been translated into twenty-one languages, and his short stories and journalism have appeared in many publications, including The New York Times, The Guardian, and The New Yorker. He is the recipient of fellowships from the Guggenheim Foundation, the New York Public Library, and the American Academy in Berlin. He lives in Brooklyn, New York.