Louis Chude-Sokei and Frank B. Wilderson III for FLOATING IN A MOST PECULIAR WAY 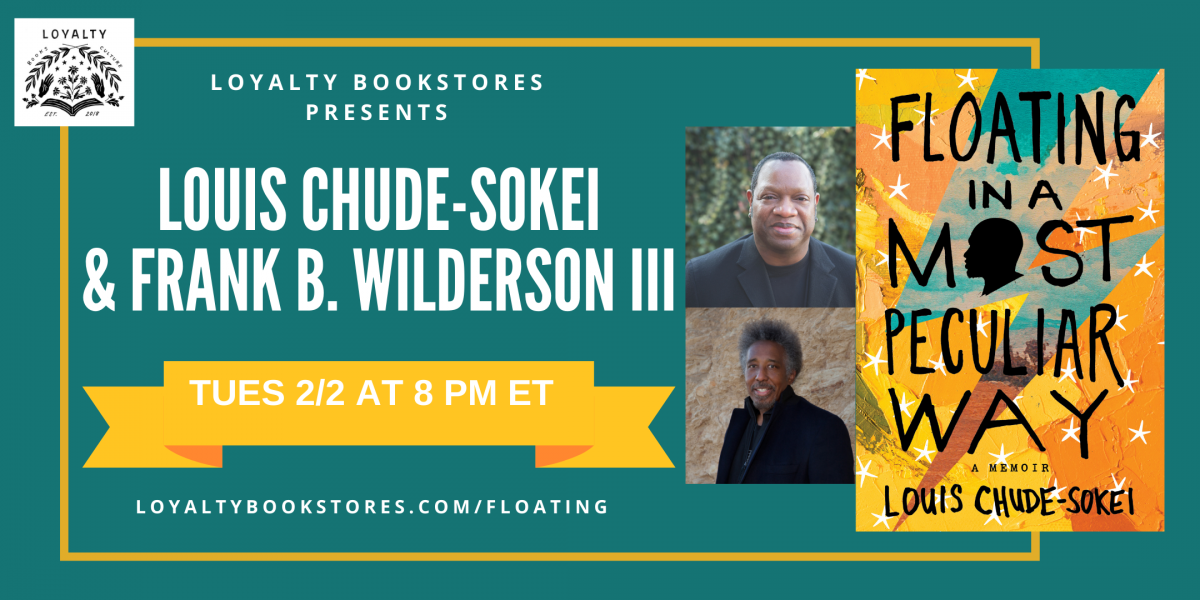 Join us in celebrating the release of Floating in a Most Peculiar Way with Louis Chude-Sokei and Frank B. Wilderson III. This event will be held digitally via Crowdcast. Click here to register for the event with a donation of any amount of your choice. Donations will go to Black Lives Matter DC. You can order the book below and there will also be an option to buy the book during the event. If you order the book from our website, you'll be automatically registered for the event as well!

"Chude-Sokei's Floating in a Most Peculiar Way is a rich, immersive coming-of-age tale from a man of eccentric, transnational upbringing. Chude-Sokei's honest and eloquent writing ultimately transforms his memoir into a superlative and unforgettable book.”
—Chigozie Obioma, author of The Fishermen and An Orchestra of Minorities (both finalist for the Booker prize)

The astonishing journey of a bright, utterly displaced boy, from the short-lived African nation of Biafra, to Jamaica, to the harshest streets of Los Angeles—a searing memoir that adds fascinating depth to the coming-to-America story.

The first time Chude-Sokei realizes that he is “first son of the first son” of a renowned leader of the bygone African nation is in Uncle Daddy and Big Auntie’s strict religious household in Jamaica, where he lives with other abandoned children. A visiting African has just fallen to his knees to shake him by the shoulders: “Is this the boy? Is this him?”

Chude-Sokei’s immersion in the politics of race and belonging across the landscape of the African diaspora takes a turn when his traumatized mother, who has her own extraordinary history as the onetime “Jackie O of Biafra,” finally sends for him to come live with her. In Inglewood, Los Angeles, on the eve of gangsta rap and the LA riots, it’s as if he’s fallen to Earth. In this world, anything alien—definitely Chude-Sokei’s secret obsession with science fiction and David Bowie—is a danger, and his yearning to become a Black American gets deeply, sometimes absurdly, complicated. Ultimately, it is a boisterous pan-African family of honorary aunts, uncles, and cousins that becomes his secret society, teaching him the redemptive skill of navigating not just Blackness, but Blacknesses, in his America.

Louis Chude-Sokei is a writer, scholar, and director of the African American studies program at Boston University. His writing on the African diaspora and other topics has appeared in national and international venues. He lives in Boston.

Frank B. Wilderson III is professor and chair of African American Studies, and a core faculty member of the Culture & Theory Ph.D. Program at UC Irvine; and an award-winning writer whose books include Incognegro:
A Memoir of Exile and Apartheid; and Red, White, &amp; Black: Cinema and the Structure of U.S. Antagonisms. He spent five and a half years in South Africa, where he was one of two Americans to hold elected office in the
African National Congress during the apartheid era. He also was a cadre in the underground. His literary awards include the Zora Neale Hurston/Richard Wright Legacy Award for Creative Nonfiction; The American Book Award; The Maya Angelou Award for Best Fiction Portraying the Black Experience in America; and a National Endowment for the Arts Literature Fellowship. Wilderson was educated at Dartmouth College (A.B Government and Philosophy.), Columbia University (MFA/Fiction Writing), and UC Berkeley (PhD/Rhetoric).

Floating in a Most Peculiar Way: A Memoir (Hardcover)