Gabrielle Union and Tarana Burke for YOU GOT ANYTHING STRONGER? * In-Person * 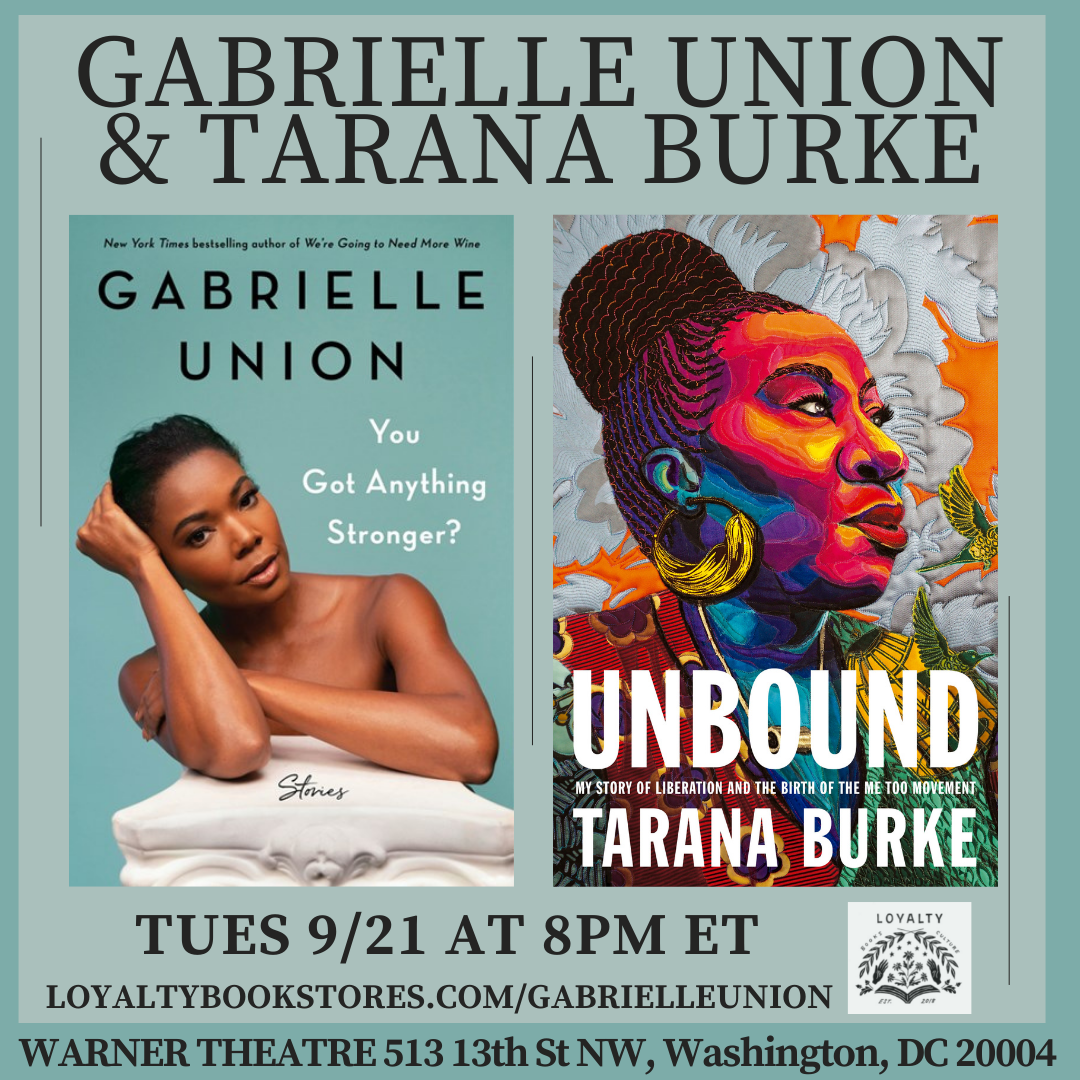 Loyalty is absolutely thrilled to be the bookstore partner for the celebration event of You Got Anything Stronger? by Gabrielle Union! Gabrielle Union will be in conversation with Tarana Burke! This is an in-person event taking place at Warner Theatre, located at 513 13th St NW, Washington, DC, 20004. CLICK HERE to get your ticket for the event. Each ticket comes with a copy of the book You Got Anything Stronger? Additional copies of this book and Gabrielle Union's other books will be available for purchase at the event.

Face coverings are required, unless actively eating or drinking.

“Funny, tender, and so good.” —Mindy Kaling, #1 New York Times bestselling author of Why Not Me?

Remember when we hit it off so well that we decided We’re Going to Need More Wine? Well, this time you and I are going to turn to our friend the bartender and ask, You Got Anything Stronger? I promise to continue to make you laugh, but with this round, the stakes get higher as the conversation goes deeper.

So. Where were we?

Right, you and I left off in October 2017, when my first book came out. The weeks before were filled with dreams of loss. Pets dying. My husband leaving me. Babies not being born. My therapist told me it was my soul preparing for my true self to emerge after letting go of my grief. I had finally spoken openly about my fertility journey. I was having second thoughts—in fact, so many thoughts they were organizing to go on strike. But I knew I had to be honest because I didn’t want other women going through IVF to feel as alone as I did. I had suffered in isolation, having so many miscarriages that I could not give an exact number. Strangers shared their own journeys and heartbreak with me. I had led with the truth, and it opened the door to compassion.

When I released We’re Going to Need More Wine, the response was so great people asked when I would do a sequel. The New York Times even ran a headline reading “We’re Going to Need More Gabrielle Union.” Frankly, after being so open and honest in my writing, I wasn’t sure there was more of me I was ready to share. But life happens with all its plot twists. And new stories demand to be told. This time, I need to be more vulnerable—not so much for me, but anyone who feels alone in what they’re going through.

A lot has changed in four years—I became a mom and I’m raising two amazing girls. My husband retired. My career has expanded so that I have the opportunity to lift up other voices that need to be heard. But the world has also shown us that we have a lot we still have to fight for—as women, as black women, as mothers, as aging women, as human beings, as friends. In You Got Anything Stronger?, I show you how this ever-changing life presents challenges, even as it gives me moments of pure joy. I take you on a girl’s night at Chateau Marmont, and I also talk to Isis, my character from Bring It On. For the first time, I truly open up about my surrogacy journey and the birth of Kaavia James Union Wade. And I take on racist institutions and practices in the entertainment industry, asking for equality and real accountability.

You Got Anything Stronger? is me at my most vulnerable. I have recently found true strength in that vulnerability, and I want to share that power with you here, through this book.

Gabrielle Union is an actress, executive producer, activist, best-selling author and most recently, a Time100 cover honoree. Union formed her production shingle “I’ll Have Another” in 2018 with the goal of telling stories that center marginalized communities with their specific point of views in an authentic manner. In August of 2020, she relaunched her haircare brand “Flawless by Gabrielle Union” for women with textured hair. The new and improved collection includes an array of options, affordably priced between $4 - $10, that empowers consumers to customize a regimen specific to their texture and style preferences. Prior to relaunching Flawless, Union learned of the disparities in the food space and joined Bitsy's as a cofounder with the goal of making healthy, allergen- friendly, school-safe snacks that are accessible and affordable for all families regardless of their socioeconomic or geographical status. Her first book, We’re Going To Need More Wine: Stories That Are Funny, Complicated and True, was released in 2017 and instantly became a New York Times best seller. Union serves as a leader and advocate for inclusion in the entertainment industry. She is also a champion of breast health and combating sexual violence.

Tarana Burke has always been struck by a commitment to justice and equity. As the founder of the 'me too' movement and subsequent nonprofit, Burke works to dismantle the cycle of sexual violence and other systemic issues that disproportionately impact marginalized people. Tarana's passion for community organizing began in the late 1980s, when as a young girl she joined a youth development organization called 21st Century. Since then she has launched initiatives around issues of racial discrimination, housing inequality, and economic justice. Her work has connected a vast network of influential people, including much of Hollywood, the founder of the Women's March Tamika Mallory, leading intellectuals and authors like Ishmael Beah and Gloria Steinem. She was 2017 TIME Person of the Year and the winner of the 2019 Sydney Peace Prize, and has been the recipient of countless other accolades. She is the co-editor with Brené Brown of the instant New York Times bestseller You Are Your Best Thing.

You Got Anything Stronger?: Stories (Hardcover)

Welcome to the Party (Hardcover)

Welcome to the Party Board Book (Board book)

Unbound: My Story of Liberation and the Birth of the Me Too Movement (Hardcover)

You Are Your Best Thing: Vulnerability, Shame Resilience, and the Black Experience (Hardcover)