Author Chat in Celebration of EMPIRE OF GOLD 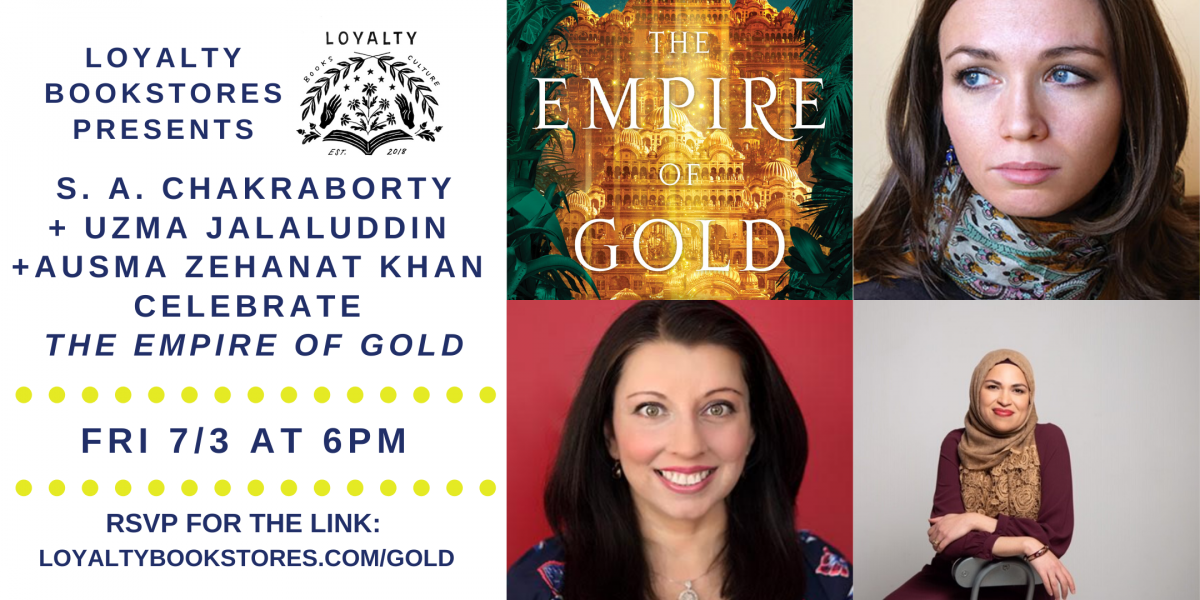 Join us for a chat with three brilliant authors in celebration of the final book in the Daevabad Trilogy! This event is free, but RSVP via the ticket link below!

The final chapter in the bestselling, critically acclaimed Daevabad Trilogy, in which a con-woman and an idealistic djinn prince join forces to save a magical kingdom from a devastating civil war.

After a brutal conquest stripped the city of its magic, Nahid leader Banu Manizheh and her resurrected commander, Dara, must try to repair their fraying alliance and stabilize a fractious, warring people.

But the bloodletting and loss of his beloved Nahri have unleashed the worst demons of Dara's dark past. To vanquish them, he must face some ugly truths about his history and put himself at the mercy of those he once considered enemies.

Having narrowly escaped their murderous families and Daevabad's deadly politics, Nahri and Ali, now safe in Cairo, face difficult choices of their own. While Nahri finds peace in the old rhythms and familiar comforts of her human home, she is haunted by the knowledge that the loved ones she left behind and the people who considered her a savior are at the mercy of a new tyrant. Ali, too, cannot help but look back, and is determined to return to rescue his city and the family that remains. Seeking support in his mother's homeland, he discovers that his connection to the marid goes far deeper than expected and threatens not only his relationship with Nahri, but his very faith.

As peace grows more elusive and old players return, Nahri, Ali, and Dara come to understand that in order to remake the world, they may need to fight those they once loved . . . and take a stand for those they once hurt.

S. A. Chakraborty is the author of the critically acclaimed and internationally best-selling The Daevabad Trilogy. Her work has been nominated for the Locus, World Fantasy, Crawford, and Astounding awards. When not buried in books about thirteen-century con artists and Abbasid political intrigue, she enjoys hiking, knitting, and re-creating unnecessarily complicated medieval meals. You can find her online at www.sachakraborty.com or on Twitter and Instagram at @SAChakrabooks, where she likes to talk about history, politics, and Islamic art. She lives in New Jersey with her husband, daughter, and an ever-increasing number of cats.

ABOUT OUR IN CONVO PARTNERS

Uzma Jalaluddin is a teacher and also writes a funny parenting column named “Samosas and Maple Syrup’ for the Toronto Star, Canada’s largest daily newspaper. Her debut novel is Ayesha at Last. Learn more at www.uzmajalaluddin.com and find her at @UzmaWrites on Twitter.

Ausma Zehanat Khan holds a Ph.D. in international human rights law with a specialization in military intervention and war crimes in the Balkans. She is a former adjunct law professor and Editor-in-Chief of Muslim Girl magazine, the first magazine targeted to young Muslim women in North America. She is also the award-winning author of The Unquiet Dead and The Bloodprint, the first book in The Khorasan Archives. A British-born Canadian, Khan now lives in Colorado with her husband.

The Empire of Gold: A Novel (The Daevabad Trilogy #3) (Hardcover)

The Kingdom of Copper: A Novel (The Daevabad Trilogy #2) (Paperback)

The City of Brass: A Novel (The Daevabad Trilogy) (Paperback)

The Bloodprint: Book One of the Khorasan Archives (Paperback)