Roseanne A. Brown & Tochi Onyebuchi w/ Justin A. Reynolds for INTO THE HEARTLANDS 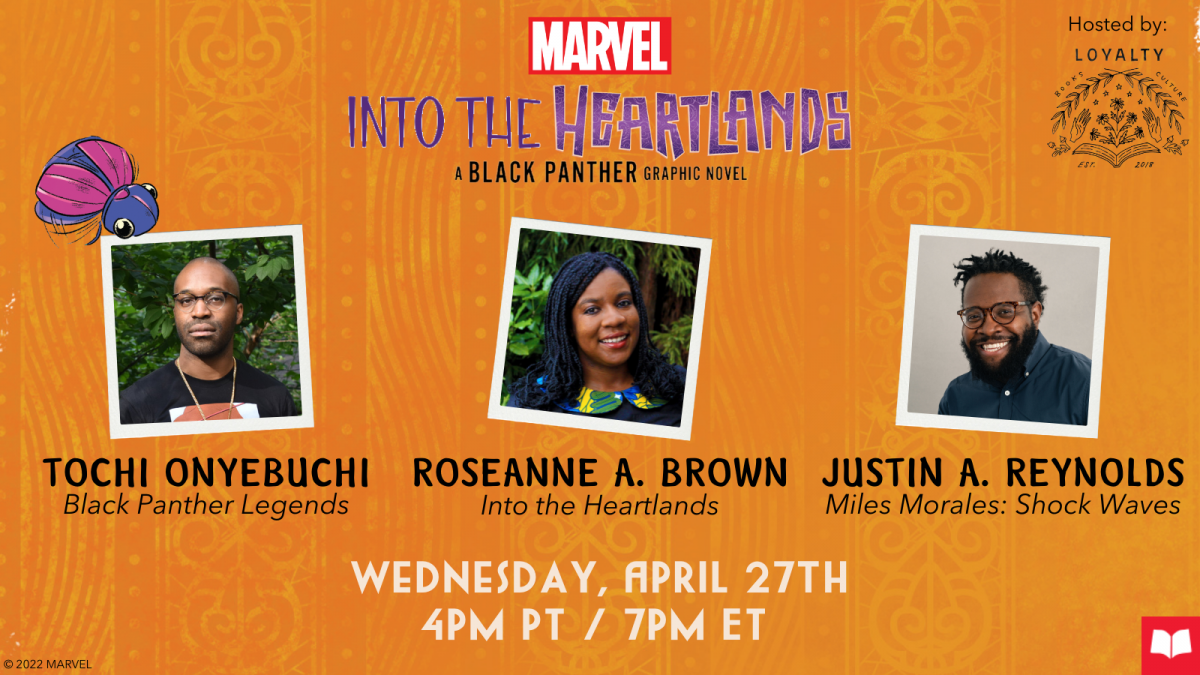 Loyalty cannot WAIT to host Roseanne A. Brown and Tochi Onyebuchi for a virtual convo all about Into the Heartlands: A Black Panther Graphic Novel, moderated by Justin A. Reynolds! This event is free to attend and will be held digitally via Crowdcast. Click here to register for the event. You can also order a copy of the book below to be automatically added to the registration list, and there will be an option to snag the book during the event.

Shuri and T'Challa set out to remove a curse from Wakanda in this action-packed, totally original graphic novel!

Twelve-year-old Shuri is a lot of things. Scientist. Princess. All around cooler person than her pain-in-the-butt big brother, T’Challa. Shuri knows she could do so much more to help Wakanda, but everyone is obsessed with the prince because he’s the next Black Panther. That is, until Soul Washing Day, one of the most important rituals of Wakandan society.

When an argument between T’Challa and Shuri leads to one of Shuri’s inventions accidentally destroying the sacred ceremony site, chaos reigns instead of prosperity. Suddenly the people of Wakanda, including her mother the queen, are becoming sick! Could this be a curse from the ancestors? Desperate to save her mother, Shuri dives into research and finds an answer hidden deep in an ancient children's myth. It may be nothing more than a fantasy, but with the sickness spreading each day, the young princess must trust her instincts and travel deep into the mysterious Heartlands to save her family and her kingdom.

Joining Shuri on her journey is none other than a meddling T’Challa. If Shuri and T’Challa can set aside their jealousy and resentment of each other long enough to survive this journey, they might just discover that they are far more powerful together than they could ever be apart. But if they can’t face their fears in the Heartlands and lift the so-called curse, it may not be just the end for their family, but the end of Wakanda as they know it. No pressure, right?

Roseanne A. Brown was born in Kumasi, Ghana and immigrated to the wild jungles of central Maryland as a child. She graduated from the University of Maryland with a Bachelor’s in Journalism and was also a teaching assistant for the school’s Jiménez-Porter Writers’ House program. Her journalistic work has been featured by Voice of America among other outlets. Rosie currently lives outside Washington D.C., where in her free time she can usually be found wandering the woods, making memes, or thinking about Star Wars. Her debut novel, A Song of Wraith and Ruin, was a New York Times bestseller.

Dika Araújo is a Brazilian animator, comic artist and illustrator based in Sâo Paulo. Her previous work includes several independent Brazilian anthologies, including Amor em Quadrinhos, which was nominated for the Angouleme International Comics Award in 2018.

Claudia Aguirre is a GLAAD and Eisner Award nominated artist and writer. She is co-founder of Boudika Comics. Her works include Hotel Dare (Boom!Studios), Morning in America (Oni Press) and Lost on PlanetEarth (Comixology Originals).

Natacha Bustos is a Spanish comic book artist who drew the story Going Nowhere, written by Brandan Montclare, for DC/Vertigo's Strange Sports Stories. Bustos then made her Marvel Comics debut on Spider Woman before re-teaming with Montclare and co-writer Amy Reeder on the inaugural run of Moon Girl & Devil Dinosaur, winner of Glyph Award for Best Female Character in 2016. In 2020, she drew the Buffy the Vampire: Willow miniseries (BOOM Studios!) and became part of Marvel's Stormbreakers Artist program, dedicated to spotlighting the next generation of elite artists.

Tochi Onyebuchi is the author of Goliath. His previous fiction includes Riot Baby, a finalist for the Hugo, Nebula, Locus, and NAACP Image Awards and winner of the New England Book Award for Fiction, the Ignyte Award for Best Novella, and the World Fantasy Award; the Beasts Made of Night series; and the War Girls series. His short fiction has appeared in The Best American Science-Fiction and elsewhere. His non-fiction includes the book (S)kinfolk and has appeared in The New York Times, NPR, and the Harvard Journal of African American Public Policy, among other places.

Justin A. Reynolds has always wanted to be a writer. Opposite of Always, his debut novel, was an Indies Introduce selection, a School Library Journal Best Book, has been translated in 17 languages, and is being developed for film with Paramount Players. He hangs out in northeast Ohio with his family and likes it, and is probably somewhere, right now, dancing terribly. His second novel, Early Departures, published September 2020, and he wrote an original Spider-Man graphic novel, Miles Morales: Shock Waves, that published in June 2021. You can find him at justinareynolds.com.

Shuri and T'Challa: Into the Heartlands (An Original Black Panther Graphic Novel) (Paperback)

Shuri and T'Challa: Into the Heartlands (An Original Black Panther Graphic Novel) (Hardcover)