Vanessa A. Bee and Nicole Chung for HOME BOUND 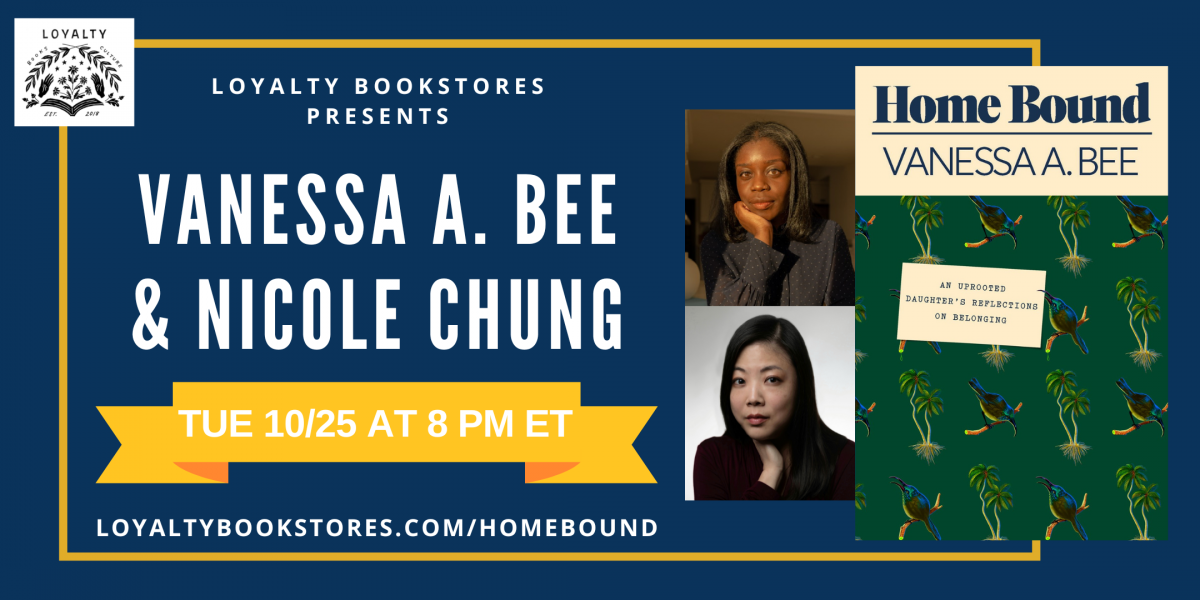 Loyalty is overjoyed to host Vanessa A. Bee and Nicole Chung for a virtual event celebrating Home Bound: An Uprooted Daughter's Reflections on Belonging! This event will be held digitally via Crowdcast. Click here to register for the event with a donation of any amount of your choice. You can also order the book below to be automatically added to the event's registration list. Donations will go to the DC Abortion Fund. There will also be an option to snag the book during the event.

"What emerges is a rich and enthralling story of finding oneself outside of the bounds of borders and beliefs. This offers radiant hope in the face of darkness." —Publishers Weekly, starred review

"Bee’s lyrical, emotive prose takes readers through her life with an intimacy that draws and keeps them close. . . . [Home Bound will] appeal to a variety of reader, challenging singular beliefs of what it means to be a daughter, sister, lover, wife, lawyer, and mother." —Library Journal, starred review

In this singular and intimate memoir of identity and discovery, Vanessa A. Bee explores the way we define “home” and “belonging” — from her birth in Yaoundé, Cameroon, to her adoption by her aunt and her aunt’s white French husband, to experiencing housing insecurity in Europe and her eventual immigration to the US. After her parents’ divorce, Vanessa traveled with her mother to Lyon and later to London, eventually settling in Reno, Nevada, as a teenager, right around the financial crisis and the collapse of the housing market. At twenty, still a practicing evangelical Christian and newly married, Vanessa applied to and was accepted by Harvard Law School, where she was one of the youngest members of her class. There, she forged a new belief system, divorced her husband, left the church, and, inspired by her tumultuous childhood, pursued a career in economic justice upon graduation.

Vanessa’s adoptive, multiracial, multilingual, multinational, and transcontinental upbringing has caused her to grapple for years with foundational questions such as: What is home? Is it the country we’re born in, the body we possess, or the name we were given and that identifies us? Is it the house we remember most fondly, the social status assigned to us, or the ideology we forge? What defines us and makes us uniquely who we are?

Organized unconventionally around her own dictionary-style definitions of the word “home,” Vanessa tackles these timeless questions thematically and unpacks the many layers that contribute to and condition our understanding of ourselves and of our place in the world.

Vanessa A. Bee is a consumer protection lawyer and essayist. Born in Cameroon, she grew up in France, England, and the United States. Vanessa holds an undergraduate degree from the University of Nevada and a law degree from Harvard. She lives in Washington, DC. Follow @Vanessa_ABee on Twitter and @TheHomeBoundBook on Instagram.

Nicole Chung is the author of the national bestseller All You Can Ever Know (Catapult, 2018). Named a Best Book of the Year by NPR, The Washington Post, The Boston Globe, Time, Library Journal, and many other outlets, All You Can Ever Know was a finalist for the National Book Critics Circle Award, a semifinalist for the PEN Open Book Award, and an Indies Choice Honor Book. Chung's writing has appeared in numerous publications, including The New York Times, The New York Times Magazine, GQ, Time, The Guardian, Slate, and Vulture. Her next book, A Living Remedy, will be published by Ecco Books/HarperCollins in April 2023 (and you can get a signed & personalized copy from Loyalty!).

A Living Remedy: A Memoir (Hardcover)