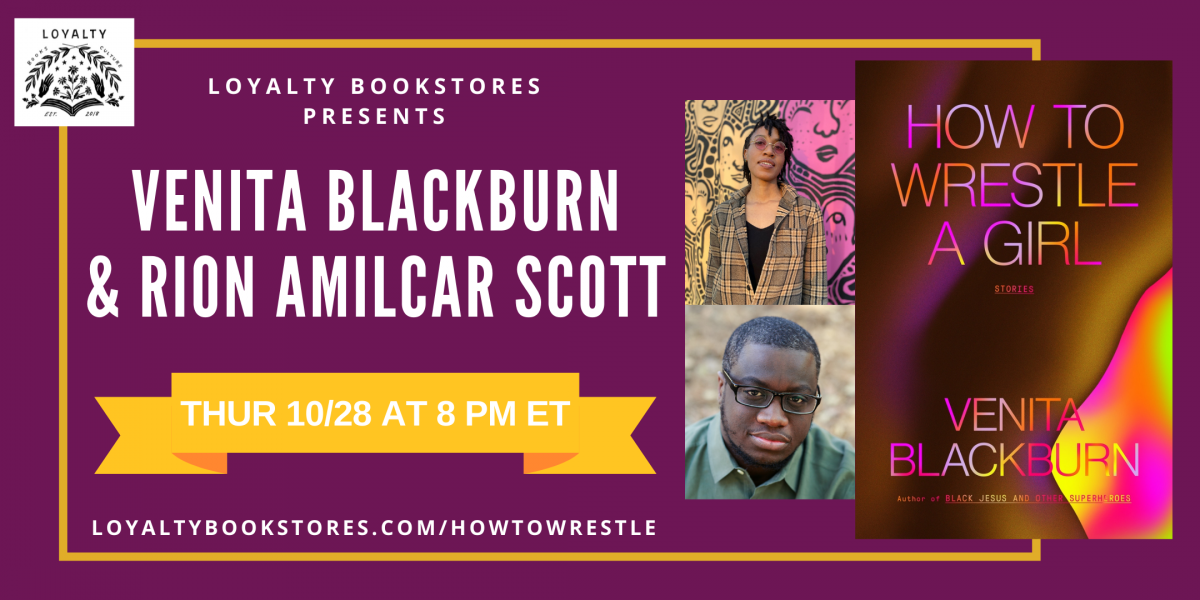 Loyalty is thrilled to celebrate How to Wrestle a Girl: Stories with Venita Blackburn and Rion Amilcar Scott! This event will be held digitally via Crowdcast. Click here to register for the event with a donation of any amount of your choice or you can order the book below to be added to the event's registration list. Donations will go to BLM DC. There will also be an option to snag the book during the event.

"Bold, witty, ominous and vulnerable . . . How to Wrestle a Girl shines in its propensity to magnify small moments, challenge our presumptions and dissect the beauty, danger and wonder of girlhood." --The New York Times Book Review

Hilarious, tough, and tender stories from a farseeing star on the rise.

Venita Blackburn’s characters bully and suffer, spit and tease, mope and blame. They’re hyperaware of their bodies and fiercely observant, fending off the failures and advances of adults with indifferent ease. In “Biology Class,” they torment a teacher to the point of near insanity, while in “Bear Bear Harvest™,” they prepare to sell their excess fat and skin for food processing. Stark and sharp, hilarious and ominous, these pieces are scabbed, bruised, and prone to scarring.

Many of the stories, set in Southern California, follow a teenage girl in the aftermath of her beloved father’s death and capture her sister’s and mother’s encounters with men of all ages, as well as the girl’s budding attraction to her best friend, Esperanza. In and out of school, participating in wrestling and softball, attending church with her hysterically complicated family, and dominating boys in arm wrestling, she grapples with her burgeoning queerness and her emerging body, becoming wary of clarity rather than hoping for it.

A rising star, Blackburn is a trailblazing stylist, and in How to Wrestle a Girl she masterfully shakes loose a vision of girlhood that is raw, vulnerable, and never at ease.

Works by Venita Blackburn have appeared in newyorker.com, Harper’s, Story, McSweeney’s, Apogee, Split Lip Magazine, the Iowa Review, DIAGRAM, Foglifter, Electric Literature, the Virginia Quarterly Review, the Paris Review, and others. She was awarded a Bread Loaf Fellowship in 2014 and several Pushcart prize nominations. She received the Prairie Schooner book prize for fiction, which resulted in the publication of her collected stories, Black Jesus and Other Superheroes, in 2017. In 2018 she earned a place as a finalist for the PEN/Bingham award for debut fiction, finalist for the NYPL Young Lions award and recipient of the PEN America Los Angeles literary prize in fiction. Her next collection of stories, HOW TO WRESTLE A GIRL, was published in the fall of 2021 by MCD books.  She is the founder and president of Live, Write (livewriteworkshop.com), an organization devoted to offering free creative writing workshops for communities of color. Her home town is Compton, California, and she is an Assistant Professor of creative writing at California State University, Fresno.

Rion Amilcar Scott's first book, Insurrections, won the PEN/Robert W. Bingham Prize for Debut Fiction. His work has been published in the Kenyon Review, the Rumpus, PANK, and Confrontation, among others. He lives and writes in Maryland.

How to Wrestle a Girl: Stories (Paperback)