Will Jawando and Clint Smith for MY SEVEN BLACK FATHERS *IN-PERSON!* 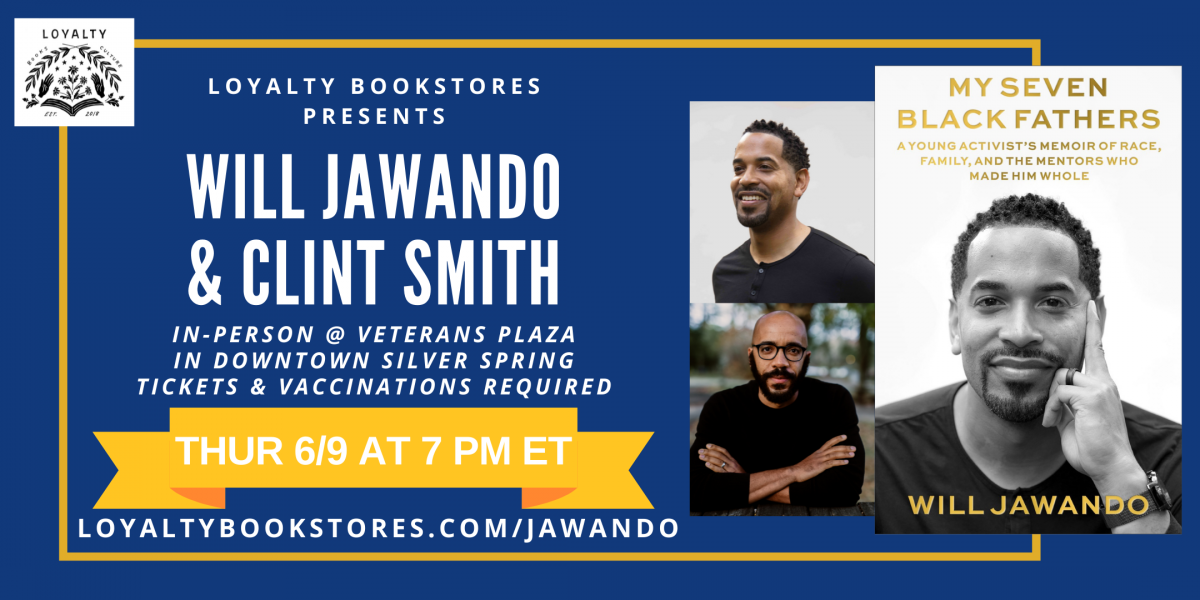 Loyalty is delighted to welcome Will Jawando in conversation with Clint Smith for a live, in-person celebration of My Seven Black Fathers: A Young Activist's Memoir of Race, Family, and the Mentors Who Made Him Whole! This event will be held at Veterans Plaza in Downtown Silver Spring. This is a ticketed event and proof of vaccination is required. There are two ticket options: one option includes a SIGNED copy of My Seven Black Fathers and a guaranteed seat at the event, and the other is a free general admission ticket that does not include a copy of the book or a guaranteed seat. Additional copies of the book will be available for purchase at the event. Please select your ticket option below, and email events@loyaltybookstores.com with any questions.

"Will Jawando's account of mentorship, service, and healing lays waste to the racist stereotype of the absent Black father. By arguing that Black fathers are not just found in individual families, but are indeed the treasure of entire Black communities, Will makes the case for a bold idea: that Black men can counter racist ideas and policies by virtue of their presence in the lives of Black boys and young men. This is a story we need to hear." —Ibram X. Kendi, New York Times–bestselling author of How to be an Antiracist

Will Jawando tells a deeply affirmative story of hope and respect for men of color at a time when Black men are routinely stigmatized. As a boy growing up outside DC, Will, who went by his Nigerian name, Yemi, was shunted from school to school, never quite fitting in. He was a Black kid with a divorced white mother, a frayed relationship with his biological father, and teachers who scolded him for being disruptive in class and on the playground. Eventually, he became close to Kalfani, a kid he looked up to on the basketball court. Years after he got the call telling him that Kalfani was dead, another sickening casualty of gun violence, Will looks back on the relationships with an extraordinary series of mentors that enabled him to thrive.

Among them were Mr. Williams, the rare Black male grade school teacher, who found a way to bolster Will’s self-esteem when he discovered he was being bullied; Jay Fletcher, the openly gay colleague of his mother who got him off junk food and took him to his first play; Mr. Holmes, the high school coach and chorus director who saw him through a crushing disappointment; Deen Sanwoola, the businessman who helped him bridge the gap between his American upbringing and his Nigerian heritage, eventually leading to a dramatic reconciliation with his biological father; and President Barack Obama, who made Will his associate director of public engagement at the White House—and who invited him to play basketball on more than one occasion. Without the influence of these men, Will knows he would not be who he is today: a civil rights and education policy attorney, a civic leader, a husband, and a father.

Will Jawando is an attorney, an activist, a community leader, and a councilmember in Montgomery County, Maryland, a diverse community of more than one million residents. Called “the progressive leader we need” by the late congressman John Lewis, Jawando has worked with Speaker Nancy Pelosi, Senator Sherrod Brown, and President Barack Obama. His writing has appeared in The Washington Post and The Root and on BET.com, and his work has been featured in The New York Times and New York magazine and on NPR, NBC News, and MTV. He regularly appears on CNN, MSNBC and other media outlets.

Clint Smith is a staff writer at The Atlantic. He is the author of the narrative nonfiction book, How the Word Is Passed: A Reckoning With the History of Slavery Across America, which was a #1 New York Times bestseller and one of the New York Times Top Ten Books of 2021. He is also the author of the poetry collection Counting Descent. The book won the 2017 Literary Award for Best Poetry Book from the Black Caucus of the American Library Association and was a finalist for an NAACP Image Award. He has received fellowships from New America, the Emerson Collective, the Art For Justice Fund, Cave Canem, and the National Science Foundation. His writing has been published in The New Yorker, The New York Times Magazine, Poetry Magazine, The Paris Review and elsewhere. Born and raised in New Orleans, he received his B.A. in English from Davidson College and his Ph.D. in Education from Harvard University.

My Seven Black Fathers: A Young Activist's Memoir of Race, Family, and the Mentors Who Made Him Whole (Hardcover)