Weike Wang and Angie Kim for JOAN IS OKAY 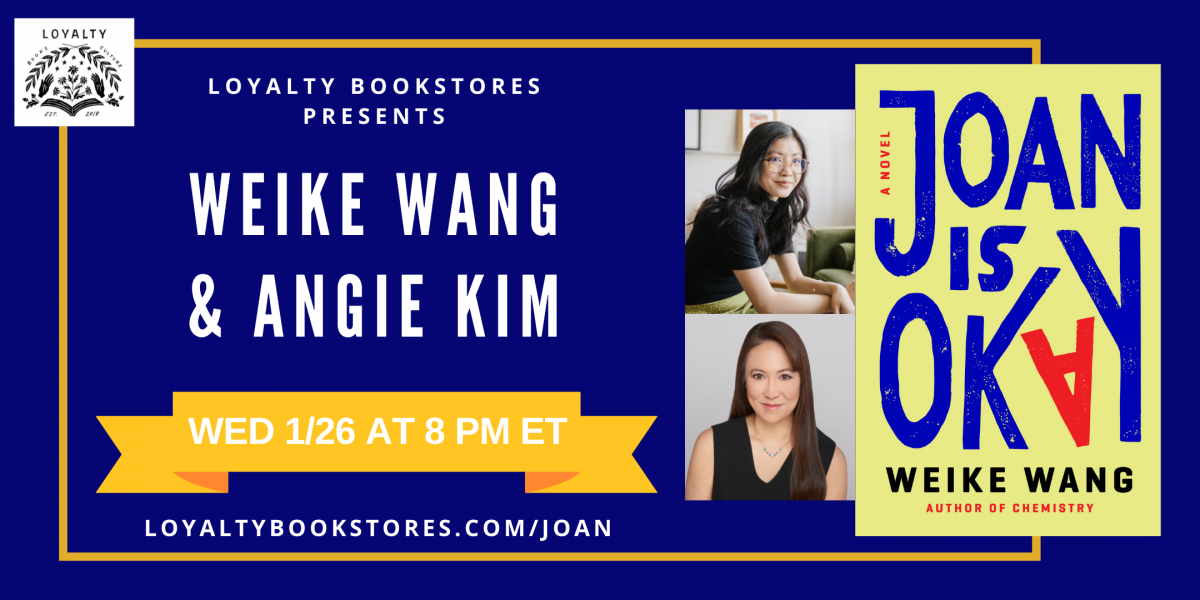 Loyalty is super psyched to celebrate the release of Joan Is Okay with Weike Wang and Angie Kim! This event will be held digitally via Crowdcast. Click here to register for the event with a donation of any amount of your choice or you can order the book below to be added to the event's registration list. Donations will go to Stop AAPI Hate. There will also be an option to snag the book during the event.

A witty, moving, piercingly insightful new novel about a marvelously complicated woman who can’t be anyone but herself, from the award-winning author of Chemistry

“A deeply felt portrait . . . With gimlet-eyed observation laced with darkly biting wit, Weike Wang masterfully probes the existential uncertainty of being other in America.”—Celeste Ng, author of Little Fires Everywhere

Joan is a thirtysomething ICU doctor at a busy New York City hospital. The daughter of Chinese parents who came to the United States to secure the American dream for their children, Joan is intensely devoted to her work, happily solitary, successful. She does look up sometimes and wonder where her true roots lie: at the hospital, where her white coat makes her feel needed, or with her family, who try to shape her life by their own cultural and social expectations.

Once Joan and her brother, Fang, were established in their careers, her parents moved back to China, hoping to spend the rest of their lives in their homeland. But when Joan’s father suddenly dies and her mother returns to America to reconnect with her children, a series of events sends Joan spiraling out of her comfort zone just as her hospital, her city, and the world are forced to reckon with a health crisis more devastating than anyone could have imagined.

Deceptively spare yet quietly powerful, laced with sharp humor, Joan Is Okay touches on matters that feel deeply resonant: being Chinese-American right now; working in medicine at a high-stakes time; finding one’s voice within a dominant culture; being a woman in a male-dominated workplace; and staying independent within a tight-knit family. But above all, it’s a portrait of one remarkable woman so surprising that you can’t get her out of your head.

Weike Wang was born in Nanjing, China, and grew up in Australia, Canada, and the United States. She is a graduate of Harvard University, where she earned her undergraduate degree in chemistry and her doctorate in public health. Her first novel, Chemistry, received the PEN/ Hemingway Award for Debut Fiction, the Ploughshares John C. Zacharis First Book Award, and a Whiting Award. She is a “5 Under 35” honoree of the National Book Foundation and her work has appeared in The New Yorker. She currently lives in New York City.

Angie Kim is the debut author of the international bestseller and Edgar winner Miracle Creek, named a “Best Book of the Year” by Time, The Washington Post, Kirkus, and The Today Show, among others. Her novel also won the ITW Thriller Award, the Strand Critics’ Award, and the Pinckley Prize. A Korean immigrant, former editor of the Harvard Law Review, and one of Variety Magazine’s inaugural “10 Storytellers to Watch,” Kim has written for Vogue, The New York Times Book Review, The Washington Post, Glamour, and numerous literary journals. She lives in Northern Virginia with her husband and three sons.

Joan Is Okay: A Novel (Hardcover)