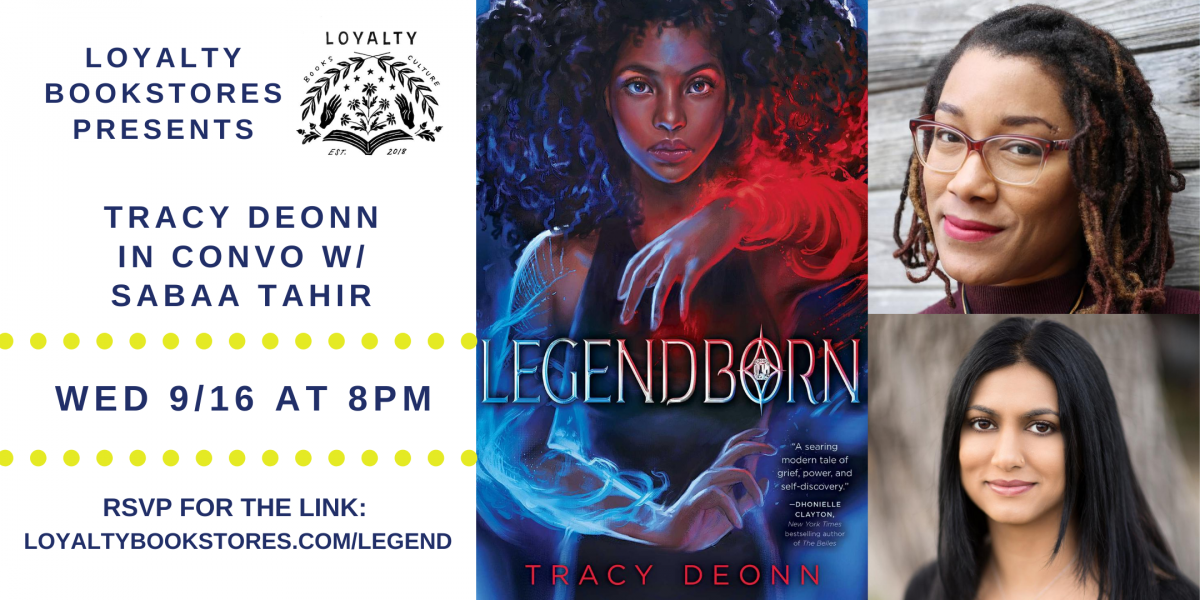 Celebrate the release of Legendborn with debut author Tracy Deonn and bestselling author Sabaa Tahir!! Loyalty's staff is OBSESSED with Legendborn and we can't wait for y'all to read it! This event will be held digitally via Crowdcast. Click here to register for the event with a donation of any amount of your choice or by purchasing the book below. Donations will go to Black Lives Matter DC. If you order the book below, we will send you a follow up email with the registration info. There will also be an option to buy the book during the event.

LEGENDBORN is the first selection in Loyalty Bookstore's new Quarterly Subscription Box that celebrates a new book from an emerging writer and celebrates that book with all of our might! For more info and to purchase a Loyalty Leap of Faith box, click here.

Filled with mystery and an intriguingly rich magic system, Tracy Deonn’s YA contemporary fantasy Legendborn offers the dark allure of City of Bones with a modern-day twist on a classic legend and a lot of Southern Black Girl Magic.

After her mother dies in an accident, sixteen-year-old Bree Matthews wants nothing to do with her family memories or childhood home. A residential program for bright high schoolers at UNC–Chapel Hill seems like the perfect escape—until Bree witnesses a magical attack her very first night on campus. A flying demon feeding on human energies. A secret society of so called “Legendborn” students that hunt the creatures down. And a mysterious teenage mage who calls himself a “Merlin” and who attempts—and fails—to wipe Bree’s memory of everything she saw.

The mage’s failure unlocks Bree’s own unique magic and a buried memory with a hidden connection: the night her mother died, another Merlin was at the hospital. Now that Bree knows there’s more to her mother’s death than what’s on the police report, she’ll do whatever it takes to find out the truth, even if that means infiltrating the Legendborn as one of their initiates.

She recruits Nick, a self-exiled Legendborn with his own grudge against the group, and their reluctant partnership pulls them deeper into the society’s secrets—and closer to each other. But when the Legendborn reveal themselves as the descendants of King Arthur’s knights and explain that a magical war is coming, Bree has to decide how far she’ll go for the truth and whether she should use her magic to take the society down—or join the fight.

Tracy Deonn is a writer and second-generation fangirl. She grew up in central North Carolina, where she devoured fantasy books and Southern food in equal measure. After earning her master's degree in communication and performance studies from the University of North Carolina at Chapel Hill, Tracy worked in live theater, video game production, and K–12 education. When she’s not writing, Tracy speaks on panels at science fiction and fantasy conventions, reads fanfic, arranges puppy playdates, and keeps an eye out for ginger-flavored everything. She can be found on Twitter at @TracyDeonn and at TracyDeonn.com.

Sabaa Tahir is the #1 New York Times bestselling author of the AN EMBER IN THE ASHES SERIES, which has been translated into more than 35 languages. Sabaa grew up in California's Mojave Desert at her family's eighteen-room motel. There, she spent her time devouring fantasy novels, raiding her brother's comic book stash, and playing guitar badly. She began writing An Ember in the Ashes while working nights as a newspaper editor. She likes thunderous indie rock, garish socks, and all things nerd. Sabaa currently lives in the San Francisco Bay Area.