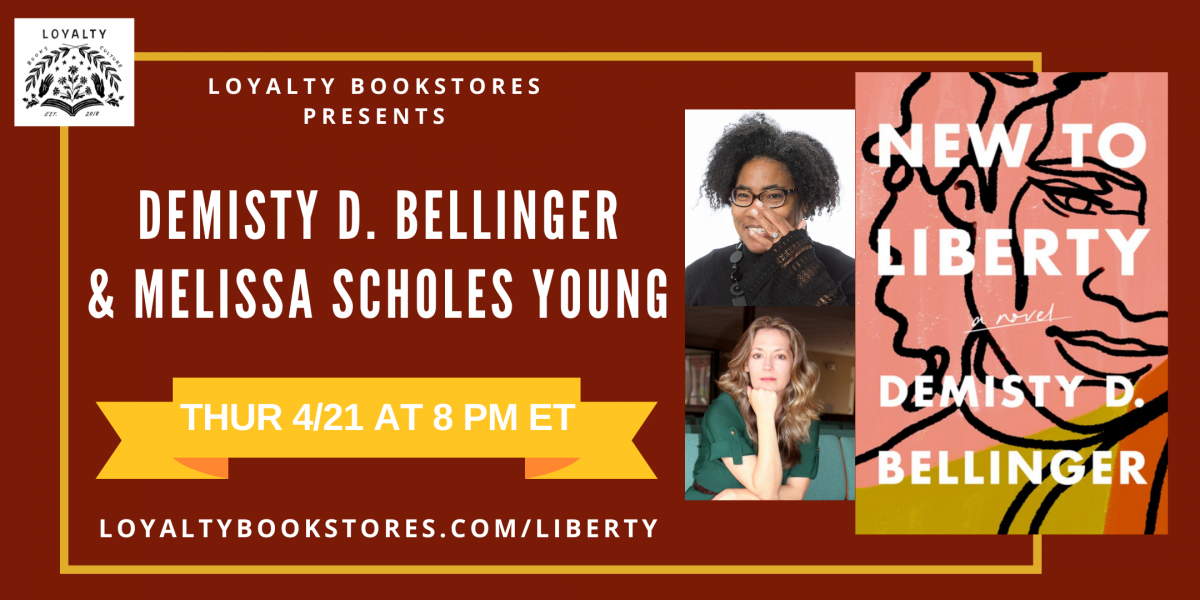 Loyalty is so excited to host DeMisty D. Bellinger and Melissa Scholes Young for New to Liberty! This event will be held digitally via Crowdcast. Click here to register for the event with a donation of any amount of your choice. You can also order the book below to be added to the event's registration list. Donations will go to BLM DC. There will also be an option to snag the book during the event.

"New to Liberty is a marvel. I was enraptured by DeMisty Bellinger's portrait of a gothic, gritty countryside. This atmospheric novel traces, with great sincerity, sensitivity, and crystal-clear prose, the dynamics of love and courtship, even as it explores lives lived in the haunting aftermath of violence. Bellinger's is a major, exciting new voice in fiction." --Timothy Schaffert, author of The Perfume Thief

Three women, decades apart from each other, fight for love and agency in a rural Kansas community seemingly frozen in time:

1966: Sissily is driving cross-country with a much older man called Ezzy. On their way to California to begin a life together, he insists on stopping at his family ranch outside Liberty, Kansas visit his mother, Mrs. Svoboda. This family reunion is a painful reminder for Sissily of the rumors about the scandal that led to her running away from home, but while Mrs. Svoboda is a domineering figure, Sissily sees a woman who harbors secrets of her own.

1947: Nella's family relocates to Liberty from Milwaukee, and during the summer before her senior year, begins an interracial relationship with a white man called Lucky. They can only meet in secret, or as Lucky is in a wheelchair sometimes Nella pretends to be his nurse. When three white men stumble upon "Nurse Nella" one catastrophic afternoon, the violence of a racist society forces Nella to face the harsh reality of her love affair.

1933: Greta finds love with a woman from the neighboring farm during the height of the Dust Bowl and brutal jackrabbit roundups. Surrounded by violence and starvation, their clandestine encounters are unsustainable, and yet the implications of their relationship will find a way to endure for generations.

A novel told in three parts, New to Liberty showcases the growth and strength of three unforgettable women as they evolve in a society that refuses to. In lustrous prose, DeMisty Bellinger brings the quiet but treacherous landscape to life, offering a vivid snapshot of mid-century America and keeping readers guessing until the end as to how these three women are connected.

DeMisty D. Bellinger has an MFA in creative writing from Southampton College and a PhD in English from the University of Nebraska. She teaches creative writing at Fitchburg State University in Massachusetts. She serves as poetry editor at Porcupine Literary and Malarkey Books. DeMisty's writing has appeared in many journals and anthologies, including The Rumpus and The Best Small Fictions: 2019. She is the author of the chapbook of poems Rubbing Elbows and a full-length poetry collection, Peculiar Heritage. New to Liberty is her debut novel.

Melissa Scholes Young is the author of the novels The Hive and Flood and editor of Grace in Darkness and Furious Gravity, two anthologies by women writers. Her work has appeared in the Atlantic, Ms., Washington Post, Poets & Writers, Ploughshares, Literary Hub, and Believer Magazine. She has been the recipient of fellowships from the Bread Loaf Bakeless Camargo Foundation, the Center for Mark Twain Studies, and the Virginia Center for Creative Arts. Born and raised in Hannibal, Missouri, she is an associate professor in Literature at American University.