Hanif Abdurraqib and Brit Bennett for A LITTLE DEVIL IN AMERICA 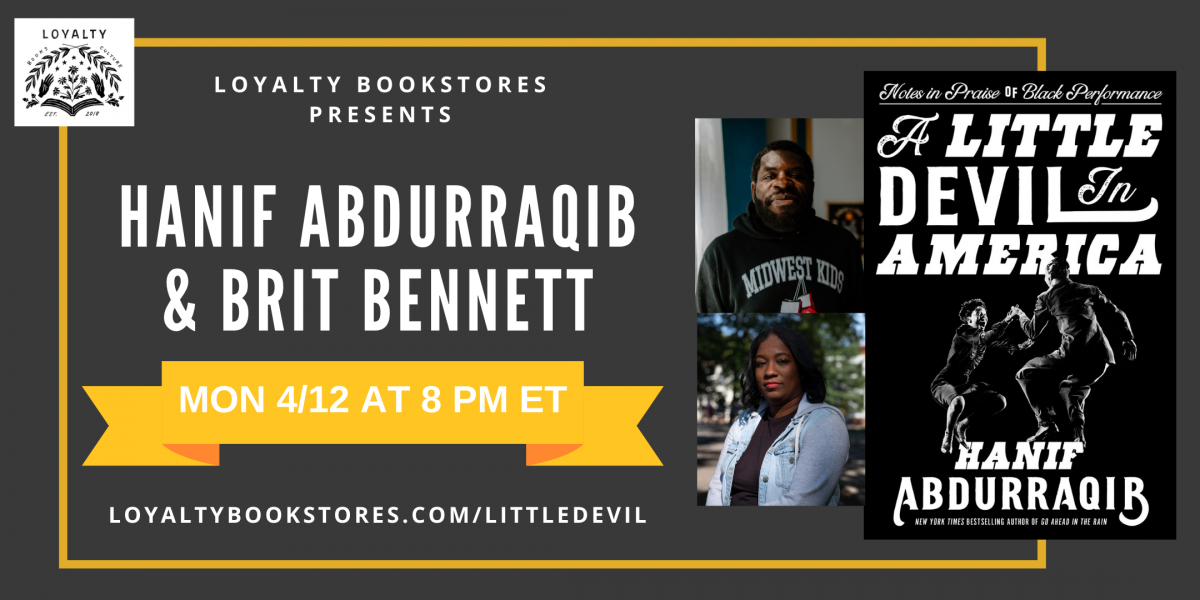 Loyalty is super psyched to celebrate the release of A Little Devil In America with Hanif Abdurraqib and Brit Bennett!! This event will be held digitally via Crowdcast. Click here to register for the event with a donation of any amount of your choice or you can order the book below to be added to the event's registration list. Donations will go to Black Lives Matter DC. There will also be an option to snag the book during the event.

“Whether heralding unsung entertainers or reexamining legends, Hanif Abdurraqib weaves together gorgeous essays that reveal the resilience, heartbreak, and joy within Black performance. I read this book breathlessly.”—Brit Bennett, author of The Vanishing Half

At the March on Washington in 1963, Josephine Baker was fifty-seven years old, well beyond her most prolific days. But in her speech she was in a mood to consider her life, her legacy, her departure from the country she was now triumphantly returning to. “I was a devil in other countries, and I was a little devil in America, too,” she told the crowd. Inspired by these few words, Hanif Abdurraqib has written a profound and lasting reflection on how Black performance is inextricably woven into the fabric of American culture. Each moment in every performance he examines—whether it’s the twenty-seven seconds in “Gimme Shelter” in which Merry Clayton wails the words “rape, murder,” a schoolyard fistfight, a dance marathon, or the instant in a game of spades right after the cards are dealt—has layers of resonance in Black and white cultures, the politics of American empire, and Abdurraqib’s own personal history of love, grief, and performance.

Abdurraqib writes prose brimming with jubilation and pain, infused with the lyricism and rhythm of the musicians he loves. With care and generosity, he explains the poignancy of performances big and small, each one feeling intensely familiar and vital, both timeless and desperately urgent. Filled with sharp insight, humor, and heart, A Little Devil in America exalts the Black performance that unfolds in specific moments in time and space—from midcentury Paris to the moon, and back down again to a cramped living room in Columbus, Ohio.

Hanif Abdurraqib is a poet, essayist, and cultural critic from Columbus, Ohio. His poetry has been published in PEN American, Muzzle, Vinyl, and other journals, and his essays and criticism have been published in The New Yorker, Pitchfork, The New York Times, and Fader. His first full-length poetry collection, The Crown Ain’t Worth Much , was named a finalist for the Eric Hoffer book award and nominated for a Hurston-Wright Legacy Award. His first collection of essays, They Can’t Kill Us Until They Kill Us was named a book of the year by NPR, Esquire, BuzzFeed, O: The Oprah Magazine, Pitchfork and Chicago Tribune, among others. Go Ahead in the Rain: Notes to a Tribe Called Quest was a New York Times bestseller and a National Book Critics Circle Award and Kirkus Prize finalist and was longlisted for the National Book Award. His second collection of poems, A Fortune for Your Disaster, won the Lenore Marshall Poetry Prize. He is a graduate of Beechcroft High School.

Born and raised in Southern California, Brit Bennett graduated from Stanford University and later earned her MFA in fiction at the University of Michigan. Her debut novel The Mothers was a New York Times bestseller, and her second novel The Vanishing Half was an instant #1 New York Times bestseller. She is a National Book Foundation 5 Under 35 honoree and in 2021, she was chosen as one of Time’s Next 100 Influential People. Her essays have been featured in The New Yorker, the New York Times Magazine, The Paris Review, and Jezebel.

A Little Devil in America: Notes in Praise of Black Performance (Hardcover)

A Fortune for Your Disaster (Paperback)

Go Ahead in the Rain: Notes to A Tribe Called Quest (American Music Series) (Paperback)

They Can't Kill Us Until They Kill Us (Paperback)

The Vanishing Half: A Novel (Hardcover)

The Mothers: A Novel (Paperback)