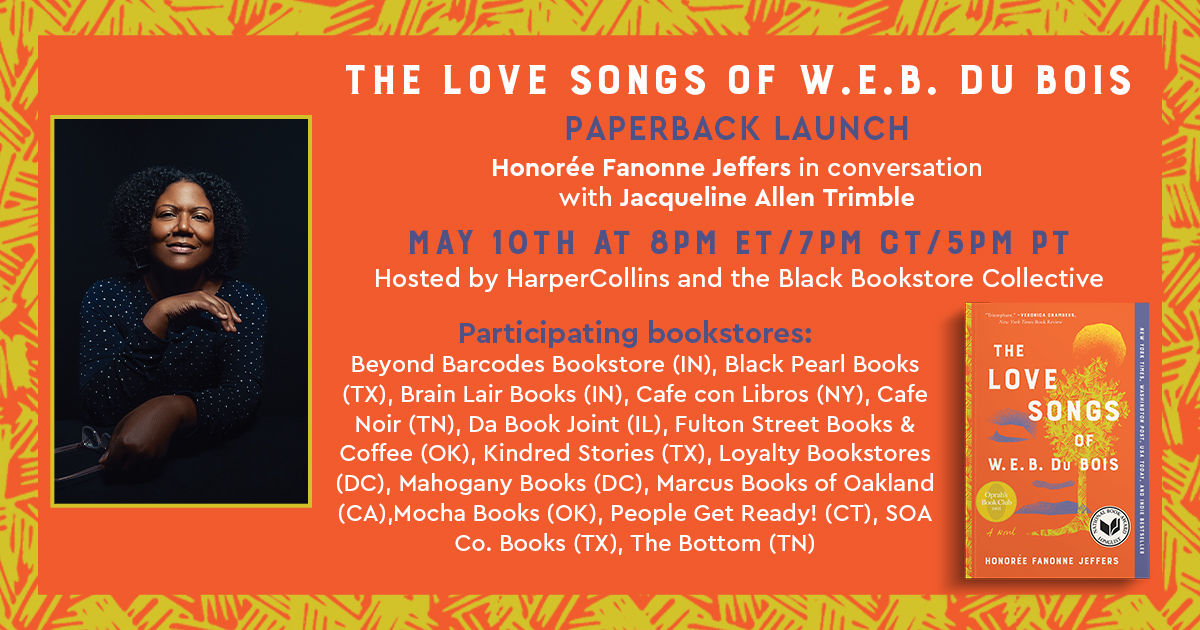 Honorée Fanonne Jeffers, in conversation with Jacqueline Allen Trimble, celebrates the paperback launch of her bestselling, award-winning novel The Love Songs of W.E.B. Du Bois, hosted by HarperCollins and the Black Bookstore Collective. This event is free to attend and will be held digitally via Crowdcast. Click here to register for the event. You can also order a copy of the book below to be automatically added to the registration list. *Plus, receive a signed bookplate when you order your copy (while supplies last)!*

Winner of the National Book Critics Circle Award for Fiction and selected for Oprah’s Book Club, Barack Obama’s Favorite Books of 2021 and a host of other accolades, The Love Songs of W.E.B. Du Bois is a magisterial epic—an intimate yet sweeping novel with all the luminescence and force of Homegoing; Sing, Unburied, Sing; and The Water Dancer—that chronicles the journey of one American family, from the centuries of the colonial slave trade through the Civil War to our own tumultuous era.

Honorée Fanonne Jeffers is a fiction writer, poet, and essayist. She is the author of five poetry collections, including the 2020 collection The Age of Phillis, which won the NAACP Image Award for Outstanding Literary Work in Poetry and was longlisted for the National Book Award for Poetry and the PEN/Voelcker Award. She was a contributor to The Fire This Time: A New Generation Speaks About Race, edited by Jesmyn Ward, and has been published in the Kenyon Review, Iowa Review, and other literary publications. Jeffers was elected into the American Antiquarian Society, whose members include fourteen U.S. presidents, and is Critic at Large for Kenyon Review. She teaches creative writing and literature at University of Oklahoma. Her first novel The Love Songs of W.E.B. Du Bois, published in August 2021, was selected for Oprah’s Book Club and awarded the National Book Critics Circle Award for Fiction. The novel was also long listed for the National Book Award, short listed for both the Center for Fiction First Novel Prize and the NAACP Image Award for Outstanding Literary Work by a Debut Author, and has been named a finalist for the PEN/Hemingway Award for Debut Novel.

Jacqueline Allen Trimble lives and writes in Montgomery, Alabama.  She is a National Endowment for the Arts Creative Writing Fellow (Poetry), a Cave Canem Fellow, and an Alabama State Council on the Arts Literary Fellow. In addition to her academic work, her poetry has appeared in various journals including Poetry Magazine, The Louisville Review, The Offing, and Poet Lore and has also been featured as the poem of the day by Poetry Daily and Duke University’s Hart Leadership Program. Her work is included in the anthology The Night’s Magician (Negative Capability Press), a collection of eighty poems by contemporary writers on the moon, and an essay on writing, “A Woman Explains How Learning Poetry is Poetry and Not Magic Made Her a Poet,” appears in Southern Writers on Writing (University Press of Mississippi), an anthology of twenty-six contemporary Southern writers. She wrote five episodes for Die Testament a South African soap opera that streamed on Netwerk24 in fall of 2019 and eight episodes for the second season, Die Testament 2, which aired in spring 2022.   Published by NewSouth Books, American Happiness, her debut poetry collection, was named the Best Book of 2016 by the inaugural Seven Sisters Book Awards and won the 2016 Balcones Poetry Prize. The ironically titled book examines America’s refusal to grapple with hard truths, preferring instead the pretense that everyone and everything is just fine. Of the work Honorée Jeffers wrote, “I longed for her kind of poetry, these cut-to-the-flesh poems, this verse that sings the old time religion of difficult truths with new courage and utter sister-beauty.” New work will appear in The Beautiful, a collection of visual poems representing each state of the U.S., which will also be featured in a traveling art exhibit. Her new poetry collection, How to Survive the Apocalypse, is forthcoming from NewSouth Books in August 2022. Randall Horton writes about the collection, “Not since Carolyn Rogers have we heard a voice this bold buttressed by poetic craft. It’s all here—the energy and excitement of Black idiom reimagined as contemporary art, the beautiful defiance of a balled fist disguised as love.” Trimble is Professor of English and chairs the Department of Languages and Literatures at Alabama State University.

The Love Songs of W.E.B. Du Bois: A Novel (Paperback)

How to Survive the Apocalypse: Poems (Hardcover)