Kelefa Sanneh and Will Welch for MAJOR LABELS 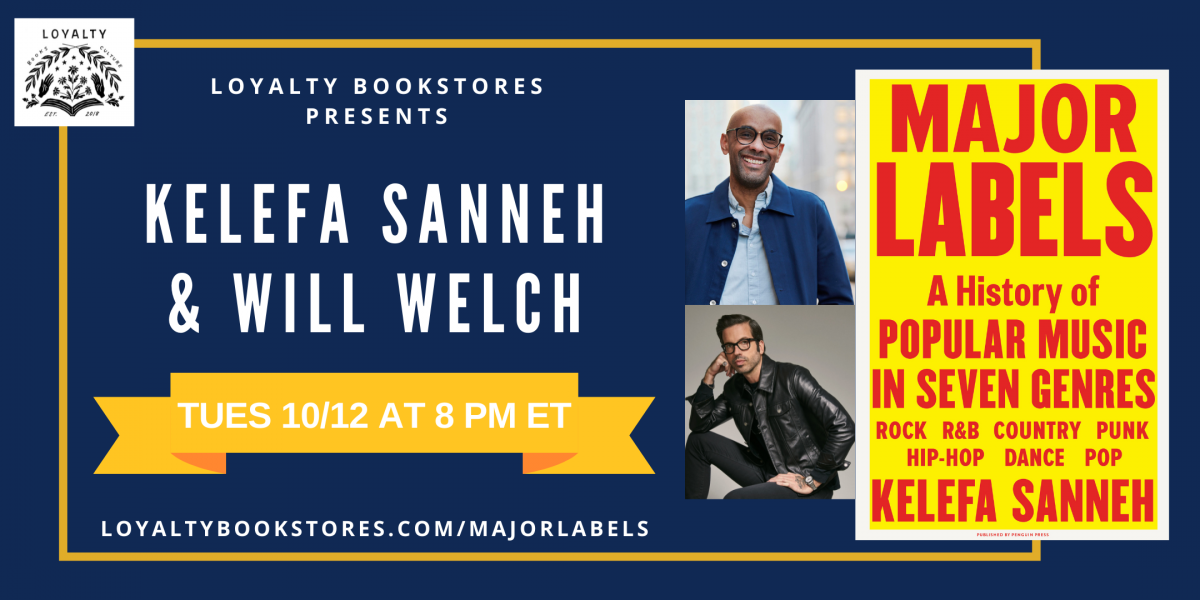 Loyalty is so excited to celebrate Major Labels: A History of Popular Music in Seven Genres with Kelefa Sanneh and Will Welch! This event will be held digitally via Crowdcast. Click here to register for the event with a donation of any amount of your choice or you can order the book below to be added to the event's registration list. Donations will go to BLM DC. There will also be an option to snag the book during the event.

An epic achievement and a huge delight, the entire history of popular music over the past fifty years refracted through the big genres that have defined and dominated it: rock, R&B, country, punk, hip-hop, dance music, and pop

Kelefa Sanneh, one of the essential voices of our time on music and culture, has made a deep study of how popular music unites and divides us, charting the way genres become communities, shape-shifting across the years, giving us a way to track larger forces and controversies. In Major Labels, Sanneh distills a career's worth of knowledge about music and musicians into a brilliant and omnivorous reckoning with popular music--as an art form (actually, a bunch of art forms), as a cultural and economic force, and as a tool that we use to build our identities.

As Sanneh unspools the stories of the genres that have defined popular music, the connections build, and big themes accrue momentum: the tension between mainstream and outsider, between authenticity and phoniness, between good and bad, right and wrong. Throughout, race is a powerful touchstone: just as there have always been Black audiences and white audiences, with more or less overlap depending on the moment, there has been Black music and white music, constantly mixing and separating. Sanneh debunks cherished myths, reappraises beloved heroes, and upends familiar ideas of musical greatness, arguing that sometimes, the best popular music isn't transcendent. It expresses our grudges as well as our hopes, and it is motivated by greed as well as inspiration; music is a powerful tool for human connection, but also for human antagonism. The book will intoxicate music nerds, even as it serves as a heady gateway drug for occasional listeners, or even non-listeners. The opposite of a modest proposal, Major Labels takes on the whole extraordinary range of popular music over the past half century, and it pays in full.

Kelefa Sanneh has been a New Yorker staff writer since 2008, before which he spent six years as a pop-music critic at The New York Times. He is also a contributor to CBS Sunday Morning. Previously, he was the deputy editor of Transition, a journal of race and culture based at the W. E. B. Du Bois Research Institute at Harvard University. His writing has also appeared in a number of magazines and a handful of books, including Shake It Up: Great American Writing on Rock and Pop from Elvis to Jay Z, a Library of America Special Publication, and Da Capo Best Music Writing (2002, 2005, 2007, and 2011). He lives in New York City with his family.

Will Welch is the global editorial director of GQ, the editor-in-chief of GQ U.S., and the founding editor of GQ Style. Prior to joining GQ, Welch spent four years at the music, fashion, and lifestyle magazine The Fader, where he was deputy editor.